In one of the next updates, we will add many improvements to the "Enduring Confrontation” mode.

In this screenshot, you can see the front line in its current form. This is the way it’s been ever since the mechanic was introduced to the game.

The red squares mark the sectors of the map that represent the actual position of the front line. The reddish-blue line on the map is nothing more than a convenient visualisation of the actual state of affairs.

With the current implementation of the front line mechanic, the game doesn’t know anything about whether a given square on the map belongs to one side of the conflict or the other. It just keeps track of the “front line” squares – seven separate map sectors. As a result, ground vehicles can spawn in the enemy’s territory, especially in situations where the front line has advanced a long way forward or backward in a certain map sector. This is especially relevant for squares the front line is passing through.

Additionally, in its current implementation, the front line can only move in two directions: left or right (the principle is the same for maps where the front line moves horizontally – it can only move up or down). As we can observe in the attached screenshot, this state of affairs leads to horizontal breaks, and the front itself only shifts in one of the two possible dimensions, which makes it impossible to depict encircling maneuvers or other complex front line paradigms. 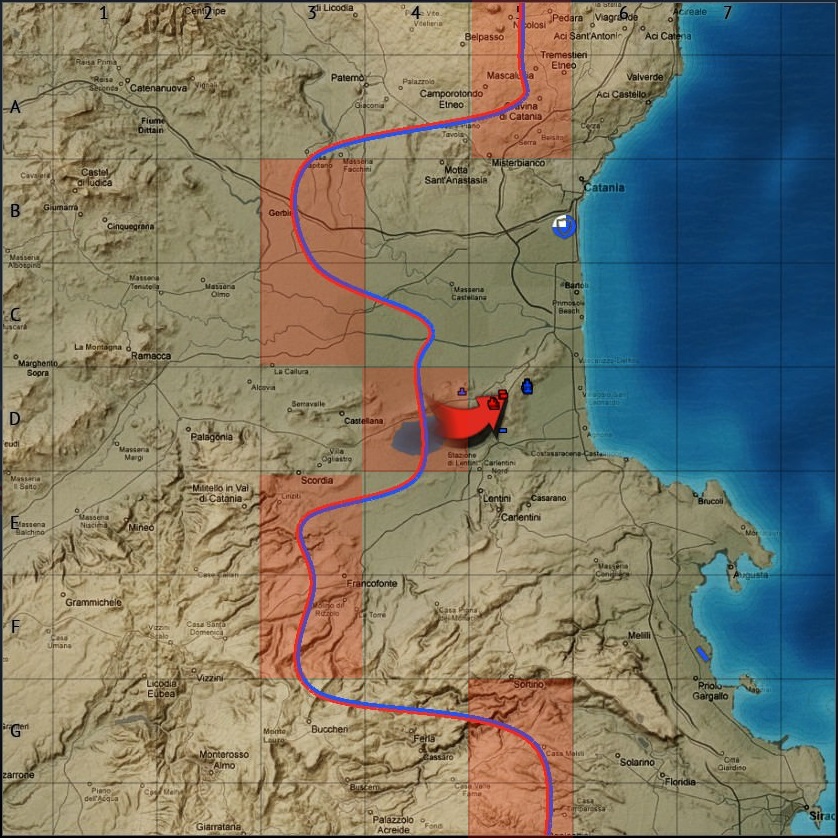 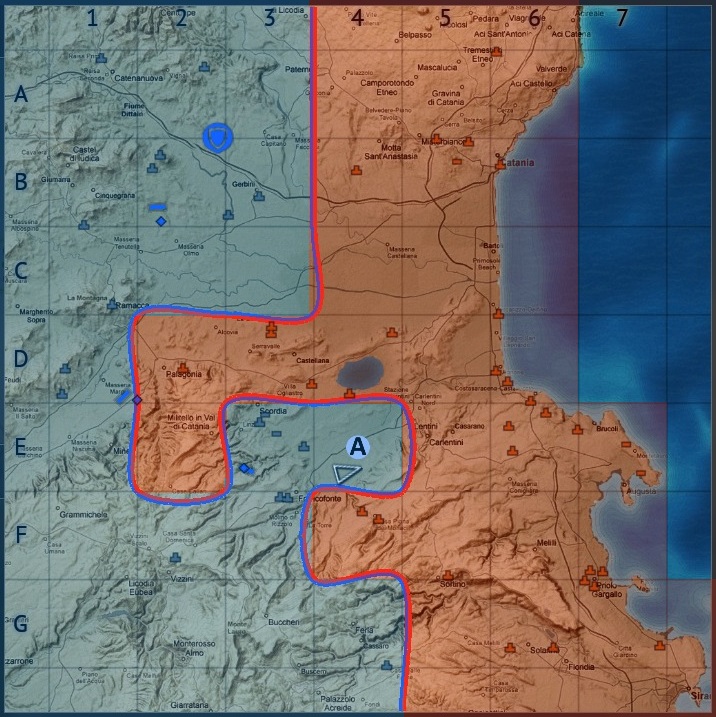 The new system unambiguously determines the side of the conflict to which every map sector belongs. It also makes use of the “not used” state – in Sicily, this applies to ocean sectors which do not have any additional colour applied to them.

In this screenshot, the map sectors controlled by the German army are marked in blue (in this case we’re fighting on the German side), and the Allied sectors are in red. This division by colour has been added to the screenshot for the sake of clarity. It won’t be used in the game.

The new implementation of the front line solves several problems at once. One of these problems is unit placement: as you can see, although the outline of the front line in the screenshot is rather complex, both teams’ units are placed on the map correctly, each on their own side.

The reddish-blue visualisation line is now drawn along the exact front line, and the front line itself is now a barrier between two sectors belonging to the different sides.

In addition, the front line can now move in two dimensions – it can shift either horizontally or vertically in any mission:

In the above screenshot you can see Germany attacking Ally-controlled sector D-4 from Axis-controlled C-4. If Germany wins the land battle it will capture several adjacent sectors belonging to the Allied troops.

When a land battle is generated, in the case of a “vertical” attack like this, the units from both sides will still be placed as though the attack were being conducted horizontally, but in subsequent updates, additional zones will be added that will allow units to be placed more correctly. Since these zones will have to be added to all existing mission and all potential options for the positioning of ground battles within them, adding them is going to be a time-intensive process.

In future updates to this mode, we are planning to make it possible for encircling maneuvers to have a real impact on the course of the game and for missions to react accordingly. We are also planning to add new templates corresponding to this state (such as supplying the surrounded forces). 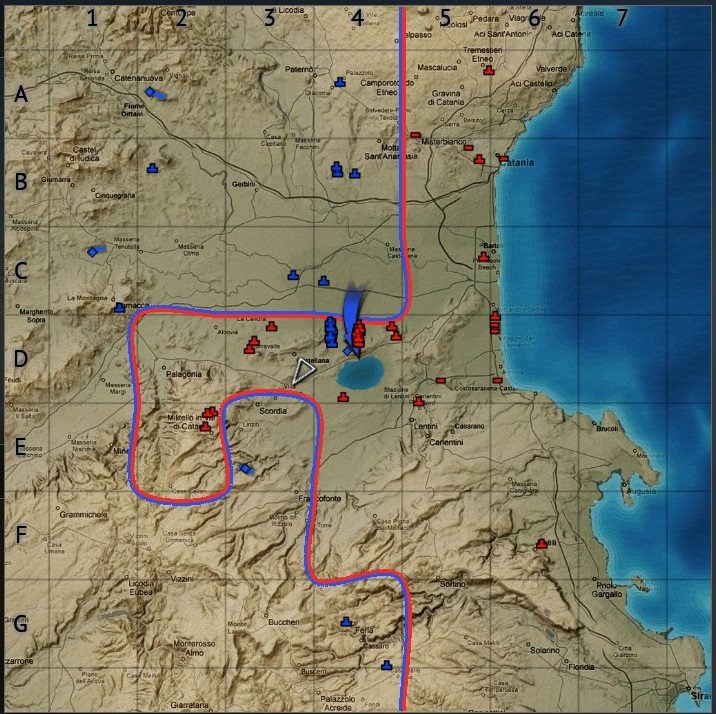 In this screenshot, you can see the letter A in sector E-4 next to the front line:

This is a new PvP template called "Air Supremacy." It is intended for fighters. Objective like this will appear in various areas near the front line from time to time. They represent an air zone the size of a map sector with an altitude of 6,000 meters. The team that captures this zone in an air battle will complete the objective. The teams will have 15 minutes to complete this objective, and it takes a single aircraft 450 seconds (from neutral state - grey) to capture the zone, with the speed of capturing the point being proportional to the number of aircraft attempting to capture it. A side can only capture the zone if there are no enemy aircraft at all (not counting AI planes) within it.

If one of the teams captures the zone, that team completes the objective and earns extra victory points. After a while, a land battle will also begin in this sector in which the team that captured the air zone will be the attacking side. If Germany (the blue side) captures the air zone in the example provided, after a while Germany’s ground forces will begin an attack from E-4 in one of three potential directions: D-4, E-5, or F-4. If the Allied players (the red team) capture the zone, an Allied attack will be conducted against E-4 from D-4, E-5, or F-4. Attack aircraft pilots will thus be able to predict likely areas in which a large number of ground troops will be stationed and prepare in advance.

Changes to Objectives for Bombers

When enemy airfields are found, objectives to destroy them will no longer be displayed in the log. We assume that bomber pilots are pretty used to the symbols on the map and understand that these symbols alone mean that the targets are available. Nevertheless, destroying airfields will still earn victory points for the team and rewards for the players. This change will allow bombers to focus less on airfields and free up space in the log (which, depending on graphical settings, frequently does not fit on many players’ HUDs) so that less obvious and repeating objectives can be shown there. Bombers will still be given objectives to destroy bases as before.

A new confrontation that adds battles on the Franco-Belgian border, where German troops crossed the Maginot Line.

Wind has been added to this mission for testing purposes (northeasterly, 4-8 meters per second).

Commenting is no longer available for this news
Rules
nsgallup
33

YAY good to see some work on this mode, EC should be permanent

"In future updates to this mode, we are planning to make it possible for encircling maneuvers to have a real impact on the course of the game and for missions to react accordingly" could we see AI or even player controlled (troop)transport aircraft like the Ju 52, DC3 (C-47), Me 323 and more? It would add the extra immersion of having to supply troops. Maybe even a Stalingrad event?

It'd be cool ye but unlike the other game we r thinking off, in WT there will be no other use of these vehicles besides a game mode like EC, World War Mode and perhaps Historical Battles if they bring it back

Len_Wolf, „World War Mode and perhaps Historical Battles” any news on this? I really miss the weekly Historical Events.

I absolutely loved the last EC session! Both Russia and the Japanese were pretty balanced. I'm trying to think of something to improve the endgame though. Everyone leaves as soon as it is clear one side is going to win.

Ouiche, What happened to our pacific EC map?? There are no pacific battles in EC which is lame! There use to be one before the new room system was implemented, but even then it was very rare to get a match.

I've had that bite us, we had a great squad on our side 'win' us the game, then figured the casual players were going to 'win' it for them. We did, but barely, if they stayed in slightly longer, it'd be better.

The last iteration of RB EC was already promising, seemingly things are slowly coming together. This is a welcome expansion on the frontline mechanism. The only major problem that still seems to persist in EC is that its possible for a side (or both) to trickle out of players. While occasionally its nice to be in a smaller match, its not fun when only one player keeps on playing for one side. Thanks for providing infos on the development of this great mode, keep on! hope to see another soon

Aye, the matches should refill if the game is about even. If either side knows they'll win or lose, they'll stop sending forces. But if the match is even I see no reason to not have late entries in a close match.

Very exciting! Is the wind you mentioned only in simulator battles, or in RB as well? (if it comes to RB as an event)

It's for Enduring Confrontation in general. (SB and temporary RB events)

Ouiche, Not sure if this the right place to post, but I would love to see the Old Historical Battles Mode return and be another mode sorta alongside regular RB. Regular RB is good but I would not mind long wait times and long battle times to have some historically accurate missions to play.