The M4A4 (SA50), also known as the M-50 Super Sherman, is a modified Israeli version of the well-known and widely used American Sherman tank. This unique Sherman modification comes to War Thunder as part of the French ground forces research tree coming with War Thunder update 1.75!

In the early 1950s, Israel considered purchasing the new French AMX-13 light tank. Although Israel admired the performance of the AMX-13’s SA-50 75mm cannon, it was deemed too lightly armored and they abandoned the purchase. Instead, Israel purchased the 75mm SA-50 cannon only, which would be fitted onto the reliable, battle-tested stock Sherman chassis—which was already fielded and favored by the Israeli military in 1954.

The result of this combination was the M-50 Super Sherman, which Israel continued developing and improving well into the second half of the 20th century. By 1964, several hundred Sherman tanks armed with the 75mm SA-50 cannon were manufactured and used until the early 1980s, after which they were phased out of active duty. 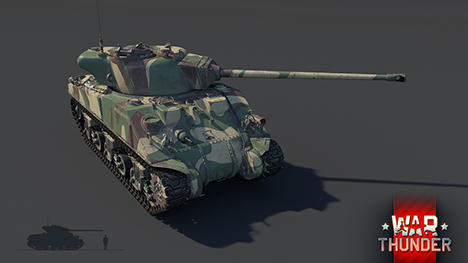 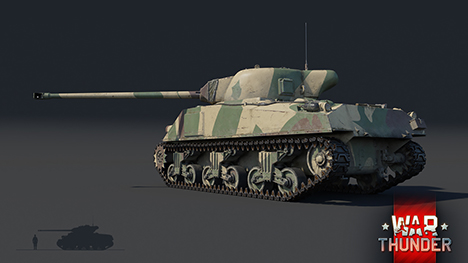 In War Thunder, the M4A4 Sherman, equipped with the 75mm SA-50 cannon, will offer a different experience from the well-known Sherman formula that many players are familiar with. Israeli engineers made only minor changes to the initial design of the Sherman, and the hull, suspension, tracks, engine and transmission remained the same.The most significant change was made to the primary armament and turret, which the Israeli engineers modified by adding a new gun mantlet and counter weight on the back of the turret to house radio equipment and balance the long-barreled 75mm cannon.

Overall the M4A4 (SA50) is very similar to the British Sherman Firefly, both visually and performance-wise. But anyone can use the M4A4 (SA50) to enjoy raining death and destruction upon the enemy.  The SA-50 cannon features excellent ballistic properties, and even less experienced tankers can quickly become accurate and deadly with it.

The M4A4 SA50 rolls into War Thunder as a mid-rank, medium tank in the new French ground forces research tree in the upcoming War Thunder 1.75 update. Stay tuned and watch for more news about the latest developments coming in War Thunder’s next major update!