The Lorraine 40t is a French, experimental tank with an auto-loading cannon and a classic French tank design feature: the oscillating turret. How will it fare against German Tigers and Soviet IS tanks? Let’s find out!

At the end of the 1940s, during development of the AMX-50 heavy tank project, French engineers also decided to try creating a lighter tank that could serve the same role as the AMX-50.

The project was initially designated “40 ton battle tank”. Later, the vehicle was called the Lorraine 40t, based upon the name of the region in which the experimental prototypes of it were built. The tank used many of the same technological developments of the experimental AMX prototypes, and was clearly influenced by the German Tiger II, Panther/E-50, and the Soviet IS tanks.

With armor plating at a maximum thickness of 45mm, the Lorraine 40t isn’t as well armored as the AMX-50. The designers, however, set the armor plates on the Lorraine 40t at clever angles and implemented a chevron shape for the front of the hull (for which the tank is known). This effectively armored the most vulnerable parts of the front projection and effectively exceeded the equivalent of 90mm armor..

In addition, the Lorraine 40t’s lighter armor significantly reduced its weight, thereby increasing its speed and allowing the use of steel paired roller wheels with bulletproof tires. Combined with the 850 horsepower German Maybach engine, the Lorraine 40t could reach 60 km/h, move smoothly and fire effectively at low speeds. 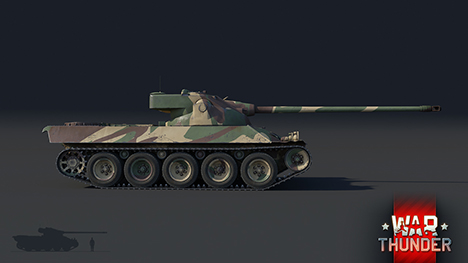 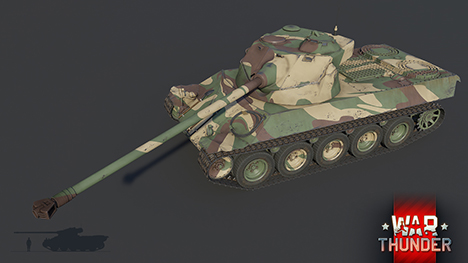 The Lorraine 40t is a very well-balanced, fast, and powerful vehicle sure to find fans among War Thunder’s tankers. It is equipped with a 100mm, autoloading, rifled SA 47—a powerful cannon that can pierce more than 220 mm thick armour at 500m distance with armour-piercing shells. In addition, the tank’s drum-style autoloader holds 7 shells in a clip, giving it a higher rate of fire than its contemporaries (and War Thunder players more opportunities for a successful hit). All of this heavy-hitting firepower is packed into an oscillating turret—a turret design in which the turret is made of two hinged parts and affords higher gun placement, quicker rotation, and other advantages over standard turret designs of the time.

Due to its lighter armor, the Lorraine 40t is also very quick. Its nimble gearbox allows speeds up 60 km/h on roads, and over 40 km/h off-road. And even with its lighter armor, the front section of the Lorraine 40t’s hull has a good chance of causing a ricochet when struck by enemy fire. In addition, its gun mantlet is also difficult to pierce. Although it is fast and packs a powerful punch, the Lorraine 40t still has some disadvantages. Its sides and rear are more lightly armored, and three of its four crew members were seated in the turret. These disadvantages can seriously reduce the tank’s survivability if played recklessly.

Be the first to lead this beauty into battle!