The M.B.174A-3 and the A-35B are now available for research and purchase for all players.

The American Vultee A-35B dive bomber didn't really catch on in its homeland, but it received a warm welcome in the air force of Free France!

At the beginning of the 1930s, the American company Vultee was developing a concept for a strike aircraft capable of effectively hitting ground targets, light vehicles and enemy infantry from low altitudes. Effective actions by Germany’s Ju-87 dive bombers in Europe served as a basis for the creation of a concept for the American A-31 Vengeance, a strike dive bomber with a machine gun battery in its wings. This new addition immediately caught the attention of the British delegation, which happened to be searching for a design like the Stuka to aid in the fight against Germany. In the course of modernization, the A-31 received a new 1700 hp engine and strengthened armament of five, and then seven high-caliber Browning machine guns (six in the wings and one more for defense against attacks from the rear), and a bomb load of up to 2000 pounds. Modernized version got new designation - Vultee A-35. In spite of a large export order, the Vengeance also served in the American air force and navy, and the reviews about it were contradictory. For the war in Europe, the bomber turned out to be ill-prepared. Its low speed, large silhouette and need to descend to drop its bombs made it very vulnerable to enemy flak cannons and fighters. However, in the Pacific Theater the vehicle performed well. The Japanese had far fewer anti-aircraft defenses, and the Vengeance served as an attack aircraft, a bomber and a submarine hunter.

Nonetheless, the main operators of the A-35 were foreigners. Several squadrons in the British Air Force were equipped with these dive bombers. The aircraft was delivered to Australia and Brazil, and it served in the Free French Army in Africa. 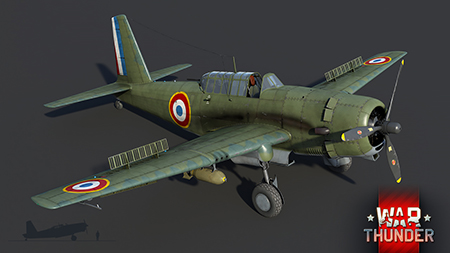 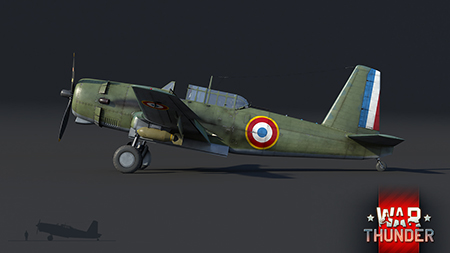 We present the A-35B model in the French Air Force tree. In the game, this is a rank II dive bomber capable of carrying up to 2000 pounds of bombs and armed with 6 machine guns. The A-35B is slow, but it is perfectly suited for destroying small ground targets with bombs and machine guns, since aiming while diving is significantly simplified with the use of the airbrake.

The A-35B’s defenses are also reasonable for its rank. The gunner controls a high-caliber machine gun on a pivot, and with the right skills and luck, the Vengeance is fully capable of overwhelming a troublesome pursuer before losing control or burning up. Overall, this is a typical initial-rank dive bomber with its own advantages and disadvantages. For effective actions, the pilot needs situational control in the skies and on the ground, and preferably cover from allied fighters, to deliver its bombs to enemy tanks or pillboxes.

Have you had the chance to try the A-35B’in battle yet? Maybe you’ve been on the receiving end of one? Let us know about your experiences with the A-35B’ in the comments below. Until next time!

Commenting is no longer available for this news
Rules
FunThomasTheBron
17

A-35 is kind of like the P-66 which was never used by the US. SB2C-5 is barley unique other than it's fuel and cockpit, plus the french flew more than us, I believe. The AD-4, I can see them adding into America because it was used by America in the Vietnam war and would be a god upgrade to the AD-2.

Holy crap. We get some new vehicles and a new nation, and people are actually complaining. Can you say say entitled?

Because said vehicle wasn't used in combat nor intended to by the Free French apparently, yet would make an excellent addition as a premium/event vehicle for the UK. That and not to mention they're plenty of other aircraft to fill its role such as the A-24 Banshee.

i regret even paying 10 dollars for france... 8 American planes in a row and their end game is mediocre the vb10 is one big meh. it doesn't have to be op, but its just not fun using france at all or flying a blasted bearcat again

"received a warm welcome in the air force of Free France" Yes all 67 of them which were restricted to training operations before being withdrawn as they were breaking because didn't implement the improvements recommended by the RAF & RAAF (who used over 600 of the various models of Vengeances operationally) :') Really though the Vengeance should be in the British Tree, we made far better use of them. Even as a Premium, in fact it would make a perfect Premium & a pretty useful one at ...

Yes, I a rather disappointed In Gaijin's decision here. But to be honest, this isn't their first blunder like this, after all they were the ones who thought it would be a good idea to add the Canadians into the American tree, rather than the British...

When AD-4 will be available in US tree? It’s an american plane overall!

I don't play the French air tree, but this looks like a nice plane :)

Isnt it enough to add half of freaking us tree to french tree?

Stona_WT, he means it metaphorically speaking. it's true though, like the japanese tanks. they're just american tanks with japanese camouflages.

Lot's of complaints about this being an "American" plane. Well, to be fair, it was designed and built in the US. But it wasn't used in the U.S. Honestly, for France, what else is Gaijin supposed to do? There are gaps in French development because of the occupation. People wanted France, so they made it work by resorting to American models to plug some holes. I like the A-35 pick because it wasn't used by America.

You mean like how they were only used for training by the Free French like the US did, with the US by comparison having 4x as much or that those who were to actually use it would be Commonwealth/UK? France isn't even noted as one of the primary users.

abullen, British Tree or French Tree. Don't care. The point is that it's an option for other trees. I also return to my primary point. What was Gaijin supposed to do for France? At least, in this case, they chose an aircraft that wasn't really used by the Americans. You can already get the Catalina, the Hellcat, the Avenger and the Mustang, with the British. Furthermore, the British have access to the Typhoon, Firefly, and attack versions of the Hurricane that are all around this BR.