The M.S.410 and the Potez 633 are now available for research and purchase for all players.

Join the “Vive la France” tester team to be able to research all French aircraft without waiting!

The M.S.410 is a further development of the Morane-Saulnier M.S.406 fighter, developed in France in March 1940. The machine featured a list of improvements over the previous model, but the occupation of France in 1940 meant that the aircraft was only manufactured in limited numbers. Let’s take a closer look at one of the fighters available to pilots in the lower ranks of the French aviation tree in update 1.73 “Vive la France”.

As the M.S.406 began entering squadron service in 1939, engineers at Morane-Saulnier continued working on the design, aiming to improve it. Several changes were made to the base design, which included the replacement of the old wing design with a new one, increased and improved offensive capabilities and the replacement of the old retractable radiator with a fixed one, among others. The applied changes resulted in the new M.S.410 being able to achieve somewhat better performance than its predecessor, namely reaching a slightly higher top speed. Right after the M.S.410 entered production, France capitulated in June 1940, halting the production of the aircraft after the fifth machine was constructed.

Production of the M.S.410 was temporarily halted after the German occupation, but resumed shortly after under German supervision. Before France’s capitulation, an order for 500 M.S.410s was placed. Needless to say, this production quota was never met, even under German supervision. In the end, only around 70 examples of the M.S.410 were manufactured, most of which consisted of M.S.406 airframes being converted to the 410 standard. Even then, a large number of these machines were only partially upgraded to the 410 standard, leaving many examples as hybrid models. 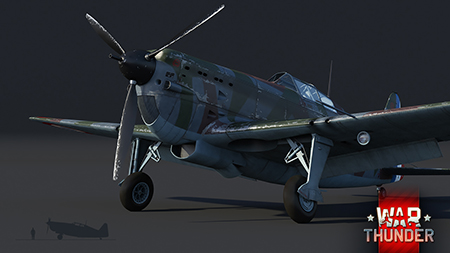 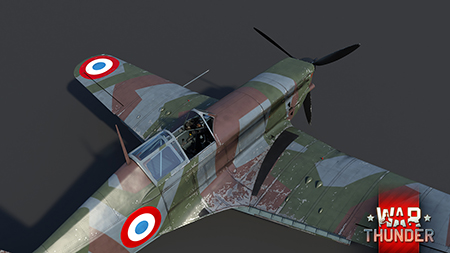 In War Thunder, the M.S.410 sits comfortably at the second rank of the newly added French aviation tree, offering pilots a true first taste of what early war French fighter design was all about. Being a further development of its predecessor, the M.S.406 (which, by the way, we also plan on introducing to the game in one of the upcoming updates - stay tuned for more information!), it’s no surprise that the two machines have a lot in common, but also share some differences that distinguish them from one another. For instance, the changes to the wing design and radiator functionality gave the M.S.410 a slight edge over the M.S.406 in terms of speed. In addition to that, the older drum-fed, wing-mounted machine guns were replaced by belt-fed ones and their number was raised to four, effectively increasing the M.S.410s offensive capabilities.

In a dogfight with contemporary fighters from other nations, the M.S.410 is more than capable of holding its own. However, be mindful of which engagements you pick to fight in! The most dangerous opponents the M.S.410 can meet in battle are early modifications of the German Bf-109 and Italian C.202 fighters. These machines easily leave the M.S.410 trailing behind when it comes to speed alone, but prove themselves as fair game in low speed energy fights and turning engagements. Once you have the target in your sights, wait for a perfect opportunity before pulling the trigger. Waiting for the enemy to make a sharp turn, exposing a large surface area of his plane is the best possible way of making the most use out of the limited ammunition capacity of the M.S.410’s single 20mm cannon. Once the cannon runs dry, you may be less conservative with your remaining ammunition, but do take note that it will take significantly more hits to bring your opponent down with machine gun fire alone.

All in all, the M.S.410 is a more than capable fighter at its rank. It combines decent maneuverability, speed and firepower into a very unsuspecting package, eager to unleash its fury at the controls of a cunning pilot. Have you had the chance to try the M.S.410 in battle yet? Maybe you’ve been on the receiving end of one? Let us know about your experiences with the M.S.410 in the comments below. Until next time!

Commenting is no longer available for this news
Rules
nsgallup
7

It's sad that the germans took the last RE 2005s and 06's and made them fight over Berlin, can imagine modelling it will be harder than normally

It's just so adorable! I just want to give it a hug.

This is one of those planes I want to fly just because of the way it looks. It's ugly beautiful.

Well, our airforce had neat little nicknames for it Roe-Belly/Hanging Belly because how it looked!

I can see the shape of the engine... cool.

Wait, so it actually is good? the looks are really decieving

i don't know if it's only me but i get less excited for devlogs that made for vehicles that are already added into the game ...

Depends, I guess, as to how much you like to learn about the history and the potentials of the aircraft.