F-84G Thunderjet: Blazing Rocketeer
11 July 2017 Vehicle Profile
Attention! This news was published on the old version of the website. There may be some problems with news display in specific browser versions.

From nearly facing project cancellation to becoming the primary strike fighter of the US Air Force in the Korean War, meet the definitive version of one of the first American close support aircraft of its kind that almost never came to be - The F-84G Thunderjet.

Development of the F-84 Thunderjet project began as early as 1944, when the Republic company proposed a new turbojet fighter aircraft intended to replace the P-47 Thunderbolt in day time operations. Following its maiden flight in 1946, the F-84 was commissioned for service in 1947 and was tasked with fulfilling the fighter-bomber role. However, due to engine reliability issues and numerous structural problems, early models of the aircraft were nearly phased out of service and production after a review of the US air force deemed them incapable of performing their intended role. Despite this, Republic’s engineers focused their efforts on addressing the flaws of the aircraft, determined they would get it right. A year and several variants later, in 1949, it seemed like the D model of the F-84 was finally shaping up to be the aircraft the US air force wanted.

However, meeting the requirements set by the air force, making the aircraft operational, didn’t mean it couldn’t be improved further to perform better. Thus development on the F-84 Thunderjet continued, and in 1951, around the start of the Korean War, the definitive G variant of the F-84 was constructed. The G model brought with it an improved J35-A-29 engine, allowed for in-flight refueling and introduced an autopilot to the navigation systems. Apart from that, one of the most significant modifications made to the F-84G was the ability to carry the Mark 7 nuclear bomb, making it also the first USAF fighter-bomber capable of packing such firepower. On the other hand, the numerous performance improvements over time gave the F-84G superb handling characteristics, also making it one of the first jets to be used by USAF flight demonstration teams. The F-84G also marks the final model of the F-84 with straight wings, subsequent models were built with a swept wing design and were renamed to “Thunderstreak”.

In total, around 4,500 F-84 Thunderjets were built across all its modifications. The G model made up for a considerable part of all F-84s, with approximately 3000 units built. Nearly 2000 F-84Gs were built for France, Italy, Belgium, Turkey and other NATO countries under the MDAP military assistance program. Non-NATO countries like Yugoslavia, Iran, Thailand and Taiwan also received small numbers of F-84Gs for their air forces. Thunderjets saw their peak in service with countries all over the world during the 1950s, being slowly phased out of use throughout the 60s with some countries and being completely taken out of service by the end of the 70s.

In War Thunder, the F-84G was introduced in Update 1.69 “Regia Aeronautica”, as part of the new Italian aviation research tree. There, it represents the final aircraft players can get when going down the Italian attacker line. And what a magnificent attacker the F-84G is! After obtaining the corresponding secondary weapon pylons, pilots of the F-84G will be able to equip their planes with an impressive array of bombs and rockets to go with their standard six .50 caliber M3 machine guns, mounted in the nose and wing roots of the aircraft. Thanks to this overwhelming amount of firepower, players will virtually be able to take on a small army all on their own, if necessary. However, the F-84G is not just an excellent ground attacker, but also a very potent fighter if no load is attached underneath the wings. Capable of reaching speeds close to 990 km/h (615 mph) at sea level without suffering from a major loss of controllability, this speed demon is certainly one of the fastest and most formidable jet fighters at its battle rating. 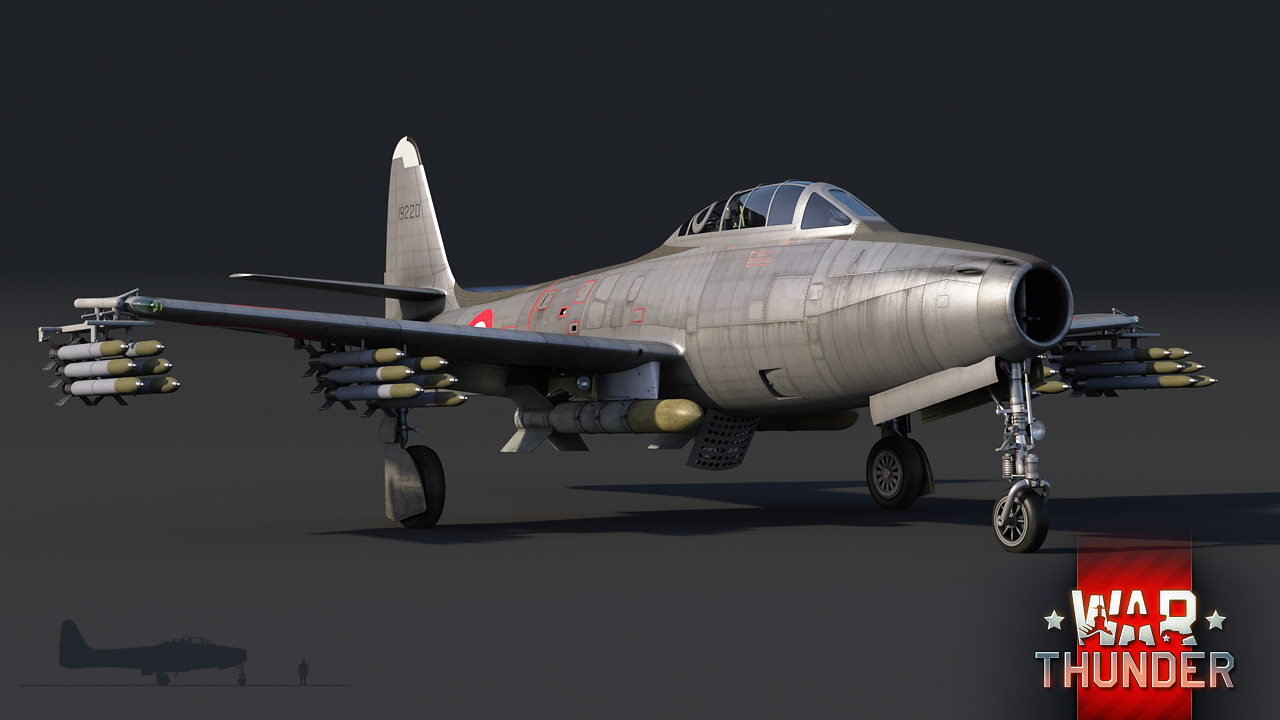 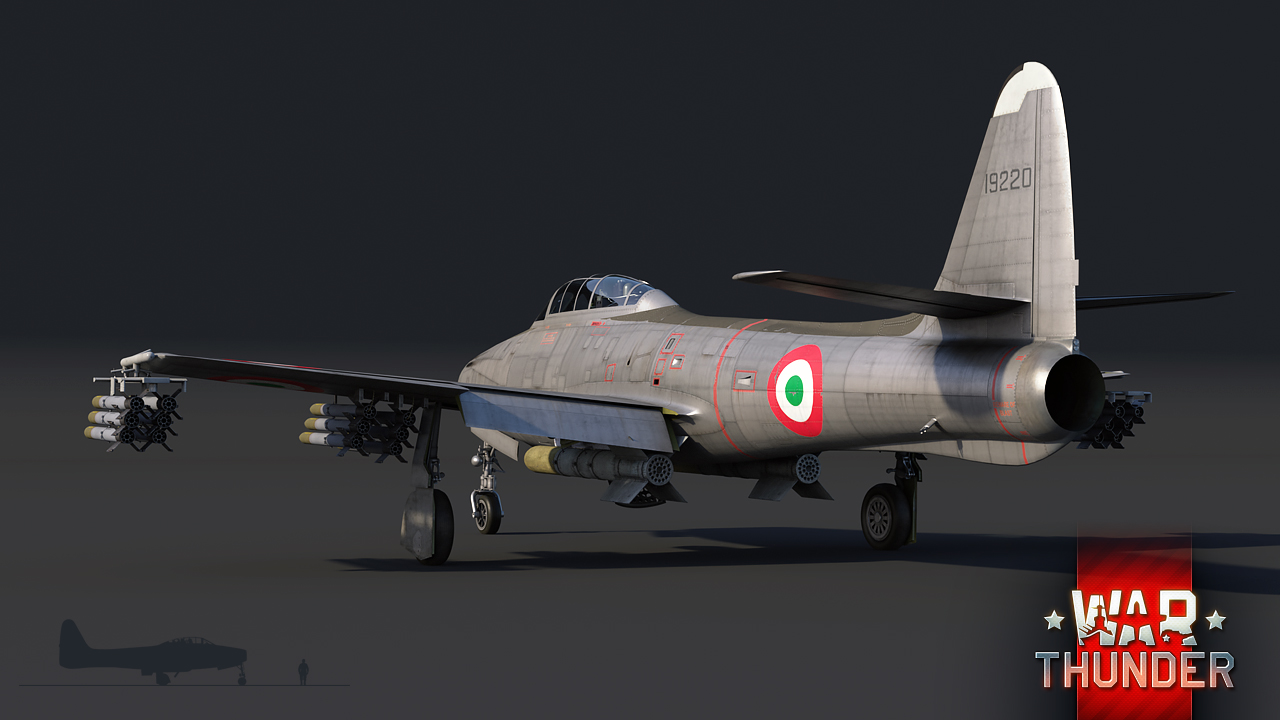 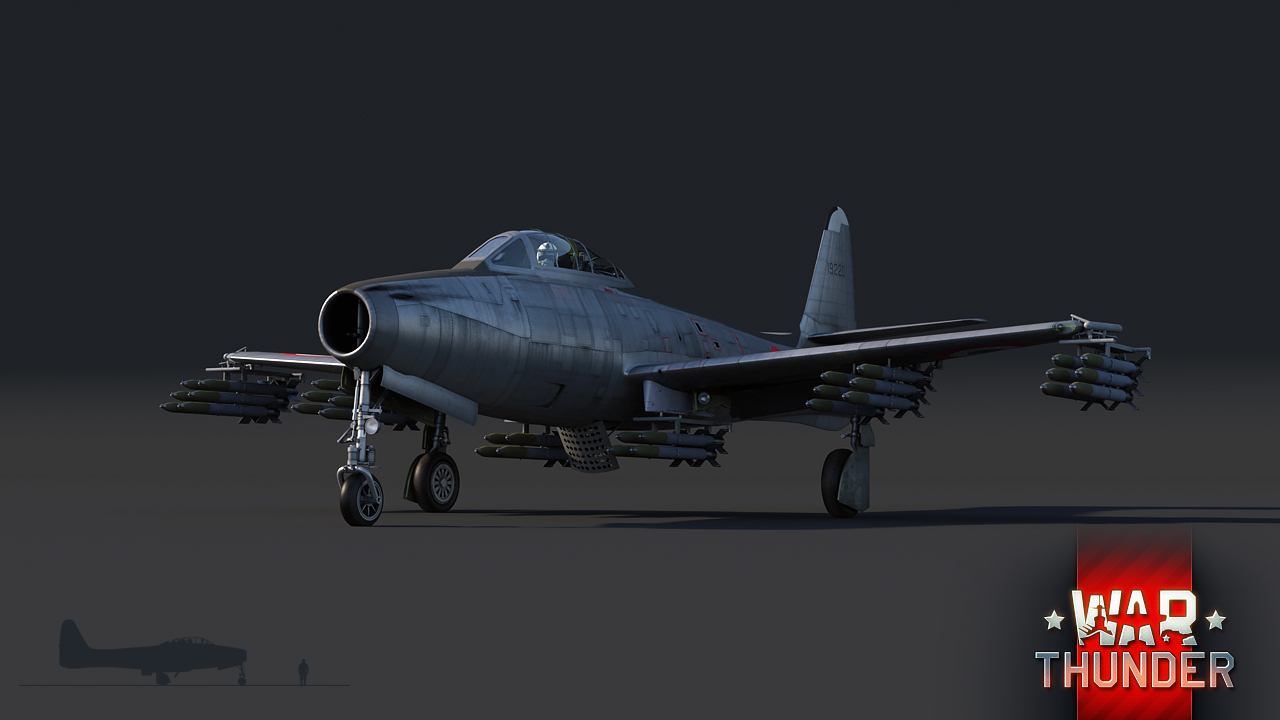 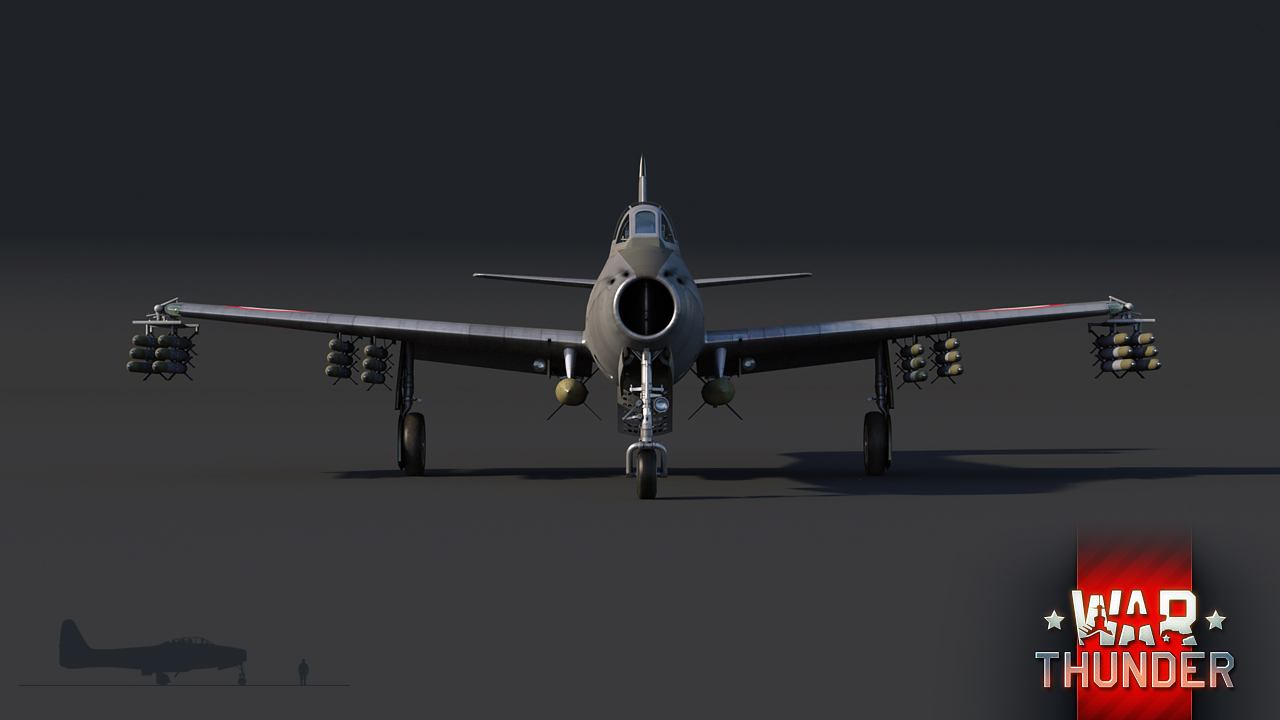 As with all jets, maintaining speed is key to winning single engagements, meaning that sharp turns and frequent maneuvering are best to be avoided in order to preserve speed. Conduct quick and accurate passes on your enemy, ideally from above, but never focus on a single target alone - this will ensure maximum combat efficiency and a minimal chance of getting caught off guard. Given the F-84G may often find itself fighting alongside piston engine aircraft, it’s recommended for pilots to prioritise enemy jets first. This way, they’ll be protecting their slower teammates by taking down the most dangerous opponents for them first and will be able to assist them in the later stage of a match in clearing out the remaining enemy force.

Tell us what you think about the F-84G and share your own experiences about it with other players in the comments below. Until next time!

Commenting is no longer available for this news
Rules
solltu
7

It is in the Italian tech tree currently.

OrsomM, The F-84F is the swept wing Thunderstreak. Not the F-84G straight wing Thunderjet. And hopefully America gets a new jet sometime. Sucks another nation gets a better version of an American plane lol.

Just saying but the plane at its current br is overpowered.

We are planning to adjust BR of Italian aicraft based on the data and player's feedback in future as well as for other vehicles, stay tuned.

Thulle_, The best way to put him in br 100 to fight with ufo ... i hate when peoples crying and says op this, op that .... every plane is op when u learn hot to fly with him and research all modifications. And i don't understand Gajin why you listen this peoples, make the game and thats it, like battlefield 3,4 and 1 ... all battlefield have bugs and mistakes in game but thats it, if u dont like unistall dont crying please "do this do that its op this is not op bla bla bla bla". Bye ;)

I agree. It performs too well for 7.3. An option except increasing BR would be to make all F84s rip at lower Gs than currently, making them less able to use their superior speed to catch you in any high G maneuver

I highly doubtful Gaijin will add the Nuclear Genie rockets.

*jbpd11, We will not add nuclear weapon to game.

*TheLastYouSee__, Just like Germans got better engine in sabre than US sabre

Look at the numbers produced, and this plane being used in the Korean War. I personally think it's BS that italy gets this thing, and the US is just stuck with a plane that just doesn't do what this thing does, in the same MM. This is hell for allied jet teams right now, G.91s and F-84Gs are just clubbing the allies, who don't really have anything to compete.

get the f84 to turn...it will screw him over so so badly

I don't disagree neccesarily that the US should get a G-variant as well, but let's be fair, the F-84B is already the king of 7.0. The only thing that even comes close to competing with it is the MiG-9/L, and the thing shits on German 6.7-7.0 jets.