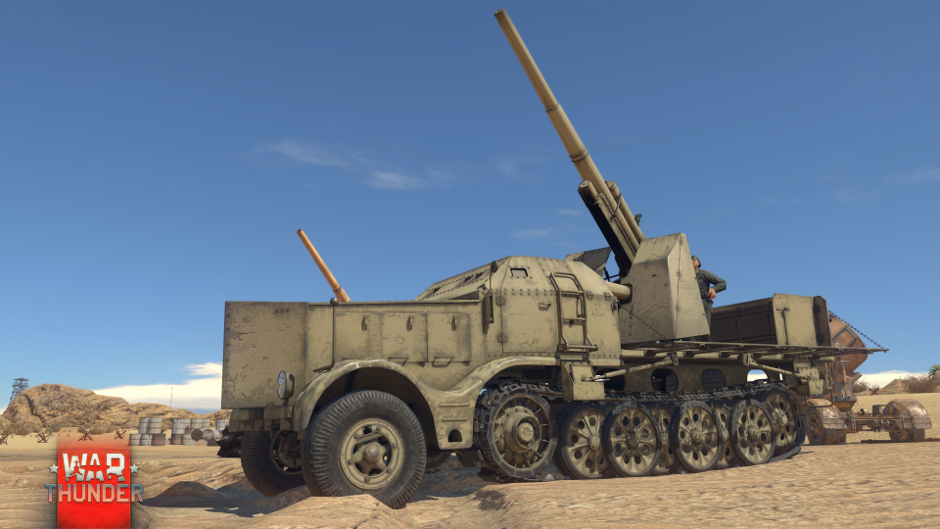 A combination of heavy half-track and 88 mm Flak cannon? Does that sound odd?

The Sd.Kfz.9 was the heaviest German half-tracked vehicle operated during the Second World War. Designed initially as heavy tractor for heavy artillery and as a recovery vehicle capable of towing tanks from critical situations. The first prototype was conceived in 1936.

The vehicle was primarily designed to be an engineering machine, however it was during the Second World War that the Sd.Kfz. 9 was employed as a platform for artillery. The vehicle became a mobile Anti-Aircraft Artillery and Tank Destroyer capable of mounting several configurations of weaponry. The most dangerous of which, was that version that mounted the infamous 88mm Flak Cannon.

In War Thunder players will be able to operate the 8.8cm Flak 37 (Sf.) auf s. Zgkw. 18 ton tractor mounted with an 88 mm Flak 37 cannon. This version is considered the “bigger brother” of the already available Sd.Kfz. 6/2 with the 37 mm cannon. It will soon become apparent however from the first glance, which of them are better prepared for battle.

Equipped with a stronger engine, a more powerful cannon and light armour means that every enemy tanker will think twice before they decide to engage you.  The 88mm cannon is capable of penetrating the armour of most ground vehicles and a well aimed shot can eliminate many of them with a single shell.

Drivers of the 8.8cm Flak 37 (Sf.) auf s. Zgkw. 18t however need to be aware that it is not heavy armoured machine but a lightly armoured half-track which has the potential to withstand attacks from light machine guns or shrapnel from bombs, but will most likely not survive a direct hit from any large caliber cannons. The best tactic to use with this vehicle be to provide support for friendly ground vehicles from the 2nd line. Especially considering the precise and deadly nature of the 88mm Flak 37.

8.8cm Flak 37 (Sf.) auf s. Zgkw. 18t is a combination of a well know half-track chassis with the iconic 88mm cannon that will be a great addition to regular German Tech Tree in War Thunder!

Commenting is no longer available for this news
Rules
Zenith
17

Yeah... at this point, can we stop pretending that "AA" vehicles are going to be used against aircraft.

it's not AA vehicle. it's a TD and will be in the open-topped TD line, rank 2

Senio, so stoped pretending AA and admited TD, it's a step forward

It will be used in the game exactly the same way it was used in WWII, A tank killing SPAA

Lady_Flandre, where's your historical data that says how they were used?

I hope so, because that'd just look awesome. And well, an 88mm is almost useless as AAA without XD

Universae, it is NOT an AAA

will it get Burst shells (the AA kind) which are set for a certain distance?

I think it's fine for it to be A TD due to the cannon, but if it was supposed to be an AA, why not give it air burst shells?

HMSD33Dauntless, like it was said, they were primarily used (and will be even more so in-game) as TD not as AA

they were used as TDs mostly

Senio, Of the 8.8cm Flak 37 (Sf.) auf s. Zgkw. 18t, a total of 15 units were produced. 3 of these were not suitable. The remaining 12 were all assigned to the Heeres-Flakartillerie-Abteilung 304. which was incorporated in the 26. Panzer Division and fought in itally. I cannot find even the smallest mention of what H-Fa Abt. 304 actually did whilst in italy. But being a Flak-unit, their primary duty would be Anti-air, thus I very much doubt that these vehicles 'were mostly used as TDs'.

If its not an SPAA gun, then why are the barrels always pointing to the sky in all the pictures? Thats kinda lame

So... premium or regular?

Thulle_, can u let the new spaa mark the enemy plane distence? for example the M163 , it can see how far the enemy plane in his vision , cuz as a cold war vehicle , they must show something different between the WAR 2 spaa!

Are you able to tell us what tier this is going to be? and if so, What class of tank is, a tank destroyer?

Senio, this is AMAZING thank you :))

Senio, best news ever! Tomorrow is pay day for me...so can you release the update this weekend :) ?

This looks SOOOO OP! Premium or Regular. (hope it is regular)

it won't be OP

Are there some interesting British vehicles to show of?

There indeed are...or rather - will be.

all the german bias in this patch

german bias? where? are you alright?

How can people resist the Germans after this?

Not to mention that gigantic flying boat.

Roloz, So true I've been resisting for a long time but now I want suddenly want to play german