P-47D-25 - The All American Juggernaut
9 February 2016 Profile
Attention! This news was published on the old version of the website. There may be some problems with news display in specific browser versions. 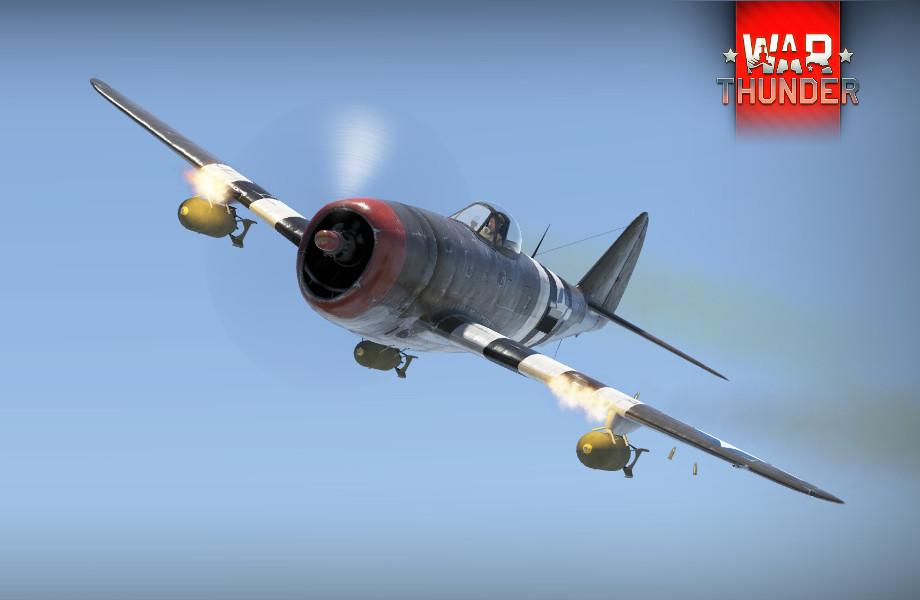 The Republic P-47D-25 Thunderbolt is a US Strike Fighter that is affectionately known by many as simply the “Jug”. This was mainly due to the aircraft's exceptional durability, reliability and almost legendary ability to take extreme punishment and still bring its pilots home safe. Within War Thunder, the P-47D-25 is situated within Rank III of the American Aviation line and is located with its fellow D model Thunderbolt, the P-47D-28.

The P-47 Thunderbolt found its origins in the Seversky P-35 and Republic P-43 Lancer, both of which had exceptionally short lived production runs and operational history due to complications and underwhelming performance. Nonetheless both were significant in contributing to the somewhat fledgling years of the United States Army Air Force and had several novel new design features such as retractable undercarriage, fully enclosed cockpits and mounted the Pratt & Whitney R-1830 Twin Wasp radial engine. Lessons learned in both aircraft found its way to the development of the XP-47 project by 1940, which was backed by the USAAF. The result would be one of the largest and most powerful single engined piston fighters in aviation history. Whilst the initial production P-47B models had some teething issues, these were relatively minor by comparison to the impressive performance and firepower of the aircraft. The design was refined through the C series, which would be the first to see combat in the European theatre.

Ultimately this would lead to the most produced P-47 model, the D series The P-47D model mounts the impressive Turbo Supercharged R-2800 Pratt & Whitney Double Wasp radial engine that is also found on the F6F and F4U and utilizes its exceptional power with an extremely large propellor. The P-47D block model 25 was the first model of the Thunderbolt to employ the “Bubble” or Teardrop style canopy rather than the previous “Razorback” style found on the B and C series. This gives excellent all round clarity to the pilot in combat, something that is key to success particularly to Simulator Battle pilots. The cockpit also has decent armour protection for increased pilot survivability.

The epitome of American air power, the P-47D-25 has a substantial array of offensive weapon options and capabilities available to War Thunder Pilots. As standard, the aircraft comes equipped with 8 x 12.7mm M2 Browning machine guns with 4 mounted in each wing and a total ammunition capacity of 3400 rounds. This devastating configuration delivers an exceptionally effective “punch” both in Air-to-Air engagements and in the Ground Attack role rivaling many cannon armed aircraft. Thanks to the FMBC Mk I, FRC Mk I and FLBC Mk I Weaponry upgrades, the P-47 can also carry an impressive array of external ordinance. Underwing strong points and centerline racks allow the P-47D-25 to mount both 500lb and 1000lb bombs, as well as 10 x 127mm HVAR rockets or even a combination of all 3. This gives pilots the significant advantage of having an extremely versatile aircraft that can adapt to developments and situations within combat and fulfill a multitude of roles in battle.

Particularly in Combined Arms battles, the P-47D-25 is an excellent choice to any American Lineup as it is equally as dangerous to Ground Vehicles as it is to Aircraft. For its size the P-47 has a solid rate of climb and can achieve very good top speeds. What's important to note is turning engagements and dogfighting is not something the P-47 should be involved in. The P-47s good speed and climb rate in combination with its heavy weight make it excellent for the energy fighting “boom and zoom” style of play. The P-47D-25 can quite easily keep pace and outmatch many of the Fighter aircraft within its rank with correct energy management and conservation.  Being an extremely heavy aircraft, it's critical to not “bleed off” speed in unnecessary situations as it is all too easy to do so.

In operational combat, the P-47D carried out a variety of roles, ranging from Strike Fighter, Interception, Interdiction, Bomber Escort, Ground Attack and Air Superiority, the aircraft really was the “jack of all trades”. Particularly in the European theater, the Thunderbolt was key to the allies Western Advance across Europe from 1944 onwards, with many USAAF units stationed in Britain advancing across the continent as progress was made. The use of drop tanks meant that P-47s had fantastic endurance in the skies, be that by escorting bombers to and from their targets or during fighter sweeps. As the war progressed, the P-51 undertook many of the pure fighter and escort roles the P-47 had previously occupied, but the Thunderbolt remained one of the most successful ground attack fighter-bombers of the war.

Loved as much in War Thunder as it was in real life, the P-47D-25 appeals to many pilots of all skill levels and can cater to a variety of playstyles, something not many aircraft can accomplish so well. The “Jug”  is a true American classic that can be extremely effective regardless of its role in battle. Many can be seen around the world today still, weather that be in Museums, at air shows or in the virtual skies of War Thunder.

What are your experiences with the P-47? Be sure to tell us in the comments!