Polikarpov U-2/Po-2
12 October 2014 Ugly Ducklings
Attention! This news was published on the old version of the website. There may be some problems with news display in specific browser versions. 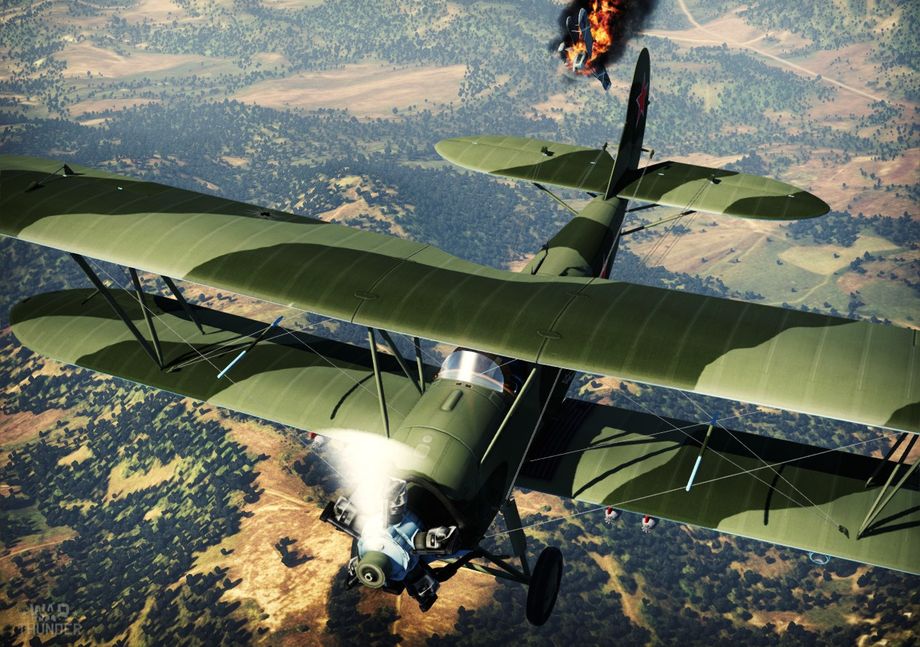 Even a cursory search through the War Thunder forums and status updates will identify a small number of aircraft which are highlighted for being amongst the most ineffectual in the game. One of the most commonly mentioned is the Polikarpov Po-2, a low Battle Rating Soviet biplane with a very limited bomb load. Whilst a comparison can be drawn with the Kingfisher of this series’ previous article in terms of overt ineffectiveness in the air-to-air or ground attack role, the same qualities of this little biplane are also true: there are some aspects of real life combat which cannot be modeled in a computer game, and the Red Army Air Force was able to exploit some of these with the Po-2 during the Great Patriotic War.

The origins of the Polikarpov U-2 date back to 1927 when the prototype, the U-2TPK, saw its first flight. The idea behind the U-2TPK was practical and forward thinking: a biplane trainer designed for economy and ease of repair by building the wings out of four identical sections which could be interchanged if damaged or worn. Likewise, the rudder, elevators and ailerons were all the same. Whilst this concept was wonderful for maintainers, it was a nightmare for pilots: the U-2TPK was not an easy or forgiving aircraft to fly, and did not perform well.

The next prototype was more much conventional in its aim: performance and control response were now a priority, and with a new wing design and undercarriage, this next prototype took to the skies in January 1928. The design was a success and production was well underway by the end of the year.

So, what made the aircraft so useful? An ideal combination of stability and forgiving handling characteristics with some degree of agility. This made the Polikarpov U-2 an ideal basic trainer. The basic trainer is unlike any other aircraft a pilot will ever fly: the first time he or she straps into the seat will be their first attempt at actually flying; that aircraft will plant the foundations for an entire career and that cockpit will be the sight of often the most memorable five minutes of any pilot’s career: the first solo.

Core skills such as climbing, descending and turning, speed and power changes, take off and landing, stall and spin recovery and basic navigation were all taught to generations of pilots on the U-2 and, as it was later renamed after the death of designer Nikolai Polikarpov, the Po-2. Pre-war Soviet pioneers, Il-2 pilots, the world’s first female fighter pilots and even flyers of the legendary MiG-15 all learned the basics of their trade in the Po-2, or something very similar. Without these basic trainers, there was no aviation as there was no way of training pilots before moving onto more complex and demanding aircraft types. In this role, the Po-2 achieved its greatest feat.

However, even before the German invasion of the Soviet Union in 1941, the popular little biplane found itself modified and altered to fit a variety of roles which were never even considered when the first pencil lines were drawn on the planning board during the design process. A bulged canopy rear cockpit was a simple modification into a light passenger transporter; this was taken a step further in 1934 by replacing the rear cockpit with a windowed, enclosed cubicle for a stretcher bound patient and a medic. Further modifications of the rear cockpit saw a twin and then four man passenger compartment, a radio fitted for direct communications with artillery units to correct fall of shot; even a modified front cockpit was produced in 1935 to experiment with prone position pilot flying. Floats were fitted for seaplane versions of the Po-2, geographical survey variants rolled off the production lines; the RV-23 variant even saw a replacement of the standard 100 horse power M-11 radial engine with a 710 horse power Wright Cyclone. Another military use of the Po-2 was to add a loudspeaker to the aircraft and fly over enemy positions, transmitting messages to opposing troops as a form of psychological warfare.

But, following the commencement of the Great Patriotic War, perhaps the most famous use of the U-2/Po-2 was in direct combat as a ground attack aircraft. The versatile biplane was fitted with a single 7.62 mm ShKAS machine gun on a flexible mount in the rear cockpit, as well as up to 120 kg of bombs or rails for four RS-82 rockets. The ensuing U-2LM ‘Light Sturmovik’ variant acquired the nickname the ‘kukuruznik’ or ‘corn-cutter’ from Soviet ground forces due to its daring low level attacks. This capability was increased in the U-2LNB variant; now, up to 200 kg of bombs could be carried, as well as flares, a searchlight and an engine silencer fitted to the exhaust for night operations.

It was in this role that the U-2 saw media fame in the hands of the all female 588th Night Bomber Regiment. The crews of the 588th would carry out a succession of short ranged bombing attacks against German forces over the course of an entire night. The effect was not in mass destruction of assets or a huge casualty toll, but came twofold: the psychological effect and sleep deprivation. Hour after hour, night after night, with some accounts describing crews flying up to 18 raids in a single night, the 588th and other units would harass and attack German forces.

Crews would switch their engines to idle and glide down through the night, the only warning of their impending attack being the errie howl of wind through the biplane’s struts and bracing wires only seconds before bombs were dropped. Terrified by the threat of the bombs, not permitted to sleep due to the frequency of attacks, German soldiers referred to the women of the 588th as the ‘nachthexen’ or ‘night witches’.

A number of common myths later came about from their exploits: the Po-2 was issued as the 588th were ‘only’ women and better aircraft were reserved for men. In actual fact, many male squadrons flew the Po-2 just as effectively, and Marina Raskova’s other female squadrons were given top of the line Yak-1 fighters and Pe-2 bombers. The Po-2 was no last resort aircraft, it was actually highly regarded.

In War Thunder, it is easy to dismiss the Po-2 as nothing more than cannon fodder; an easy target which can only achieve success if it is isolated over light enemy ground forces without an attacking fighter in sight. However, take a moment to put this in real life terms: at night, without the aid of radar, a computer generated red bracket around a target, a range finder or an Arcade Mode aiming point to concentrate on, all of a sudden it becomes much more difficult. The fighter pilot is trying to find a lone, tiny biplane flying at tree top height in the pitch-black skies. Then, even if it is located, this biplane’s top speed is similar to the stalling speed of any modern, attacking fighter, making it highly dangerous to attempt anything more than a single firing run. Add to this the fact that the Po-2 is considerably more maneuverable than any Bf109 of FW190 at low speeds and this agile, near impossible to detect low flying raider is all of a sudden a real problem, especially when trying to make a low speed firing run at low level in the dark, near stalling point, with a target equipped with a sting in the rear cockpit…