The M728 is a combat engineering vehicle, developed on the basis of the American M60A1 tank by the Chrysler company during the early 1960s. Fans of peculiar American ground vehicles and oversized weapon calibers alike may look forward to the M728 soon making its way to War Thunder as part of the next major update!

Briefly: A heavily modified M60A1 capable of simultaneously reshaping both the landscape as well as hulls of enemy tanks thanks to its high-caliber demolition gun!

After the M60 entered production, American engineers almost immediately began working on a modified version of the vehicle, intended to be used as a combat engineering vehicle. Works on the project officially began in October 1961, with engineers taking the improved M60A1 as the chassis and outfitting it specialized equipment, such as a turret boom and winch, a dozer blade and also a 165 mm demolition gun, which itself was a modified version of the British L9A1 cannon.

In October 1963, a handful of vehicles were taken off the assembly line and converted into the engineering variant for testing. The latter began in March 1964 and successfully concluded in July of the same year. At the same time, the vehicle was approved for production and later on given the official designation M728. Once serial production started, the first units of the M728 quickly found themselves supporting troops in the field during the ongoing Vietnam War. There, the M728 was used to primarily destroy enemy fortifications and overcome barriers as well as assisting in engineering work in the field.

However, the M728 continued its service long past the Vietnam War. In fact, the vehicle actively participated in the Gulf War during the 1990s. However, with the turn of the century, the U.S. Army realized that the M728 was no longer capable of keeping up with more mobile combat units and that its operating costs were becoming unjustifiably high. As a result, the M728 was placed in reserve and since 2018, was also being gradually phased out. 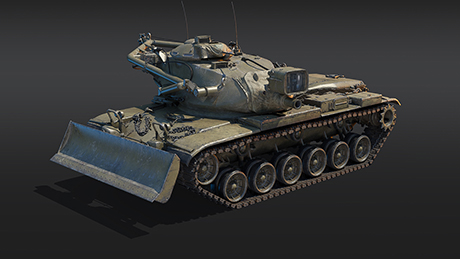 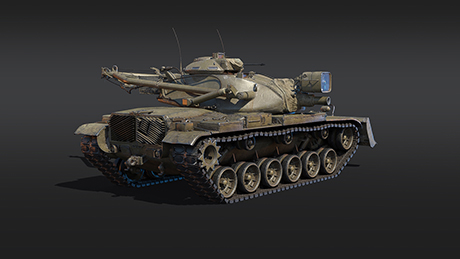 In War Thunder, the M728 will be a very special new vehicle making its way to the higher ranks of the American ground forces tree as part of the next major update Apex Predators. Namely, the M728 will be the first American ground vehicle to feature a 165 mm cannon, thus giving seasoned tankers access to one of the largest caliber weapons available to ground forces along with all the destructive power that comes with it. However, that’s just the tip of the iceberg on what the M728 has to offer. Keen to find out more? Then let’s take a closer look at this steel beast!

One of the first things that will strike tankers looking at the M728 for the first time is undoubtedly its gun. Although appearing somewhat modest in comparison to the vehicle’s overall size, the 165 mm M135 cannon certainly doesn’t underdeliver in terms of its destructive potential. Although a novel weapon for American tankers, the M135 cannon is actually a friendly face in disguise. Namely, the cannon represents a modified version of the British L9A1 cannon, found on the Centurion AVRE, already familiar to experienced British tankers. As a result, both weapons share near identical properties and, more importantly, destructive power once tankers become confident with the cannon’s tricky ballistics.

Apart from the substantial upgrade in firepower, the M728 has a lot in common with the standard M60A1 that tankers recognize as being one of the earliest American ground units found at Rank VI. As a result, players familiar with the M60 family of vehicles will know what to expect from the M728: it inherits the family’s good balance between mobility and protection, meaning that the M728 can stand its own in a firefight and also keep up advancing allies without fearing of being left behind. Thanks to its role as an engineering vehicle however, the M728 brings with it a handy gadget: a dozer blade. With it, tankers can quickly fortify their position by digging and thus shielding particularly vulnerable parts of the hull against incoming enemy fire.

Lastly, the M728 is also a premium vehicle meaning that tankers will earn more rewards for each action performed in combat - a particularly useful perk for players aspiring to climb to the top ranks of the American ground forces tree!

Will it have some additional towing range or perks? Maybe faster repairs?

That's what I thought right now. Gaijin should make engineering vehicles the "team healer" with improved repair help and towing. Come on, Snail. This is a great idea.

Forget the F-16, this here is what I'm excited about!

An average barrel in my opinion.

Please make the crane usable to help teammates which are stuck.

Does the A frame work? Sad its a premium. My son will love driving it around tearing up the test map..