The Panavia Tornado is arriving soon as the new rank VIII strike aircraft in three gaming nations with the next major War Thunder update!

In 1968, several countries including West Germany, Canada, Belgium, Netherlands and Italy formed a working group to explore possible options of replacing the F-104 Starfighter that all nations had in service at the time. Since it became very clear right from the onset that different nations had different requirements and needs for a successor aircraft, the decision was quickly made to develop a single multirole aircraft type. Later that year, the UK also joined the working group as the country itself was looking for replacements for older types.

After Canada and Belgium left the working group, the remaining nations proceeded to form an international consortium - the Panavia Aircraft GmbH - which would develop and manufacture the new aircraft. In 1970 however, the Netherlands also abandoned the project as the design was deemed to not fit the requirements of the RNLAF. Despite this, Panavia Aircraft GmbH was formed from parts of the British Aircraft Corporation, Messerschmitt-Bölkow-Blohm and Aeritalia with the workload split evenly between the nations and their respective companies.

At the start of the development work, both a single seat and twin seat option were considered. In the end, the twin seater version prevailed once the design was finalized in 1972 and later on became the Panavia Tornado. By August 1974, the first Tornado prototype took to the skies. Production of the Tornado followed in 1976 and continued until 1998 where 990 units of the Tornado were produced across all variants.

During its service as part of the RAF, the Luftwaffe and the Aeronautica Militare, the Tornado took part in numerous combat operations in Iraq, Bosnia, Kosovo, Libya as well as in smaller conflicts in the Middle East such as in Yemen, Afghanistan and Syria. Apart from the original national operators, the Tornado was also procured by Saudi Arabia as its only foreign operator who commissioned 96 Tornadoes of different variants into service. Excluding the RAF, which retired its contingent of aircraft in 2019, the Tornado still remains in service with its remaining operators to this date - over 40 years after its initial introduction - thus truly withstanding the test of time. 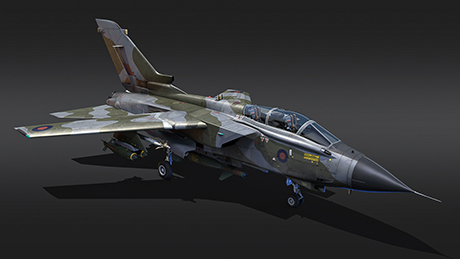 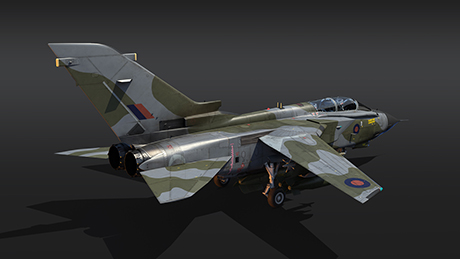 In War Thunder, the Tornado IDS (or GR.1 in service with the RAF) will be the new top strike aircraft awaiting veteran pilots at rank VIII of the British, German and Italian aviation trees following the release of the next major update, Apex Predators. Featuring variable geometry wings and supersonic capabilities, the Tornado might be a strike aircraft by designation but thanks to its incredible versatility, it can certainly get a lot more done than that! Let’s get to know the famous ‘Tonka’ a bit better, shall we?

The Tornado IDS joins the club of aircraft in War Thunder outfitted with variable geometry wings, also called ‘swing winged’ aircraft. Like other aircraft outfitted with this feature, the Tornado can boast its optimal aerodynamics both during subsonic and supersonic flight, thus ensuring excellent handling characteristics at all speeds. Furthermore, the Tornado can easily achieve supersonic flight thanks to its two purpose-built Turbo-Union turbofan engines. As a result, the aircraft can achieve a top speed of around 1,400 km/h at ground level while at higher altitudes the Tornado can accelerate even over 2,300 km/h (Mach 2.2). Thanks to such impressive flight characteristics, the Tornado can quickly get in and out of trouble and also escape pursuing aircraft.

Speaking of combat scenarios, we mentioned earlier that the Tornado is an extremely versatile aircraft, but how exactly? Apart from its excellent flight characteristics that bring it on par with some interceptors and fighters, it's also due to its lethal weapons arsenal. Upon obtaining the aircraft, pilots will have access to a pair of 27mm cannons with 180 rounds of ammunition available per gun. Now while these guns are certainly useful for strafing ground targets and blasting enemy pilots out of the sky during intense dogfights, they alone don’t define the Tornado’s arsenal.

What does however, make the Tornado’s armament stand out is its selection of suspended ordnance options. These range from later models of the AIM-9L Sidewinder air-to-air missile over laser-guided bombs to more conventional freefall bombs of various calibres. Such a diverse arsenal allows the Tornado to not only inflict great damage to hostile ground troops but it can almost immediately switch to combat air patrol duties and provide air cover for its allies once the strike weapons have been expended.

The various modifications of the Tornado IDS will be making their way to the top rank of the British, German and Italian aviation trees with the arrival of the next major War Thunder update, Apex Predators. In the meantime, make sure to keep scanning the horizon for more news as we continue unveiling what else the upcoming update has in store for our players. Until then, clear skies and happy hunting pilots!

man, Italy had over 40.000 flying hours in the F-16A, a really competent country to get the F-16. but instead you guys opted to give a TT that's desperate for a good top tier plane, a plane that's 100% Dead on Arrival. disappointing.

The Tornado happened to be the first aircraft finished for Italy. A new top fighter for Italy is something very much within our plans and being worked on. The same also goes for Germany and the UK too.

Jet is dead on arrival. It has worse ground attack than the F15, isn't exactly fast and has worse suspended weapons than the harrier. Perhaps gaijin should have added the F3 or the GR4 but no... can't have Britain get a decent top tier now can we... It does essentially nothing well and is the javelin of the new age... Do people even remember that, when gaijin tried to hype up the Javelin in the same patch they were introducing the Mig19 and the F100, this is exactly the same situation again.

The ADV variant is already in development. The GR.4s primary differences over the GR.1 include weaponry far above what we have currently in game. GR.4 was a mid-life upgrade program after the GR.1.

Don't get me wrong, the Tornado is a nice aircraft. But why add the IDS in an update that adds F-16s and the MiG-29? Why not the ADV? The IDS would've helped the CAS gap if it was added a year or so ago, but as is now the Harrier GR.7 already fills that role better than the IDS would. I'm not complaining that we're getting it, but i just want to kinda know why it's now of all times?

We dont just add fighters to the game. But also new trike aircraft. The GR.1 and IDS family were the first series of Tornado, much like how we started with the MiG-21F-13 when that family of aircraft was first introduced. The ADV variant is very much within our plans to come.

Thank you Smin for answering peoples questions. It is noticed and appreciated.

It's a good addition for sure, I'm just concerned that it's not the air defense variant. Meaning that f-16s and mig-29 are going to demolish them in air RB

The ADV is in development. Just it wont be within this patch. This aircraft conducts different roles to what the F-16 / MiG-29 and ADV will.

Its in our plans o7

Of the new planes coming this is the one I'm looking forward to the most. I've wanted a Tornado in the game for ages and I'm glad we're finally getting it.

Its been some time coming and a lot of work and effort has gone into it. Very much also looking forward to taking it up!

now just give us the later Buccaneers and we'll be golden

Looking forward to the A 200

That was the F3 ADV in italian service right?

Finally! Long awaited CAS option for Italian top tier. Time to clean dust off of my line up