The Sea Harrier is a later modification of the British V/STOL Harrier jet fighter that entered service with the Royal Navy in the late 1960s. Soon, the Sea Harrier FRS.1 will come to War Thunder as a new squadron vehicle, available with the release of the “Apex Predators” major update.

Briefly: A modified version of the Harrier jet fighter, adapted for naval operations and featuring a bolstered weapons arsenal.

Immediately as the Harrier GR.1 entered into service, Hawker Siddeley began development of a naval variant in 1969. Although the work was approved by the Ministry of Defence, no orders were placed at the time. This changed in May 1975 when 25 aircraft were ordered from Hawker Siddeley to equip the new carriers of the Invincible class. In parallel to the order, the new aircraft received its official designation ‘Sea Harrier’.

Entering service in 1979, the Sea Harrier was initially extensively tested before being released into active duty as part of 800 Naval Air Squadron aboard HMS Invincible. After entering service, the Sea Harrier’s most prominent operational use was marked by its involvement in the Falklands War of 1982. During the conflict against Argentine forces, the Sea Harrier was credited with shooting down 20 aircraft while suffering no losses in return during the aerial engagements. However, two Sea Harriers were lost to ground fire.

In 2006, the decision was made to retire the Sea Harriers from active service, thus marking the end of the aircraft’s not less than 27-year service career. Apart from the Royal Navy, the Indian Navy was the only other operator of the Sea Harrier, with 30 aircraft serving in its fleet until retiring in 2016. 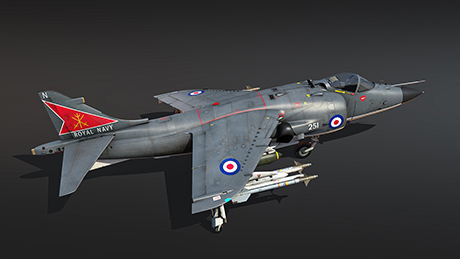 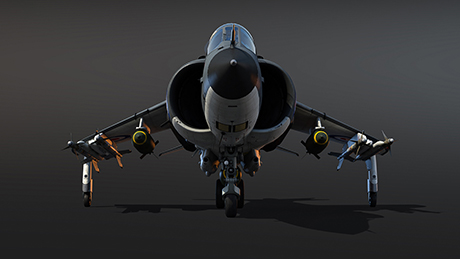 In War Thunder, the Sea Harrier FRS.1 will be a new squadron vehicle awaiting seasoned British pilots in the next major update. Expanding the family of the exotic and highly popular Harrier family of V/TOL aircraft in the game, the Sea Harrier builds upon the capabilities of the familiar Harrier GR.3 and introduces a much more potent arsenal, optimized for air-to-air engagements.

Since one of the key roles of the Sea Harrier FRS.1 is to defend the fleet from aerial threats, its air-to-air weapons arsenal received a notable improvement. Namely, engineers made it possible to outfit the Sea Harrier with the highly potent AIM-9L Sidewinder missiles - one of the best air-to-air missiles available in the game. The Sea Harrier has the unique twin pylons for these missiles, so you’ll be able to carry up to 4 of AIM-9L at once.

Furthermore, the Sea Harrier can also be equipped with a large number of unguided rockets as well as one additional 1,000 lb bomb compared to the land-based Harrier GR.1 - a neat upgrade that will certainly come in handy as it improves the Sea Harrier’s ability to strike ground targets. Apart from the improved weapon selection, the Sea Harrier at its core remains neigh identical to the GR.3 already familiar to some seasoned British pilots. As a result, the Sea Harrier inherits the excellent flight characteristics and of course, the signature V/TOL capabilities, for which its aircraft family is so known for.

So stoked to see this finally being added. Being in the Fleet Air Arm myself makes it extra special. Defo making skins for this one

Lots of potential on that front!

Probably in the kettle m8?

This is great. I wonder. Any chance we can get a good squad vehicle for France? I have other major trees and finally want to grind France but the Mirage is proving pretty boring, and the F1C sounds like it won't be much better. I'd gladly pay for a good French premium or Squad vehicle though. Thanks for all your hard work on these updates! The game's been years of fun for me and appreciate the work that goes into it.

We are always looking to expand squadron vehicles wherever possible. So stay tuned for the future!

The Empire Strikes Back!