The SUB-I-II is one of four prototypes of what would eventually become the Type 73 APC in service with the JSDF from 1973. Coming to War Thunder as part of the next major update, Japanese tankers may look forward to the arrival of a specific version of this prototype, featuring a 20mm turret that didn’t make it into the production variant!

Briefly: A prototype version of the Japanese Type 73 APC, outfitted with an experimental 20 mm roof-mounted turret.

Based on the influence of the Vietnam War as well as on the experiences from using the American M113 APC, the Japanese military concluded several drawbacks on their Type 60 APC. Namely, it was deemed that the vehicle had slightly poor mobility, lacked amphibious capabilities and had no NBC protection systems in place. As a result, in 1964 various Japanese companies, including Mitsubishi, began work on addressing some of these drawbacks by conducting tests with experimental platforms. By 1967, the Defense Agency laid out the requirements for a new APC design and contacted several companies to produce different parts of the vehicle.

Furthermore, four prototype versions were ordered for testing from Mitsubishi and Komatsu. Both companies had to produce a version with steel armor plating as well as one made from aluminum. While Mitsubishi’s aluminum-based prototype would in the end be selected as the most suitable design and would thus form the basis for the subsequent production version of the Type 73 APC, it was also selected to conduct different tests.

Namely, during testing, the SUB-I-II prototype, as it was known, also had a Rheinmetall 20mm turret mounted on its roof to test the feasibility of evolving the Type 73 from a pure APC into an IFV design. However, due to various technical issues and an increased cost, it was decided not to pursue this design choice further. As a result, the Type 73 would end up remaining a pure APC design, without substantial armament fitted to it. 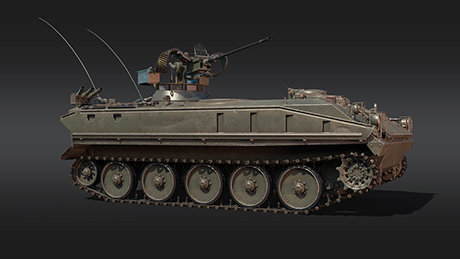 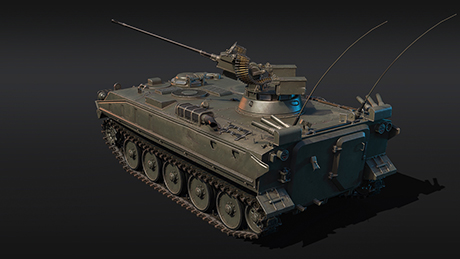 In War Thunder, the SUB-I-II will be a new SPAAG arriving in rank IV of the Japanese ground forces tree as part of the next major update. Being the experimental version of the same chassis of the Type 75 MLRS already familiar to some seasoned tankers in War Thunder, the SUB-I-II exchanged its access to a rocket launcher for a much more practical fast-firing 20mm autocannon. Sounds interesting enough? Then keep on reading for more details!

As previously mentioned, the SUB-I-II represents a prototype of the Type 73 APC, which in turn serves as a basis for the Type 75 MLRS. Therefore, it should come as no surprise to tank commanders that both vehicles share nearly identical characteristics in regards to mobility and protection for example. As a result, the SUB-I-II is fairly mobile and can conquer even harsher terrain due to its low weight but as this comes at the expense of rather light protection, this means that the vehicle isn’t particularly well-suited for close-quarter brawls and head-on engagements with the enemy.

On the other hand, what makes the SUB-I-II stand out from its close relatives is its Rh 202 20mm autocannon, mounted on top of the vehicle. Being a weapon familiar to many tankers from high rank battles, the cannon can be used both against light ground targets as well as aircraft to almost the same devastating effect. However, even with dedicated armor-piercing ammunition loaded, aspiring commanders of the SUB-I-II must still bear in mind that this is only a 20mm cannon, meaning that it may not be effective against more heavily armored opponents without turning the engagement into a point blank shootout.

In short, the SUB-I-II will not only expand the roster of available Japanese ground vehicles at its rank in general, but it will also give seasoned tank commanders access to a highly versatile combat vehicle, capable of assisting its allies by scouting out enemy positions and engaging suitable targets from the flanks while also capturing strategic points along the way and defending them from potential air attack.

The SUB-I-II will soon make an appearance in tanker’s hangars as it arrives in War Thunder as part of the next major update. In the meantime, be sure to stay tuned to the news to catch all the latest developments surrounding the upcoming update. Until then, happy hunting tankers!

YOOOOOOOOOO I WAS WAITING FOR THIS

R3 syndrome is spreading and iam loving it

This is a fact. The factualness of this fact cannot factually be overstated.

Nice to see SPAA for Japan :)