In the upcoming War Thunder update, our aircraft trees will climb to rank VIII! We are also introducing a rank VII Premium aircraft to boost research of the new top-tiers. Meet the A-6 Intruder, a highly sophisticated American all-weather attack aircraft, originally developed in the late 1950s based on the USN’s experiences in the Korean War.

Dear players! We are thrilled to announce a tier-up for War Thunder aviation! The upcoming major update will bring rank VIII to the game which will include 4th generation jets and aircraft of comparable combat efficiency. Also, almost every gaming nation will also receive a rank VII Premium aircraft to boost up the progress of any single plane in the national tech tree, including new top tiers. Today we reveal the first one, menacing A-6E Intruder wielding the heaviest payload in the game and the TRAM targeting pod which allows to use laser guided bombs! 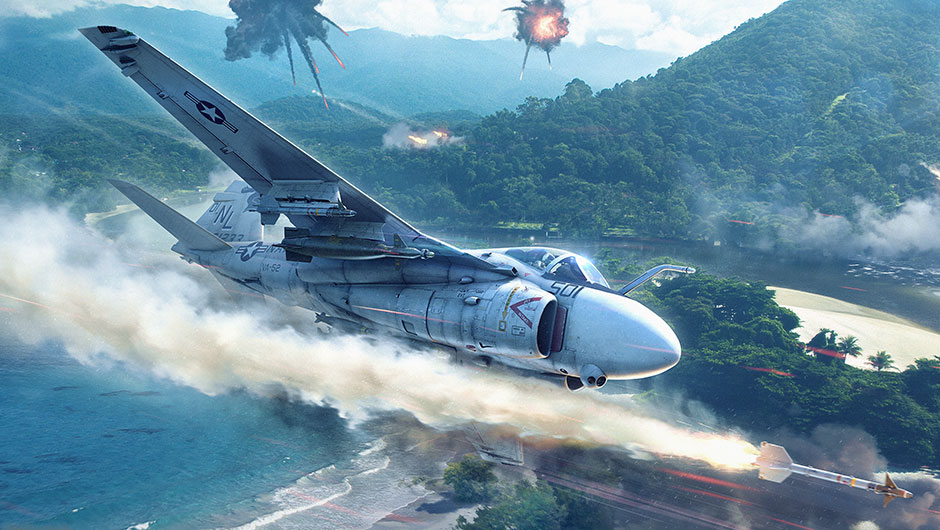 In the aftermath of the Korean War, the United States Navy concluded that its air support availability heavily depended on fair weather conditions as the primary strike aircraft at the time was the piston-powered A-1 Skyraider. As a result, the Navy issued a set of requirements for a new all-weather strike aircraft in 1955 to which eight aircraft manufacturers submitted a total of 11 design proposals by 1957. Among the submissions, Grumman’s proposal for a twin-engine turbojet aircraft was selected as the winner of the competition in 1958. The first prototype of the aircraft, designated YA2F-1, took to the skies in 1960 with the first production aircraft entering service in 1963 under the official designation A-6 Intruder.

Although the A-6 Intruder was among the most advanced aircraft at its time due to its sophisticated avionics, it was also subject to frequent upgrades. As a result, a multitude of variants were subsequently developed throughout its service life. Among the later variants was the A-6E TRAM, introduced in 1978. Apart from featuring improved electronics, it also incorporated the TRAM (Target Recognition Attack Multi-Sensor) pod under its nose, allowing the installation of more advanced suspended weaponry. Although only around 70 were built anew, most older A-6E airframes were converted to this standard.

In general, A-6 Intruders took part in many conflicts over their 30-year service career. Starting their service by taking part in the Vietnam War of the 1960s, the A-6 Intruders also took part in other conflicts during the 1970s and 80s as well as in the Gulf and Balkan Wars of the 1990s. Overall, close to 700 Intruders were produced before the aircraft was officially decommissioned from service in the late 1990s. 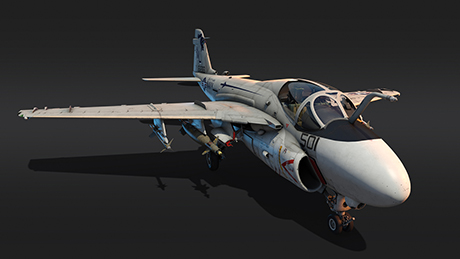 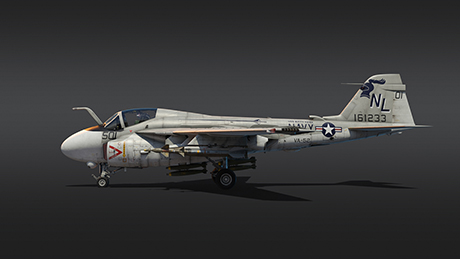 In War Thunder, the A-6E TRAM Intruder will be a new Premium naval strike aircraft joining the seventh rank of the American aviation tree with the release of the next major update. Due to its omission of fixed forward firing weapons - a highly unconventional trait for an American strike aircraft - the Intruder may at first appear like a toothless tiger but rest assured, this bird carries enough firepower to single handedly wipe out an entire tank platoon! We got your attention now, pilot? Then keep on reading to find out more.

Before we dive deep into explosive matters however, it’s worth taking a look at the A-6E itself of course. The Intruder is a relatively compact naval aircraft powered by a pair of Pratt & Whitney turbojet engines. The aircraft may not be able to break the sound barrier but it can still reach a more than respectable top speed of about 650 mph (~1,000 km/h), thus allowing it to quickly get in and out of the heat of battle.

As previously mentioned, the A-6E doesn’t feature any sort of fixed forward firing weapons, making the pilots’ dogfighting and strafing capabilities with the Intruder severely limited. However, this doesn’t mean that the Intruder is a sitting duck against hostile aircraft either as pilots can choose to include Sidewinder AIM-9L missiles , as well as 20mm gunpods in their loadouts to counter such aerial threats.

But going back to the subject of the Intruder’s ground attack capabilities - pilots will be able to choose between different types of suspended weaponry to mount onto the five hardpoints found on the A-6E. The A-6E can mount unguided FFAR and Zuni rockets as well as incendiary and conventional bombs of various calibers up to 2,000 lbs. Total loadout is truly outstanding: in the “bomb truck” setup the Intruder is capable to bring up to 28x500lbs or 13x1,000lbs bombs! However, pilots can also equip their warplane with more advanced precision munition such as GBU-10, GBU-12 or GBU-16 Paveway II laser guided bombs - up to five at once. Thanks to this vast assortment of weapon options, pilots can always ideally equip their aircraft for the task at hand.

The A-6E Intruder is soon arriving into War Thunder as the new Premium American strike aircraft with the release of the next major update. In the meantime, be sure to follow the news for the latest information regarding the upcoming update. Until then, clear skies and happy hunting pilots!

Even tho this aircraft is really cool, the price tag is way too high, 70 Euro for a single vehicle? That's just too much

It's rather steep indeed. I would wait for another birthday, Christmas, Black Friday, etc. event to buy it with 30-50% discount. 70€ is the price of a new generation, most expensive AAA title game. It's totally overpriced. I hope they could see how much they earnt during the Birthday event with the 50% discounts and realize that it's the future of the game. 30-40€ is the maximum someone would like to spend on an online vehicle.

Dont buy it then

I hope they add a tech tree variant like the a4 , there is a premium a4 , a squadron one and some in the tech tree so fingers corssed

So they can make money off a famous aircraft people have wanted for years, plus more money for gaijin means more money for future development(remember that, its not only a bad thing), also you say that like they wouldnt add a tech tree variant of the intruder aswell, which they definitely will

Soo... USA gets another top tier jet and other nations what do they get? What do the SAD ITALIAN trees get?

"The upcoming major update will bring rank VIII to the game which will include 4th generation jets and aircraft of comparable combat efficiency. Also, almost every gaming nation will also receive a rank VII Premium aircraft to boost up the progress of any single plane in the national tech tree, including new top tiers." If only one had the skill to read...

Can you atleast wait with being a REEEERER ? Its second devblog we got

Neither this, nor the A-10 or Su-25 should have all aspect missile at brs they are currently sitting at.

owh no... This does not look good at all.. Let it at least be balanced please and pls don't make top tier like 9.3

Oooh, this is not going to make high tier broken at all... We swear... Errm.