USS Frank Knox, a new Premium Gearing-class destroyer, arrives in the game in the upcoming “Fire and Ice” update!

The Gearing-class destroyers were a further development of the Fletcher-class ships, the most massively produced and successful class of American WWII destroyersI. In order to increase fire efficiency and improve air defense capabilities, the Allen M. Sumner class was developed with twin mounts of universal main guns, improved rudders and reinforced anti-aircraft artillery. When the construction of a new class of destroyers was in progress, it was decided to increase the length of the ship's hull by inserting an additional section in the central part, which significantly increased the fuel tank capacity, and also slightly improved the destroyer's speed performance.The improved Sumner class received its own class name - "Gearing". In total, 98 destroyers were built of the 158 ordered. One of them - the USS Frank Knox - was commissioned in 1944, she took part in the Battle of Okinawa, then the Korean War and in war in Vietnam. After decommissioning from service in 1971, the ship was transferred to the Hellenic Navy, where she received the new name Themistoklis. The destroyer was in service with the Greek Navy until the early 90s. In 2001, she became a target for torpedo fire from the Nireus submarine and sank. 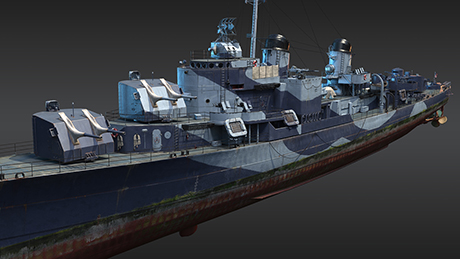 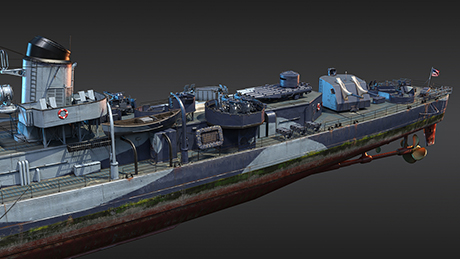 USS Frank Knox is a new representative of the Gearing-class destroyers which will appear in the game with the release of the “Fire and Ice” update. This ship has one of the richest service histories in the entire class - World War II, the Korean War, the Vietnam War, many exercises, maneuvers and combat duties. In the game, USS Frank Knox is recreated as she was built in 1944. This is a perfectly balanced destroyer with excellent protection and a large crew, which also has a Premium status that will allow you to quickly progress in the US bluewater fleet and get an increased reward in Silver Lions from battles. A few words about the advantages and disadvantages of USS Frank Knox are below.

Due to the addition of a new Premium rank III destroyer, the economic characteristics of the Premium USS Moffett are changing. The cost of this ship is increased from 1,300 to 1,750 GE, the research points multiplier is increased from 272% to 308%. The changes will take effect with the release of the “Fire and Ice” update.

The ship's main caliber is 127mm Mk.12 universal guns distributed among three twin-barreled turrets. The number of main battery turrets is less than on other American rank III destroyers, however, the guns still work perfectly not only against naval targets, but are also capable of destroying aircraft at long distances with the remote fuse shells. The low number of main caliber guns is compensated by rapid-firing 40 mm Bofors autocannons. 12 quick-firing 40mm barrels can easily shred any destroyer in close combat, not to mention lighter targets. The Bofors are assisted by 11 20-mm Oerlikons installed along the sides of the ship. Their fire is especially effective against aircraft at close range. As a destroyer, USS Frank Knox also carries 10 torpedoes in two five-barrel rotary launchers.

The survivability of USS Frank Knox is the hallmark of her class. Firstly, the ship has good armor for a destroyer - up to 19 mm armor plating on the sides, and up to 12 mm of the armored deck on top. This actually works well to protect the ship from the high-explosive shells fired by other destroyers and helps to save the crew. The crew, by the way, is one of the largest among all US destroyers - 336 members!

The vulnerable spot of USS Frank Knox is the gun magazines and elevators of the stern turret. The armor of the side plating ends just before ​​​​the third turret, and the ammo stowage is literally located between fuel tanks. Fuel tank fires often spread to the ammo stowage, followed by detonation. It is necessary to carefully monitor the fires in the stern of the ship and immediately send sailors to extinguish fires, since the crew size allows this to be done as often as required.

The new Premium destroyer USS Frank Knox will be waiting for you along with other new vehicles, location and improvements in the “Fire and Ice” update - stay tuned!

So if I'm reading this correctly, the Moffet is getting slightly buffed in terms of its ability to research things, while getting a raise in GE cost ... that's all? Nothing hidden, no other stat changes etc?

Always love to see US naval :-)

Ah, what a relief! When I read "economic changes to the USS Moffett", I was fearing a multiplier nerf... so I'm glad it's not the case! I think this change makes sense. Slightly higher repair cost proportional to a multiplier increase that makes sense with the introduction of the new ship; basically the new ship takes Moffett's place, and Moffett plays a higher BR role (so increased repair cost and rewards make sense). Glad to read these news!

it's not repair cost, it's price

so glad the moffet is nerfed! such a balance ship :) let's nerf all the other gamemodes and vehicles, that will be good