The TCM-20 is an Israeli SPAAG, developed on the basis of the M3 halftrack chassis commonly used by the IDF throughout the Cold War era. Coming to War Thunder as part of the next major update “Fire and Ice”, tankers may look forward to the arrival of the TCM-20 SPAAG to the starting rank of the Israeli ground forces tree!

Briefly: A late 1960s Israeli SPAAG based on the American M3 halftrack and outfitted with a twin 20 mm anti-aircraft turret.

During the 1960s, Israeli engineers took to modifying the American M45 anti-aircraft turret in service with the IDF at the time, in order to increase its effectiveness against fast modern aircraft. As a result, the engineers replaced the original quadruple 12.7 mm machine guns with a pair of HS.404 20 mm cannons salvaged from obsolete French jet fighters of the IAF. This new anti-air turret became known as the TCM-20 of which several hundred were converted from the original M45 design.

As the anti-air platform was just a towed turret, the IDF began to seek ways of increasing its mobility. The answer was to equip the turret to light armored vehicles in service with the IDF at the time. After some initial models were fitted to captured Soviet vehicles, a more permanent solution was found in equipping the widely used M3 halftrack with the TCM-20 turret.

After entering service with the IDF in 1969, TCM-20 immediately had its baptism by fire by taking part in the ongoing War of Attrition. The TCM-20 SPAAG also took part in the subsequent Yom Kippur War as well as in the Invasion of Lebanon in 1982. During the latter conflict, the vehicle also saw extensive use in the ground support role. Following the introduction of more advanced SPAAGs into IDF service, TCM-20 was slowly being phased out of IDF service before ultimately being retired in the early 1990s. 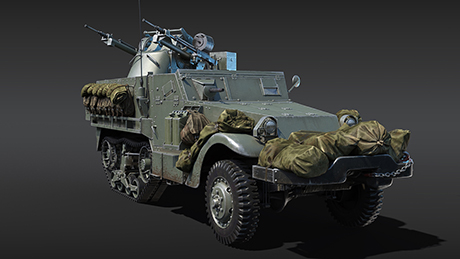 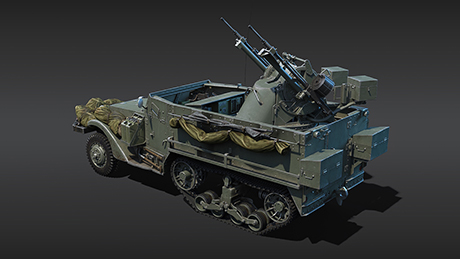 In War Thunder, the TCM-20 SPAAG will be a highly anticipated new addition arriving to the Israeli ground forces tree as part of the next major update “Fire and Ice”. Giving Israeli tankers access to a rather potent SPAA unit immediately at the nation’s starting rank will significantly broaden the capabilities of the initial Israeli vehicle roster and allow tankers to effectively shield themselves from air attack.

Being based on the well-known and widely used chassis of the M3 halftrack means that the TCM-20 SPAA will feel familiar to many seasoned War Thunder tankers, regardless whether they’re transitioning over from another nation or have already climbed through ranks of the Israeli tree. Highly regarded for its compact profile and great off road capabilities, the TCM-20 can achieve a top speed of 67 km/h and conquer even rougher terrain types thanks to its halftrack design.

However, the most notable difference that TCM-20 brings with it compared to existing M3s in War Thunder certainly lies in its armament. While the chassis is no stranger to all sorts of weapons being fitted to it, ranging from .50 cal machine guns to 75 mm anti-tank cannons and even guided missiles, the TCM-20 brings with it a novel twin 20mm cannon setup based on the familiar M45 turret American tankers recall from the M16 MGMC. As a result, the TCM-20 is able to effectively engage both advanced piston-engine aircraft as well early jet fighters thanks to both its responsive turret controls as well as punchy 20 mm cannons coupled with a high rate of fire. Furthermore, loading armor-piercing ammunition also makes the TCM-20 quite dangerous for hostile SPAAGs as well as other lightly armored vehicles. One thing is for sure - there’s no messing about with this one.

Furthermore, unlike the standard M3 chassis, the TCM-20 features improved protection. Although this still won’t make the TCM-20 impervious to enemy fire, it does improve its chances to withstand high caliber machine gun fire and shrapnel. On the other hand, the vehicle still has an exposed fighting compartment, making it vulnerable to strafing aircraft for example. So better keep those eyes scanning the skies for threats, commander!

The TCM-20 is making its way to the starting rank of the Israeli ground forces tree in War Thunder with the arrival of the upcoming update “Fire and Ice”. In the meantime, be sure to stay tuned to the news as we continue revealing what other exciting new features and additions await you in the next major update. Until then, happy hunting tankers!

Hry gaijin, "TCM-20" is the name of the domestic turret that is mounted on that Zachlam chassis. It would be more accurate to name the vehicle "Zachlam TCM-20". Calling the whole vehicle "TCM-20" is like calling the M16 MGMC "M45 Maxon".

There is a total of 8 SPAAs Israel can receive below BR 6.0, in general Israel can easily have a rank I (and it will be one of the best in the game, and full of domestic vehicles). IMO, we should had seen the Zachlam TCM Mk.3 instead of the Zachlam TCM-20 (TCM turret equipped with ZU-23s instead of HS.404s), but it is a good addition nontheless.

While the other popular nations (German, American, Russian, England) do not get a top category, Germany will not. At the moment it is doing quite well in the top tier. On dev servers, Finland hasn't gotten top tier yet, so let's be happy if it's in the tree when it launches

lol are you serious?

Meanwhile usa is still waiting for a twin or quad 20 AA.

Ok Gaijin why we don't have SPYDER already added to the game? would it take so much effort for you to add a weapon system that already exists in the game to a different faction?! what use does this truck have? Israel needs more serious SPAAs.

The SPYDER SR would break the game forever, it is WAY too overpowered. Python 5 and I-Derby are no joke. I dislike the CAS spam as much as the next guy, but the SPYDER SR can turn the 40km radius into a no-fly zone. A much better addition would be the HVSD/ADAMS which would be fairly balanced as Israel's toptier AA. Check out my HVSD/ADAMS suggestion: https://forum.warthunder.com/index.php?/topic/559708-hvsdadams-the-israeli-frankenstein-spaaland-ciws/&tab=comments#comment-9393241

the Penetration for this vehicle really isn't that great it's kind of lacking that BIG punch like other Spaa but it isn't any different than the rank 2 American M16 MGMC but at rank 4 instead so it's really not too promising. But on the other hand, Israel does need some Luv in the Spaa section but a lil more pen would be great to see.

Is this unlocked already like the m51? Or do we have to research it too? If research why is ut 6.0?