The BTR-ZD is a light Soviet self-propelled anti-aircraft unit, developed as a makeshift solution based on the design of the BTR-D airborne APC. Coming soon as part of the next major War Thunder update, Danger Zone, the BTR-ZD will join the battle and provide capable air defense for the mid rank units of the Soviet ground forces tree!

During the mid 1980s, Soviet airborne troops recognized a deficiency in their capability to defend themselves against enemy air attacks. As a result, they adopted the BTR-ZD - a further development of the BTR-D APC capable of carrying Strela and Igla MANPADS. However, the main anti-air weapon of Soviet airborne troops was still the towed ZU-23 anti-aircraft gun, which was favored by troops due to its versatility and relatively high effectiveness against low-flying aircraft, ground troops and lightly armored vehicles.

As a result, the airborne troops themselves came up with the idea to firmly attach the ZU-23 cannon on top of the BTR-ZD chassis, thus creating an SPAA field modification of the vehicle. Later on however, factory-made units with the ZU-23 cannon pre-installed on the chassis were also produced. These variants incorporated armored plating around the gun crew in order to increase their protection against shrapnel and rifle-caliber fire. 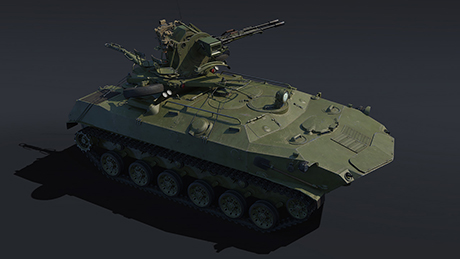 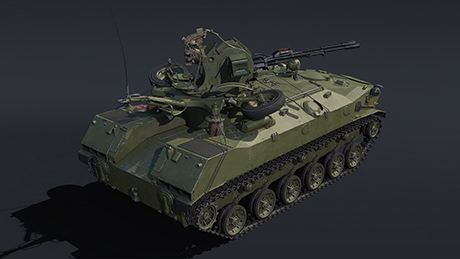 The BTR-ZD comes fitted with a single twin 23 mm ZU-23 anti-aircraft cannon. However, don’t be led astray by its classification as an AA gun as the ZU-23’s high versatility allows it to do much more work than that. Of course, the 23 mm cannons with their high rate of fire make short work of low flying aircraft up to engagement distances of around 2 km. But the cannons can do a lot more than that: thanks to armor-piercing ammunition, the BTR-ZD can effectively engage lightly protected targets and even pose a serious threat to more heavily armored units, if commanders manage to strike their foe in thinly protected areas.

Getting into advantageous firing positions, both for engaging enemy air targets as well as opponents on the ground, should prove to be no challenge for aspiring commanders of the BTR-ZD. That’s because on the one hand the BTR-ZD possesses a low weight of just 9 tons, and a 240 horsepower diesel engine on the other. As a result of this good power-to-weight ratio, the vehicle can reach a respectable top speed of around 60 km/h on paved roads and manages to traverse even more difficult terrain with relative ease. Furthermore, being an amphibious vehicle, the BTR-ZD can also cross deep bodies of water, thus expanding the tactical options for its commanders.

However, being based on the chassis of an APC means that the BTR-ZD doesn’t feature a comprehensive armor scheme. In fact, the vehicle is only fitted with thin aluminum armor plating, giving it enough protection to deflect rifle-caliber fire as well as shrapnel from nearby explosions. That being said, commanders should also bear in mind that the crew operating the anti-air turret on top of the vehicle is also relatively exposed to enemy fire, meaning that the BTR-ZD is everything but well-suited for spearheading an attack on the enemy lines.

The BTR-ZD is soon arriving to rank IV of the Soviet ground forces tree as part of the next major War Thunder update. In the meantime, be sure to stay tuned to the news as we continue revealing what other exciting new features and additions await you in the upcoming update. Until then, happy hunting tankers!