HMS Hood was the only Admiral-class battlecruiser constructed for the Royal Navy and arguably one of the most renowned British warships of all time. Soon, captains in War Thunder will have the chance to take command of this legendary warship as it arrives at the top rank of the British bluewater fleet as part of the next major update!

Briefly: A unique British interwar battlecruiser, respected for both its combat capabilities as well as elegant visual appearance.

The British Admiral-class battlecruisers date back to 1915, when an original battleship design with characteristics similar to Queen Elizabeth-class was converted into 30 knot battlecruisers. In 1916, the project was approved and orders were placed at the shipyards, but the Battle of Jutland, which showed the full omissions in the defense of the British battlecruisers, required new improvements to the project, which dragged on until August 1917.

Although four Admiral-class battlecruisers were ordered and laid down in shipyards, only one would be completed. The one ship of the class that would see completion would become HMS Hood, named after an 18th century British admiral. The ship was laid down in the John Brown & Company shipyard in Scotland in September 1916. Following its launching in 1918 and subsequent fitting-out, HMS Hood was commissioned into the ranks of the Royal Navy in May 1920, thus also becoming the largest warship in service at the time.

Upon entering service, HMS Hood took part in several showing-the-flag and training exercises in the interwar period. In November 1923 the ship set out to circumnavigate the globe, visiting ports in South Africa, India, Australia, New Zealand, Canada and the United States before returning to British waters in September 1924.

At the outbreak of WWII, the recently overhauled HMS Hood was operating in the area around Iceland, hunting for German vessels. After the Fall of France, HMS Hood took part in Operation Catapult - the destruction of the French fleet at Mers-el-Kébir in July 1940. However, HMS Hood’s most famous and final engagement would become that of the Battle of the Denmark Strait in which the warship, along with HMS Prince of Wales clashed with the German battleship Bismarck and the accompanying heavy cruiser Prinz Eugen. Suffering a lethal strike to one of its magazines shortly after the start of the engagement, HMS Hood blew up and sank within three minutes with catastrophic losses. Due to its popularity among the British at the time and its tragic loss during the vessel’s fateful last engagement, HMS Hood retains its legendary status and is to this day one of the most well-known British warships. 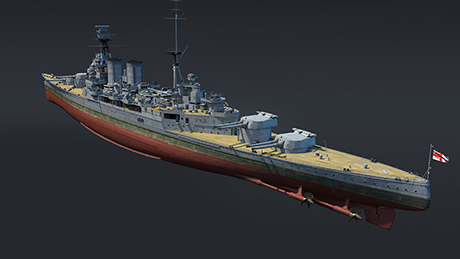 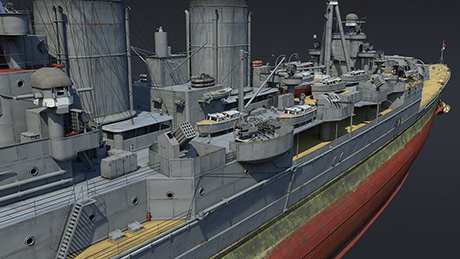 In War Thunder, HMS Hood will become the new crowning jewel awaiting captains at the top rank of the British bluewater fleet. Being the most advanced battlecruiser ever built for the Royal Navy, HMS Hood combines superior firepower with excellent mobility, making it one of the most potent warships available to British captains in the next major update!

Upon arriving to the game as part of the upcoming update, HMS Hood will bring with it the largest calibre primary battery found on any warship in the game currently. Fitted with a total of eight 15’’ (381mm) cannons split between four twin turrets, HMS Hood’s primary battery is capable of dealing devastating damage even to the most heavily armoured battleships sailing the seas in War Thunder at the moment. Furthermore, the ship’s secondary battery, consisting of seven twin 4’’ (102mm) dual-purpose cannons, complements the main guns by engaging enemy destroyers at closer range or incoming aerial threats at longer ranges.

Aside from the heavy guns, HMS Hood is also outfitted with three octuple 40mm ‘pom-pom’ cannons as well as four quadruple .50 cal machine gun turrets for use against smaller vessels and aircraft at shorter engagement ranges. HMS Hood has one final trick up its sleeve as far as firepower is concerned. Namely, captains will also have access to two fixed 21’’ (533mm) torpedo launchers fitted to both sides of the ship’s hull underneath the main deck. While their use in long-range gun fights with other capital ships may be questioned, they will undoubtedly come in handy during a close-quarter brawl.

Fun Fact: Due to its size and formidable armament, HMS Hood not only received the nickname ‘The Mighty Hood’ but it also came to symbolize the might of the British Empire.

As HMS Hood is designed as a battlecruiser, British shipbuilders certainly didn’t neglect the second factor that defines this warship type: speed. Fitted with steam turbines generating a combined power output of 144,000 horsepower, HMS Hood is capable of attaining an impressive top speed of 31 kts (57km/h), thus giving the warship excellent mobility. As a result, HMS Hood doesn’t have to be employed as a battleship necessarily. Instead, captains with a more aggressive tactical approach can choose to join the advance of comparably lighter vessels such as cruisers, and support them with their heavier firepower.

HMS Hood’s protection may appear quite substantial at first glance. After all, the warship is encased in a 12’’ (305mm) belt armour, stretching across all the sections containing vital ship components. However, taking a closer look at HMS Hood’s armour layout, reveals that this thick belt plating covers only a small area around the waterline whereas the areas above and below it possess much thinner plating ranging from 3 - 7’’ (76mm - 177mm). On the other hand, the vessel’s turrets and conning tower remain well protected with 15’’ and 11’’ (381mm and 279mm) of armour respectively, ensuring their ability to effectively absorb enemy fire. Lastly, HMS Hood’s complement consists of 1,418 sailors and officers. With such a sizable crew, HMS Hood is able to stay in the fight even during prolonged engagements, provided the opponent doesn’t score a lucky strike.

The ‘Mighty Hood’ will soon dock in play ports, awaiting seasoned War Thunder captains at the top of the British bluewater fleet in the next major update. In the meantime, keep your binoculars at hand and continue scanning the horizon for more news as we continue telling you more of what the upcoming update has in store for you. Until then, calm seas and happy hunting captains!