An improved version of the French wheeled tank, equipped with a deadly 90mm gun with HEATFS shells!

A series of French Panhard E.B.R. reconnaissance armored vehicles developed from 1945 by Panhard-Levassor on the basis of a pre-war prototype armored car. The chassis of this series is made with an 8x8 wheel layout, while the first and final wheelsets are steerable, and the two middle axles with metal uplifting wheels are fixed. The vehicle's transmission is reversible,making it possible for E.B.R. to move forward and backward at the same speeds - most vehicles in the series have an additional drivers post at the rear. In total, over the years of production, the Panhard-Levassor company produced more than 1,200 E.B.R. armored vehicles, with almost all of them equipped with a swinging turret of the FL 10 type and a 75 mm caliber gun. In 1963, a modernization program was adopted, which included replacing the gun with a more powerful 90 mm CN 90 F2. Within this program, about 650 vehicles were modernized. For a long time the Panhard E.B.R. served as the main armored car of the French army and was actively supplied to satellites of France on the African continent, Portugal and Indonesia. The combat vehicle took part in a number of armed conflicts, such as the War of Independence of Algeria, the colonial war of Portugal, the war in the Western Sahara and others. The E.B.R. was in service with the French army until the 1970’s, in a number of African countries the vehicle was in service even beyond the 2000’s. 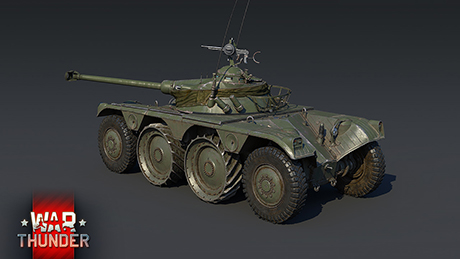 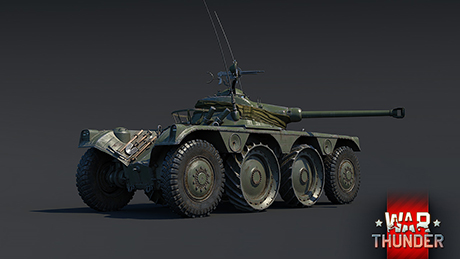 The first armored vehicles of the E.B.R. series appeared in War Thunder during the winter marathon “Operation W.I.N.T.E.R.”. The nimble scouts with a 75mm cannon and an automatic loader took the heart of our tankers for their excellent mobility on solid ground and impressive fire potential, when the annoying French quickly outflanked a group of opponents and could quickly disable several targets from the side and rear. The 75mm APC rounds had problems with the penetration of particularly tough targets from the front, and the Soviet heavy tanks or German self-propelled guns of the late period of the war remained a difficult target for the French car. The Model E.B.R. (1963) retains most of the the positive features of the earlier version and offers the commanders a new, more powerful 90 mm gun with HEATFS shells as the main means of destruction of armored vehicles. The same high speed, reversible transmission, a swinging turret - plus a new cannon with HE and HEATFS shells with more than 300 mm of armor penetration, regardless of the firing distance. In battles where the E.B.R. (1963) is about to participate, the combined protection or ERA armor sets are quite rare, therefore HEATs are definitely a good choice for almost any purpose. Do not forget to improve the skills of the driver and loader, as well as increase the general skill of the selected crew, so that the E.B.R. (1963) should fully show what it is capable of!

Together with the benefits from an early version, the E.B.R. (1963) gained some disadvantages. First, the armor is light: At the thickest part (the frontal projection of the turret), the armor thickness is just over 50mm. Secondly, the wheels: like other wheeled vehicles, the E.B.R. (1963) gets bogged down in snow, sand and mud. Choose your route carefully and keep to the roads and asphalt, where the high-speed potential of the armored car is fully revealed, both when moving forward and backward.

The E.B.R. (1963) is an excellent light tank that can be yours for progressing in the new season of the War Thunder Battle Pass named after this vehicle “Fearless Voltigeur”! Follow our news for a complete list of challenges and descriptions of the main prizes of the new season!

Vehicle Collision Physics in game - An explanation
Share the news with your friends!

Commenting is no longer available for this news
Rules
xX_FritzUlger_Xx
1

i started playing War Thunder right after the EBR Event and i was sad i would never get one, but now i can get a better version of it thats awesome

shut the fuck up

I feel ad for your ignorance. Me and others will just be fighting for EBR's in the tech tree.

I'm gonna guess the free vehicle will be another plane

Despite being hideously ugly, I want this thing.

Poor mobility on unpaved ground, ? look at the construction it is made for it !