One of the latest versions of the legendary Zero fighter aircraft featuring protected wing tanks and improved WEP mode!

In late 1944 into early 1945, the skies over the Pacific Ocean were ruled by US military aviation. The Japanese Empire was forced to deploy the already obsolete Zero against up-to-date Corsairs and Hellcats, because the development of new models of carrier-based fighter aircraft was delayed, and new Japanese army fighters often lacked range to win a tactical initiative. The design team of Mitsubishi did everything possible in an attempt to bring the Zero to the level of modern Allied combat aviation.

One of the latest versions of the Japanese carrier-based fighter was the Model 53 hei (A6M6c), developed after the design of the previous version, the A6M5 hei. Efforts to strengthen the structure and increase firepower were also traced in the new model: the A6M6c, like its predecessor, was armed with a pair of automatic cannons and three high-caliber machine guns, and also had protected wing tanks. In addition, this modification was supposed to install a new Nakajima Sakae 31 engine with a water-methanol injection system. As tests showed, the promising afterburner proved to be very unreliable in operation, so only a few A6M6c units were produced - one prototype at the Mitsubishi plant and several units of the testing batch at the Nakajima plant. 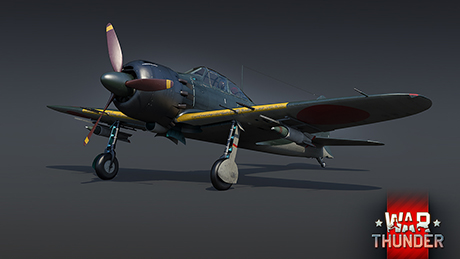 The A6M6c will be one of the prizes in the new season of War Thunder's Battle Pass.

In the A6M6c, as in other later Zero models, we see engineers trying to increase the firepower and survivability of the aircraft. Reinforced non-folding wings, protected wing tanks, pilot's armored backrest, rear and front bulletproof screens, rejection of rifle caliber machine guns in favor of high-caliber ones - the engineers believed that thanks to all these features, the Zero would be able to withstand modern US bombers and carrier-based fighters. A special feature of the A6M6c version was the installation of a water-methanol mixture supply system on the engine. And this, of course, is good because it allows the engine to operate for much longer in WEP mode, eliminating the threat of rapid overheating. In terms of flight characteristics, the A6M6c is almost completely similar to the previous model in the series, the A6M5 hei. They cannot be called bad, but here you will have to forget about the virtuoso maneuverability of the early Zeros.

Armament and suspended weapon sets replicate the A6M5 hei exactly: a pair of wing-mounted 20mm cannons and three heavy machine guns, one of which is mounted in the cockpit. The heavier but more tenacious A6M6c can go head-on with a good chance of success! In the arsenal there are two types of rockets, as well as 2x60 and 1x250 kg bombs.

The A6M6c, one of the latest aircraft in the Zero family, will be a good addition to the Japanese rank III aircraft setup for all game modes. Although the A6M6c is primarily suited for hunting ground attack aircraft and bombers at low to medium altitudes, the 250 kg bomb and belts for ground targets give it a good chance of success in mixed battles. The A6M6c will be yours for progressing in the new season of the War Thunder Battle Pass “Fearless Voltigeur”. Participate and claim your well-deserved prize!

Why is A6M still using PS3 model? This model is nowhere near the standard of quality for new vehicles even after the changes you made for A6M5c... Will you accept reports on incorrect details and dimensions?

Takemoto, people will alwaays complain no matter what they do, i think its cool

How plays this gamemode anyway and this is me saying who wasted way too much time and money on that gamemode. They need to completely revamp this gamemode before adding new stuff. By asking for more you only support the further butchering of this mode.

tabanne, First word was ment to be who, can't edid.

It's something that would come with a big update, so nothing to do with the BP.

was not expecting this, always nice to add another zero to the collection though :)

Finally an actual pass vehicle unlike the EBR that should be in the French Tech Tree. It seems like a very good zero👍

NurflugelHo229V2, Yeah, this is exactly the sort of vehicle we should be seeing in the BattlePass, not major production variants like the EBR.

hate to say it but those HE rockets don't do anything on the A6M5 Hei, i want to say that the 250kg bomb you find on the other zeros is the most effective CAS capability of any zero... this one is not special outside of having a bit of survivability and a powerful engine

oed1234, And it will probably be hopelessly lacking in speed just like all other zeros. The late zeros are over tiered

Lol make it special? They literally said its the same as the A6M5 Hei but with a methanol-water injection so it doesn't overheat as quickly while wepping in RB. It has literally no other advantages.

I'll have to say, this is quite unexpected. But not unwelcome.

Well.. I hoped for something .. better. But this is nice.

No, clones are never nice.

SoloWing_Makarov, not a clone, its an A6M5 Hei with a more powerful engine