The Sd.Kfz.251/22 is a further tank destroyer variant of the widely used German Sd.Kfz.251 series of halftracks, already familiar to some tankers. Combining its small size with an everything but small high velocity anti-tank cannon, the unique Sd.Kfz. 251/22 will soon await tankers as one of the main prizes in the upcoming new season of War Thunder Battle Pass!

In the final years of WWII, the Wehrmacht really began to feel the short supply of equipment due to the increasingly worsening war situation for Germany. Among all this, the Wehrmacht experienced a particular lack of self-propelled anti-tank vehicles as the Allies began pushing German troops back to their homeland. As a result, the order for the urgent conversion of the Sd.Kfz.251 half-tracks into tank destroyers armed with the 7,5 cm PaK 40 cannons was issued in late 1944.

After minor modifications were made, the first prototype of the Sd.kfz.251/22 was built in December 1944 while mass production began only a short while later. By March 1945 well over 200 units were produced. However, production was cut short due to the rapid advance of the Red Army in 1945. In service, the Sd.Kfz.251/22 although proving somewhat effective, suffered greatly from its excessive weight leading to frequent suspension breakdowns. Nonetheless, the Sd.Kfz 251/22 served on until the war’s end whilst captured versions continued theri service with Yugoslav forces well into the 1950s! 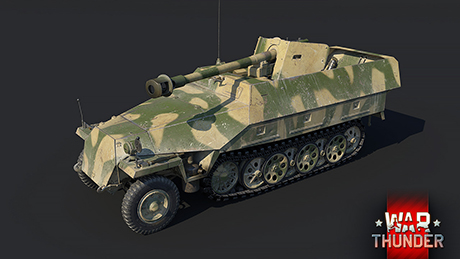 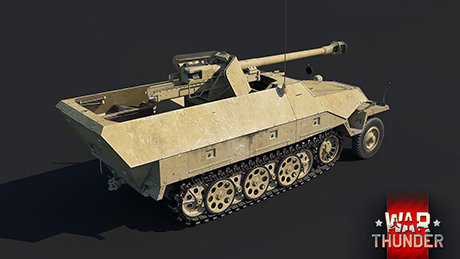 The Sd.Kfz.251/22 will be one of the main prizes awaiting participants of the New season of Battle Pass “Fearless Voltigeur”, soon starting in War Thunder.

Based on the chassis of the familiar German half-track already known to some tankers in the game, the Sd.Kfz.251/22 offers its aspiring commanders much more substantial levels of firepower thanks to its larger high velocity cannon!

Armed with the 7,5 cm PaK 40 cannon tankers may already be familiar with from other German tank destroyers such as the ‘Pakwagen’, the Sd.kfz.251/22 is ideally equipped to deal with most other hostile armor it may encounter on the battlefield! However, the vehicle’s relatively high combat mass combined with only light protection make it an easy target for both aircraft as well as commanders of lighter, and thus more mobile vehicles. As a result, the Sd.Kfz.251/22 is a true glass cannon - potentially highly effective in the hands of a skilled tanker, but also easily taken out by cunning opponents!

Be sure to add the unique Sd.Kfz.251/22 to your in-game collection by taking part in the upcoming new season of the War Thunder Battle Pass. Good hunting tankers!

Commenting is no longer available for this news
Rules
Miragen
97

Okay, can you now remove tier restrictions from daily objectives, medals, battlepass tasks, challenges and events so that we actually have a reason to use tier ll vehicles again?

I agree with this 100%. I miss playing Tier I and Tier II. No point. Gotta keep up with the events. Gotta grind the Battlepass. Gotta participate in the incentivized content.

Conte_Baracca, I mean, if u dont buy every battle pass, you can not grind it and have all the time for what you want.

If you dont have reason to play new vehicles besides a mindless grinding, why even bother playing?

Would be nice if you could stop making literally all of Germany's armoured cars and halftracks event vehicles...

This is a fact.

Make Sturmtiger an in-battle unlock/reward something similar to Nuke but less severe. And Stug IV, when?

Raiden_Black, StuG IV was one of the unfinished assets removed from the Dev Client in 2.05. It had been sitting there for years alongside countless others.

So what overcomplications are gonna be in this BP?

Can you give us a break for 2-3 months these back to back BPs aren't really helping us to stay clam and collective.

Ignore the BP, play the game, have fun, pay with cash for vehicles you REALLY want if possible. But do you need them all? I did the first one, skipped the next two (I "did" them but more just as something to focus on while looking for that 1 in 100 good match, but never paid and do not regret!)

Deranger79, Do not pay cash.

Brace yourself! Operation S.U.F.F.E.R. will start in two weeks too.

Hey look another German armored car behind the pay wall! Cmon guys give us some more armored cars in standart tree!

Bruh, germs at least have armored cars in tech tree unlike the Americans and Russians

Ehem, PAK-TRUCK if you may