Briefly: The last American battleship design to be fitted with 12’’ guns, featuring impressive firepower and protection, but lackluster mobility.

In 1908, the U.S. Navy began drawing up plans for their next series of battleships to succeed the Florida-class. Due to concerns over procurement time and oversized displacement, the decision was made to design the new ship around the existing 12’’ guns and fit the ship with six twin turrets. The result of this was the development of the Wyoming-class battleships of which two were ordered in March 1909.

USS Wyoming was laid down in February 1910, launched in 1911 and completed a year later in September 1912. After being commissioned, USS Wyoming took part in various activities in the pre-WWI period, including goodwill tours, gunnery as well as large fleet exercises. During WWI, the ship most notably took part in combined actions with the British Fleet as part of the 6th Battle Squadron of the British Grand Fleet. Together with the Royal Navy, USS Wyoming escorted a convoy to Norway, covered a minelaying operation in the North Sea and, at the end of the war in 1918, assisted in interning the German High Seas Fleet in late 1918.

In the interwar period, USS Wyoming underwent significant modification in the wake of the London Naval Treaty going into effect and was increasingly being used in service as a training vessel to help stem the ever growing demand for fresh recruits, particularly during WWII. The battleship continued being used in this role throughout WWII until it was finally decommissioned in 1947 after more than 30 years of service. 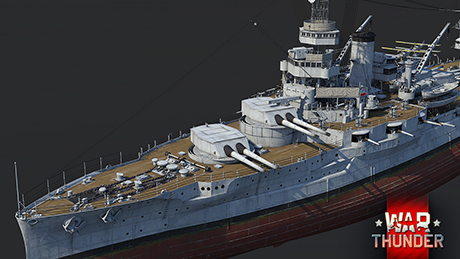 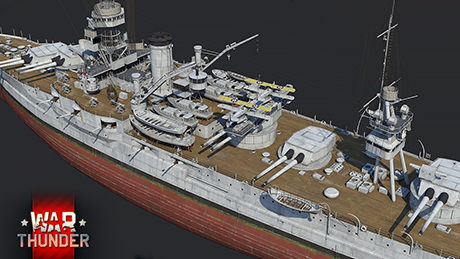 In War Thunder, USS Wyoming will be a new battleship arriving at the top rank of the American naval tree as part of the next major update coming soon to the game. Succeeding the USS North Dakota some seasoned captains already had the chance to command, USS Wyoming builds upon the familiar characteristics of its predecessor and offers its aspiring captains some notable improvements in firepower and protection!

While still armed with what at first glance seem to be the same 12’’ (305 mm) cannons found on USS North Dakota, USS Wyoming is fitted with an additional twin turret, thus increasing its total primary battery up to twelve 12’’ guns and subsequently bolstering the warship’s firepower.

Fun Fact: Due to the ship frequently operating and being sighted in the Chesapeake Bay area, it gained the nickname ‘Chesapeake Raider’ during its service.

Furthermore, USS Wyoming also features a reinforced secondary battery consisting of sixteen 5’’ (127 mm) cannons, with eight guns mounted along each side of the ship’s hull. USS Wyoming’s anti-air protection has also been increased by a further two 3’’ (76 mm) cannons, increasing the AA defence up to four in total. Despite this increase, the anti-air cannons only have a limited effectiveness against fast-moving aerial targets, meaning that aspiring commanders of this vessel still have to seek out assistance from other warships for good AA protection. Unlike USS North Dakota, USS Wyoming lost the ability to carry and launch torpedoes in a mid 1920’s refit.

While at a first glance, the armor protection on USS Wyoming doesn’t seem to differ much from its predecessor - possessing neigh identical armor values at its vital components - the warship did receive improved anti-torpedo protection in the form of enlarged torpedo bulges and the installation of torpedo bulkheads. As a result, the ship’s survivability against torpedo damage increases and when combined with the sizable complement of 1,242 sailors makes the USS Wyoming a highly durable warship even during extended gunfights. On the other hand, the increased firepower and protection also increased the ship’s displacement. As a result, a more powerful 43,187 hp steam propulsion system is installed to maintain a top speed of 21.4 knots (39.6 km/h).

USS Wyoming is expected to dock in player ports with the arrival of the next major War Thunder update and will succeed the USS North Dakota at the top rank of the American naval tree in the game. In the meantime, keep a close watch on the horizon for more news regarding the upcoming major update, “Red Skies”. Until then, calm seas and happy hunting captains!

Commenting is no longer available for this news
Rules
Flipped_StuG
16

Hopefully this ship gets refined a bit before the update, the first dev server was a bit odd for it. 33km/h top speed spaded, no HE, 2 RPM? It seemed a little unfinished, kinda like how USS North Dakota was on release.

I've waited for a better dreadnought because North Dakota is kind of bad but I have slight hope...

The Hyuga will still cut her down in a single salvo. We need 14" parity

Well since these 12 inch guns are 50 caliber vs the 45 caliber on the North Dakota and 45 caliber 14 inch guns on the Hyuga, you can expect to be a bit of a middle ground between them. I don't know why Gaijin failed to explain that in the dev blog. Anyway, just don't expect this to be dead at launch. I believe that this will be able to hold its own against all the battleships in game, with the Hyuga only being marginally better.

MONTECARLOSS, Caliber really means nothing in this context. 14 inch guns will always hit harder than 12 inch guns regardless of their gun caliber. In this situation 12"/50 guns literally just means that the guns have longer barrels compared to 12"/45s. Hyuga's 14"/45s still lob a far heavier and larger bore projectile, so no, the 12"/50 gun is still not comparable to the 14"/45 simply due to having a smaller bore. Hyuga is still vastly superior.

Can we get the Seaplanes in the tech tree too!!!?!? #Stona

I just hope we can use the seaplane on the battleship.

Cool ship model as usual. Can we now finally have a gamemode to play these big ships in?