Development of the Sea Vixen began in 1946 when de Havilland entered talks with the Admiralty on designing a future radar-equipped naval jet fighter with all-weather capability. Official requirements were drawn up in January 1947, by which time however de Havilland was already working on a design based on the preceding Vampire and Venom fighters designated DH 110.

Despite decreasing interest in the project by the late 1940’s, in September 1951, the first prototype conducted its maiden flight. However, only a year later, the same prototype crashed during an air show, thus further impeding the project’s progress. While the RAF abandoned the idea of purchasing the DH 110 by the mid 1950’s, the FAA gained a renewed interest in the aircraft and placed an order for 110 machines to be built in February 1955. Along with the order, the DH 110 received its official designation ‘Sea Vixen’.

As the Sea Vixen entered service with the FAA in 1959, de Havilland took note of the feedback gained from operational use of the aircraft and continued working on the Sea Vixen in an effort to improve its design. As a result, the Sea Vixen FAW.2 made its debut in 1962 which featured a number of improvements, of which one of the more notable ones was the ability to carry the Red Top air-to-air missiles. Over 140 Sea Vixens were built, most of which were converted over to the FAW.2 modification after its commissioning into service.

Although the British Sea Vixens never took part in any wars, they were still involved in a number of different combat operations primarily in Africa and the Middle East where they provided fire support for ground troops and flew patrols. 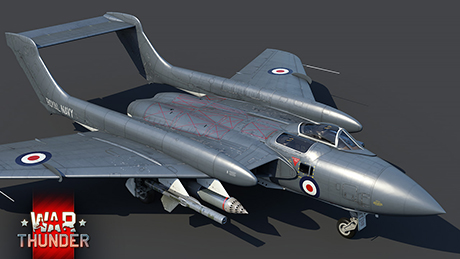 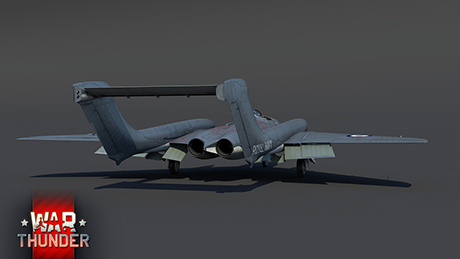 In War Thunder, the Sea Vixen FAW.2 will be a new jet fighter awaiting pilots at rank V of the British aviation tree in the next major update. The Sea Vixen will be the first aircraft of its kind in the game to feature only guided weapons as its primary means of combating hostile aircraft. However, the Sea Vixen FAW.2 has a lot more to show and some of these things we’ll cover in today’s devblog, so let’s get started!

The Sea Vixen FAW.2 is fitted with a pair of Rolls-Royce Avon Mk.208 turbojet engines which veteran British pilots may already be accustomed to from the well-known Hawker Hunter. Despite featuring no afterburner, resulting in slower acceleration than some other aircraft found at its rank, the Sea Vixen FAW.2 can still produce enough thrust to reach a respectable top speed of about 1,000 km/h at sea level while also managing to maintain a decent climb rate.

As already mentioned, the Sea Vixen FAW.2 doesn’t feature any type of conventional primary weapon, such as machine guns or cannons, instead being equipped with missiles as its primary means of dealing with hostile air targets. While this certainly takes away some flexibility from pilots during engagements, it’s somewhat compensated by the fact that the Sea Vixen can carry up to four air-to-air missiles simultaneously in a more dogfight orientated loadout. On top of that, pilots will have the choice between the Firestreak and Red Top missiles, both of which are available out of the box thanks to the aircraft’s premium status.

Pilots aspiring to utilize the Sea Vixen FAW.2 in the close air support role also won’t be disappointed by the aircraft’s sizable array of ground strike orientated ordnance. In addition to bombs of weights up to 1,000 lbs, the Sea Vixen can also carry a pair of AGM-12B Bullpup missiles as well as SNEB or RP-3 unguided rockets.

The Sea Vixen FAW.2  will be available in the Premium section of the Royal Air Forces with the release of the next major update. In the meantime, be sure to stay tuned to the news as we continue unveiling more great new features awaiting you in the upcoming update. Until then, clear skies pilots!

Commenting is no longer available for this news
Rules
Joseph_Gadzin
62

My disappointment is immeasurable and my day ss ruined

Each devblog is disspointing until we see a French tank, plane or who knows French ships 😇

We are now four dev blogs in and we have seen one ship and three premiums. Great update coming.

Premium Thunder. i wonder if there actually will be rank 7 jets or if gajins going to sell top tier

I must be blind... Where's the ship blog?

are we even going to get tech tree devblogs???

nope, time to open up your wallet :p

I love that place where you can put R2D2 next to canopy :d

Don't forget to name this patch "Attack of the Premiums".

vTuro24, are you dumb? all player who think like you are dumb, thats 3 year premium tier 6 are there in tank, why you expect the tier 7 in plane coming in, without premium in tier 6? XD its basic! its simple! its logic! any human with a brain understand this

Are you serious? Another iconic aircraft is a premium?!? Lovely Gaijin. Simply Lovely. I hope you find a way to put another Sea Vixen in the main tree.

If the guns are missing, why not try to find them?

3rd plane 3re premium in a row. What's next? Premium german F4?

Stona_WT, While you're at it please reveal the premium chinese helicopter please :3

They always release new premiums with a new rank. Why is this so difficult to understand?