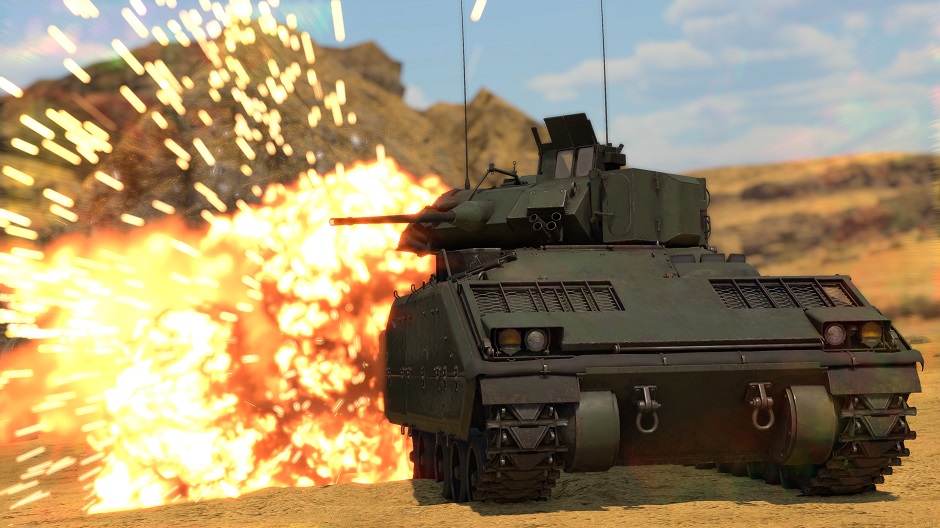 We have finalized and improved the system for simulating explosions and high-explosive impact for shells in armoured vehicles in the game.

The reliable and accurate simulation of high-explosive ammunition damage is one of the most difficult mechanics when creating a realistic damage model. On the one hand, the impact of high-explosive ammunition is a complex process consisting of several components - the impact of a shock wave, blasting action, fragmentation flow. On the other hand, it is necessary to simulate these components in real time, with an insignificant load on computing power, because at the same time dozens of explosions of different power from 20mm shells to 5 ton bombs can be created in the game.

In general, the current system for modeling explosions in War Thunder meets these requirements, however, for greater realism, we decided to modify and improve it. At the moment, an explosion in War Thunder inflicts damage with two components - high-explosive and fragmentation, while the high-explosive part is modeled in the zone of maximum damage, in other words, in a fairly small radius in which damage can be inflicted directly on parts and components in vehicles. In addition, both high-explosive and fragmentation damage are calculated separately and independently without taking into account their synergistic effect on the target. Also, the infiltration of the shock wave into an open volume or through a break in the armour was not modelled.

Due to these restrictions, the game additionally uses the mechanics of the so-called ‘hull break’, resulting in a vehicle's destruction after receiving threshold damage to the structural elements at the same time. There are tons of questions from the players about this mechanic, and it doesn't satisfy us in terms of modeling accuracy and some conventions, especially with regard to high-explosive ammunition. 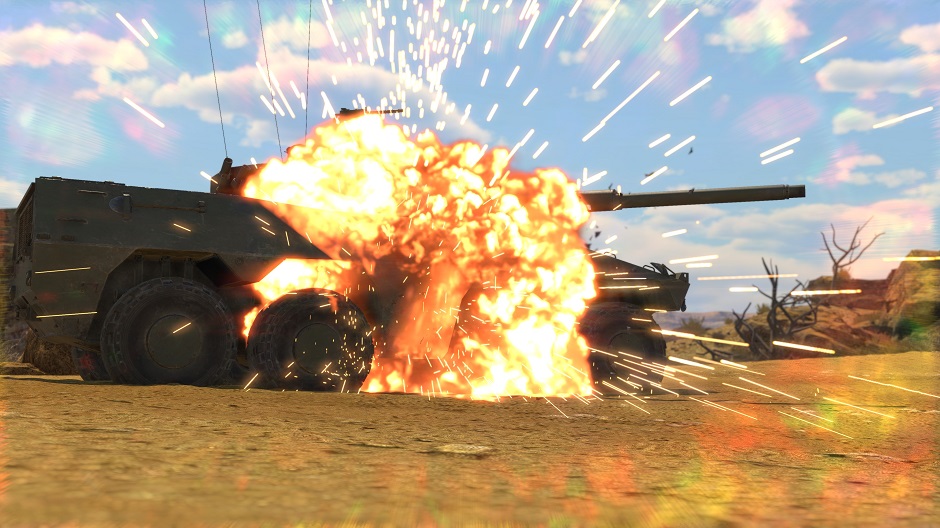 Synergy of fragmentation and high-explosive impact

Now, if an explosion pierces armour with a high-explosive action, a breach is created through which part of the fragments formed by the shell can pass through the armour, without the actual need to break it with the fragments themselves.

Crew knock out by overpressure

A new type of damage has been introduced - excess pressure damage at the front of the shock wave. This type of damage is inflicted only on the crew and works as follows. If the fragmentation or high-explosive effect of an explosion hits one of the internal modules located in the fighting compartment (crew, tanks, breech, ammunition, drives), this means that the explosion was powerful enough to break through armour at the point of impact and therefore the crew will be affected by excess pressure in addition to other damaging factors. A ‘compartment’ in this case means a volume in which there are modules used to estimate the damage. For example, for Soviet MBTs, the fighting compartment contains all vehicle crew members, ammunition, aiming drives, internal fuel tanks, the breech of the gun, and radio equipment.

In the case of tanks of the M1 Abrams series, fuel tanks and ammunition located in separate armoured compartments are removed from this list, and for tanks of the Leopard 2 series, ammunition in the turret stowage is removed from this list, but the shells in the front of the hull are taken into account. For vehicles with a crew located in different compartments, for example the Ferdinand SPG, the overpressure mechanics will work separately and independently for the crew of the command compartment and for the crew members in the fighting compartment. 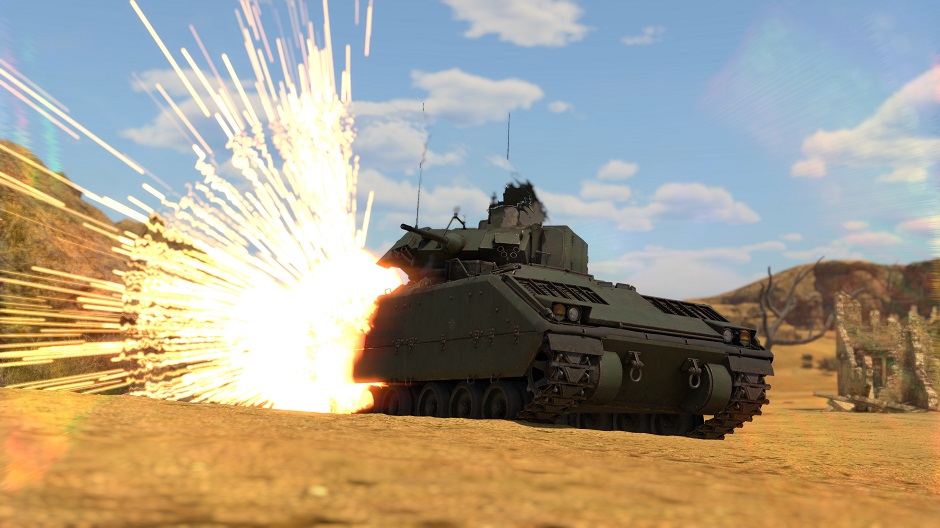 Damage to open top vehicles. Disabling of HE and shaped-charge jet hull break

In open and unarmoured combat vehicles, the crew located outside the armoured volume will also be hit by excess pressure without additional checks for a break and damage to other modules. Thus, the relevance of ammunition for "soft" targets will be increased. On the other hand, the mechanics of hull break from a shaped-charge jet and high-explosive effects will be disabled as irrelevant.

We expect these changes to make the damage model more realistic and transparent for players. The new mechanics will be introduced into the game some time after the release of the "Ixwa Strike" update as a separate server patch with the publication of an update  note.

Commenting is no longer available for this news
Rules
NATORDEN
17

Fun fact, APFSDS now in WT can shatter. The simulation tho is a bit broken and shell shattering is seen veeeeery rarely.

Soyuz2137, Very rare if you're not fighting Russian tanks. 625mm of pen and my round breaks hitting a T80U in the front 3 tikes in a row

If only they properly modeled shell shattering on the abrams

NotNobu, Why only on abrams?

"A new type of damage has been introduced - excess pressure damage at the front of the shock wave." How this work concretly. If i understand it correctly, then 152mm he can os a kth from the front easy just by pressure killing the crew. We need a video explaining those mechanics with actual exemples.

No worry. 152mm HE can't damage a M4 sherman in front. These HEs still lacks power to give any meaningful damages to most tanks.

hybride1025, have you seen what a real 152mm can do? It can easily knock out Panthers in reallife..

This could be a cool feature, but I wouldn't know since there is no tangible explanation on how it works. Instead of a wall of text, you could just make some gifs or short videos demonstrating the effect, like "that other game" does when they add a new gameplay feature.

Lol what? They did a pretty good job of explaining exactly how it works and even the specific conditions in which they take affect.

DarthRAYzie, Unlike how armour penetration works, this is not clear. It is vague descriptions and has no visual or numeric example on how this works. Yeah they told the shockwave can knock people out, cool. But that doesn't show how it works as a mechanic. It is not adequate to just throw a wall of text in a "gameplay mechanic" devblog.

Awsome addition. Is there any plans for fragment ricochets after penetration? For now they go straight and then disapear. Same for hesh fragments, that make hesh underperforming.

man this definitely wasnt hard to read and was totally understandable. can someone ELI5 this devblog

Current hull-break system bad. New system will replace hull-break. New system will take into account shockwaves from high caliber shells and damage/kill crew based on how much pressure was exerted on them. Tank modules can absorb pressure so crew don't die sometimes.

AceTheMusicMan, That's what I got from it. I'm certain there will be a video explaining it better when the system gets added.

Google exists for a reason.

Hello, I think this is a very good improvement, will we see changes similar to this on airplanes as well in the near future? Are these going to affect the high explosive and fragmentation damage to rounds such as the MG 151's Minengeschosspatrone round, or the Hispano MK.II's HEF-I/HEF-SAPI round too?

This sounds really cool. I have to ask, though, does this affect HESH at all? As far as I understand HESH works differently than normal HE. Are the differences taken into account with this new model? Again, this sounds like it'll be a nice improvement.

Is this going to change anything with machine gun calibers? Most importantly HE shells in Breda-SAFAT and Ho-103 machine guns, which act like they have no explosive filler at all.

Wow I made a list of QoL changes a while back on how useless HE was below 120mm guns . Doubt I was the reason for this change but i'm glad they are starting to look at this, especially since pretty much all vehicles have these kinds of rounds.

If we're doing that, then I'm responsible for South Africa coming into the game since I brought it up a couple of years ago on the forum.

Nice, very nice. All that's left to do is fix APHE's post-pen damage.