Briefly: The F8U-2 Crusader is the best carrier-based gunfighter in the game and true legend of the US Navy!

In 1952, the American Naval command announced requirements for a new supersonic jet carrier-based fighter to protect carrier groups from enemy aircraft and achieve air superiority. Chance Vought Aircraft Inc., which already had considerable experience working with carrier-based aircraft, became one of the participants in the competition. Their candidate differed from the competition by a variable-incidence wing. The wing tilted upward by 5 degrees, which noticeably improved taking off and landings on short decks of aircraft carriers.

Just 20 months after receiving the contract, the first prototype was built for tests. The fighter successfully passed the initial tests, in the very first flight it easily broke the sound barrier, and in a modified form went to the navy for deck tests. The first prototype series was successfully tested on aircraft carriers in the spring of 1956, after which the F8U-1 Crusader entered service with the US Navy. Work on a promising jet fighter did not stop after the start of mass production. The modified aircraft with a new power plant, advanced navigation system, radar, FCS and improved armament received the designation F8U-2.

The Crusader has become a real legend and a symbol of US carrier-based aviation for its excellent flight characteristics, ease of operation, reliability and significant firepower. The fighter received the baptism of fire almost immediately after entering the service, and since then has been actively used in combat and training missions in many parts of the world, including intensive combat service in Vietnam. Even when more advanced aircraft entered service, the naval pilots were reluctant to say goodbye to the Crusaders. “When you're out of F-8's, you're out of fighters” they said. 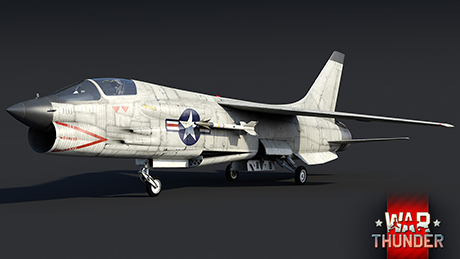 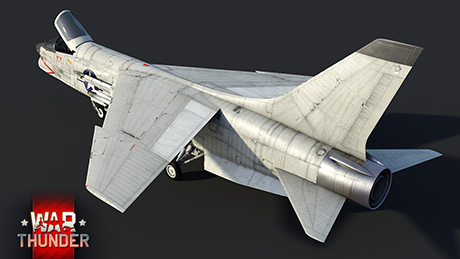 In our game, the F8U-2 Crusader multipurpose fighter will become the top US carrier-based fighter with the “Ixwa Strike” update release, and the most advanced gunfighter of the navy in the game. In addition to its excellent fighting qualities, the F8U-2 has an interesting variable-incidence wing mechanics, which simplifies takeoff and landing. The main task of the Crusader is to patrol the airspace over the aircraft carrier group, intercept and destroy enemy air targets.

Despite the fact that the F8U-2 version provides weapons for the destruction of ground and surface targets, it should be understood that the Crusader is primarily an interceptor fighter. The wing mechanics, unique for serial combat aviation, imposed restrictions on the installation of wing suspensions, so the suspended weapon is located on the fuselage pylons. It offers pilots up to four Sidewinder AIM-9B or AIM-9D missiles, an integrated launcher with Mighty Mouse rockets, large-caliber Zuni rockets (up to 8 pieces), as well as rapid-fire Colt Mk.12 20-mm cannons. The flight characteristics of the aircraft are generally typical for the top-rank aviation: the maximum speed of the fighter is Mach 1.95, the rate of climb is about 130 mps.

An extremely unusual aircraft and a true legend of US carrier-based aviation will be waiting for you in the hangars of the War Thunder update “Ixwa Strike”.

Commenting is no longer available for this news
Rules
Orphican
67

So nobody thinks I'm unappreciative: Nice we got an F8 in the game gj gaijin ty! Now that that's done one question. Are the servers going to get any attention anytime this month/year/decade? I'll be polite and say that gaijin's done relatively well in the last 8 years, ghost shells aside, but this last month or so has been the worst I've ever seen. Forget paying for anything. There's not much point in trying to even play the game if the game wont let you. Feel free to dodge like always ofc.

totally agree. along with br balancing such as decompression and perhaps something like a .5 br. servers most important first though

OddBall_1, Unfortunately gaijin stated quite a while ago "we do not consider decompression to be a good thing". I'm paraphrasing but check it out: https://warthunder.com/en/news/6333-qa-answers-from-the-developers-en#headerRoot:~:text=Q.%20Some%20months%20after%20the%20introduction,rule%20out%20such%20a%20situation%20occurring.

Gaijin's consistent bling-first market model is destroying it. I cannot comprehend letting the apex combat simulator available to the public deteriorate the way Gaijin has, but my wallet won't be opening for it again any time soon. Fix the infrastructure or build a new game Gaijin.

I hope some decompression comes Soon™

CavalcadeOfCats, Tbh it wouldn't hurt for a lot of planes to be raised in br so the jets get less compressed. As of now it's possible for me to take out my F-25 Sabre or my MiG-15bis at 8.3 and get downtiered to meet an Me 262 A1a/U1 or any other 7.3 plane which i don't need to mention is just plain unfair no matter which way you put it. Had it not been for supersonic jets being added the two first mentioned aircraft would have still been 9.0 and for good reason.

There are planes with even better missiles at 9.3

Dozer15, such as? The only top tier missile at 9.3 is the r60 which is actually worse according to most players because of its short range, Also the yak 38 doesn't have flare and can be outturned by most bombers. The a7d is the most OP plane in the game currently

LETS GOOOOOOO This plane is one I have been waiting a long time for, I am so damned happy for this.

We are reaching that point where everything usa will be equupeed with all aspect air to air missiles.

No AIM-9Cs? Or could this variant not carry them?

MONTECARLOSS, yes it did it also used a better aim 9 aswell all were upgraded to that standard so yes it should get them

Dozer15, Yes that's nice Dozer. But is the Mirage III coming in this update yes or no?