The South African Reconnaissance Car (SARC) commonly known in Commonwealth service as the Marmon-Herrington were a series of armoured cars developed in South Africa during WWII and widely used by many nations even after the war. Soon, tankers in War Thunder will have the chance to command one of the later variants as it arrives in the British ground forces tree as part of the new South African subtree with the next major update!

In 1938, South African engineers began development of a domestic armoured car design. Following the outbreak of WWII, the development of the vehicle was accelerated and a design around a 3 ton Ford truck chassis was created. However, as the South African industry wasn’t developed enough to manufacture all components domestically, many had to be imported from other countries, such as the US, Canada and the UK with final assembly then taking place locally.

The SARC entered service with South African forces in 1940 and gradually found its way into the ranks of many of the allied nations’ units, especially those of the Commonwealth, over the next few years. The vehicle quickly gained a reputation among its crews for its simplicity and reliability, despite it being considered rather light and undergunned.

At the height of WWII, in 1942 - 1943, the engineers behind the SARC sought to improve the vehicle’s capabilities in an effort to match the German Sd.Kfz. 234. To that extent, the engineers developed the heavier, 8-wheeled experimental Mark V variant, followed by the improved Mark VI prototypes.

Only two prototypes of the SARC Mk.VI were built, one being armed by a 2 pdr and the other with a 6 pdr gun. While the former was sent to the UK for testing, the latter remained in South Africa. Despite favorable test results, the increased availability of more suitable American armoured cars in the later stages of the war made the Mark VI somewhat redundant and further development was cancelled. 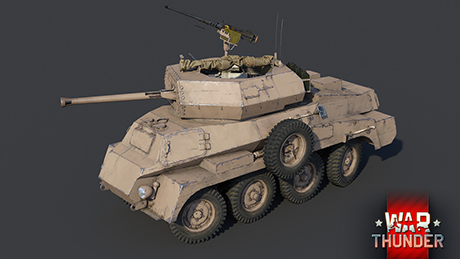 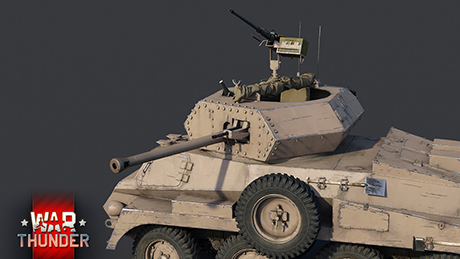 In War Thunder, the SARC Mk.VI will be a new armoured car joining the lower ranks of the British ground forces tree as part of the upcoming South African subtree arriving to the game with the release of the next major update. The SARC Mk.VI combines excellent mobility and firepower being a well-rounded vehicle soon to be favored by both veteran and novice tankers alike!

Upon unlocking the SARC Mk.VI, tankers will find a vehicle armed with a true staple of the British lower ranks; We’re talking of course about the 57 mm QF 6-pounder gun! Known to many tankers for its good ballistics and high rate of fire, the well-known 6-pdr gun is capable of easily overmatching the armour of most opponents at lower ranks, being only challenged by the thicker armour of early heavy tanks.

Being a wheeled vehicle, most tankers may expect the SARC Mk.VI to be a rather mobile vehicle, and in this regard, this rather large armoured car certainly won’t disappoint! Being powered by two diesel engines, generating a combined power output of 190 horsepower, the SARC Mk.VI is capable of achieving a respectable top speed of 40 mph (65 km/h) on roads as well as around 25 mph (40 km/h) cross-country.

The SARC Mk.VI will soon arrive to the lower ranks of the British ground forces tree and will be one of the first vehicles tankers will have the chance to unlock in the upcoming South African subtree, coming to the game with the next major update “Ixwa Strike”. Until then, happy hunting tankers!

Commenting is no longer available for this news
Rules
David_e
17

Nice little boy we have here. Waiting for an Italian IFV next

There wasn't one on the dev server, but I agree, the Dardo should be here already.

Dozer15, also the cv13 series, the various centauro and of40 based design (like draco, palmaria, porcupine, tethis and so on) not talking about planes or other prototypes

I BLESS THE RAINS DOWN IN AFRICA!!!!

funny thing is that this got moved from 3.0 to 3.3 while the prem AEC Mk II with almost identical performance is 3.0 )))

How the pakwagon is still 3.0 blows my mind. Probably for the same reason. Unique, no longer available.

The AEC AC Mk II is actually even better than this, with more armour, penetration and crewmembers.

Yes, its on the dev server

This is a VERY welcome addition. Can't wait for the patch.

Subtree contains no submarines at all .

Peter_of_Dactyle, I know right what a disappointment

Dear Gaijin, now please add the Sd Kfz 231 for the Germans, and I'm guaranteed not to stop laughing when in sim battles the Allied side has the SARC on the team and the Axis one has the 231 (friendly fire 100% guaranteed...)

Germans don't need anything else added for them for like 5 major updates lol. Japan, France, Italy. These are the nations they need to fill

LynxSpray, So we just fuck Germany over with a MiG-21MF as their single viable top tier?

so thats why it looked familiar to me