SMS Kaiser was the lead ship of the Imperial German dreadnought battleship class, built in the years leading up to the outbreak of WWI. Soon, this Great War naval veteran will once again be joining the ranks of the German navy as it arrives in War Thunder naval battles as part of the next major update “Ixwa Strike” coming to the game!

During the 1900’s, the German Imperial navy placed orders for five new dreadnought battleships to be constructed in order to replace older warships of the Siegfried and Odin classes. These five new ships would become the Kaiser-class battleships, which among other technological advancements, featured turbine propulsion systems - a novelty on German warships at the time.

Kaiser, the lead ship of the class, was laid down in Kiel in December 1909, launched in March 1911 and subsequently commissioned in August 1912. After crew training and taking part in several fleet exercises, Kaiser along with its sistership König Albert and cruiser Strassburg, was sent on a long-distance cruise to German South-West Africa and South America to test the novel steam propulsion system for endurance and reliability. The flotilla returned from their cruise to Kiel in June of 1914.

Following the outbreak of the Great War, Kaiser took part in nearly every major naval operation of the conflict. This included the famous Battle of Jutland in mid 1916, where Kaiser sustained two direct hits, but suffered no substantial damage. Furthermore, Kaiser also took part in Operation Albion in 1917, bombarding Russian coastal positions in the Baltic, and crippling the destroyer Grom, followed by her sinking.

With the German surrender in November 1918, part of the High Seas Fleet, including the SMS Kaiser, was interned at the British naval base at Scapa Flow. The commanding German officer, Rear Admiral Ludwig von Reuter, believing that the fleet would be seized by the British, ordered the scuttling of the entire fleet on 21st of June, 1919. Kaiser was later raised in 1929 and broken up for scrap in the early 1930’s. 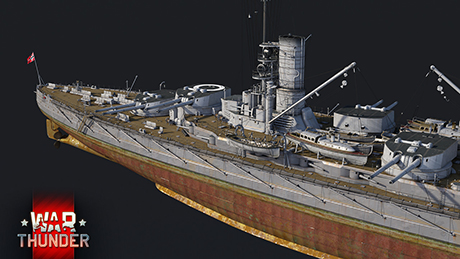 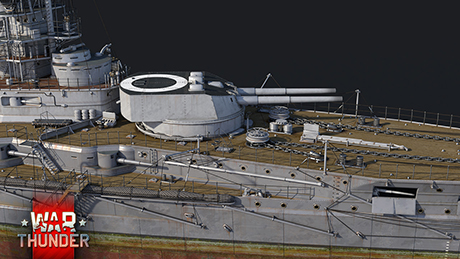 In War Thunder, SMS Kaiser will join the ranks of the German navy in the game, following the release of the upcoming update “Ixwa Strike”. Heavily protected and fitted with large-calibre cannons as well as a formidable secondary weapon arsenal make the Kaiser a true royal leviathan on the high seas and a feared opponent amongst other warships.

SMS Kaiser’s primary weapons arsenal consists of ten 30.5 cm cannons, split between five dual turrets. Although it may not seem like it at first glance, Kaiser does in fact possess a very narrow firing angle in which it can align all guns to fire on a single target, giving captains a narrow window of opportunity to unleash the ship’s full firepower. On the other hand, doing so does mean exposing a full broadside to incoming enemy fire, thus lowering the effectiveness of the armor.

For captains of enemy warships who dare getting too close to his majesty, the Kaiser holds a very unpleasant surprise in the shape of fourteen 15 cm secondary battery guns - seven on either side of the ship’s hull - assisted by 12 8.8cm guns to complete the total devastation.

Lastly, Kaiser has a final trick up its sleeve - five submerged 500mm torpedo launchers, of which one is mounted right on the bow of the warship. Although fixed in place, these concealed weapons may catch the occasional captain off guard, allowing particularly resourceful captains to apply some highly unorthodox tactics  whilst commanding the Kaiser in order to achieve victory over their opponents.

SMS Kaiser is, as typical for this class of warship, extremely well protected. Being wrapped up in an armored belt ranging in thickness from 180 to 350 mm and whilst possessing a sizable complement of 1,084 sailors, Kaiser is able to sustain some quite serious damage in battle, without slipping beneath the waves. However, the price of such superb firepower and protection will naturally be paid in mobility. Namely, generating around 28,000 horsepower, Kaiser can only get up to a rather modest top speed of 23.4 kts (43.3 km/h).

SMS Kaiser will be reinforcing the ranks of the German navy in War Thunder very soon, arriving as one of the first ships of its class in the game in the upcoming update “Ixwa Strike”. In the meantime, stay tuned to the news to be informed on all the latest developments surrounding the upcoming update. Until then, calm seas captains!

Commenting is no longer available for this news
Rules
Flipped_StuG
77

Can we stop with the Dreadnoughts? They were the worst addition naval forces have ever gotten, and we're just getting more of them which only makes things worse. This won't fix anything without BR decompression, fixed DM's, and maybe even a 5.7 BR gate. If anything the ones we have should be removed. And, another German one when they have the second-best Dreads in the game with the best overall lineup? They're the last country who should be getting more Dreads/BC's at the moment.

Don't forget the steaming hot garbage that is the naval econ. What a mess this mode has sadly because. Gaijin only cares about the quick inflow of cash they get from dropping these crazy to grind, easy to pay for ships. What a crapshow this mode has become. So disappointing. :/

G'day StuG, Overly daft indeed to give them another such vessel even when they have three an another nation with zilch (looks at Italy), But yep 2.01 was a massive mistake be it Dreadnoughts, Economics & TT split all pointless to play especially the DM's, Just wish the devs would listen to us older NF players An yes I also agree for the removal of them too.

[email protected], I love the Regia Marina, and I'm British as well, but I think France should get a naval tree before Italy gets battleships. Imagine how much we'll all get to laugh at the French fleet? It'll be a whole baguette tree of meme and ridicule.

People should really start playing boats and ships, it's fun and a big shame that there are not so many players populating those modes

DD's are fun, but BB gameplay is some of the worst in WT. Most CL/CA's are irrelevant due to them, too. This ship and every other Dreadnought only makes naval worse, not better.

Gaijin had to add bots to the mode, that's how broken they made it and that was before Dreads got added. Gaijin built naval on a unstable foundation. Dreads are just more floors to that foundation that makes the mode worse and worse. I've lost all hope as a CC for Naval, yet I keep trying to play it. It's just....sad what naval has become. :(

Haven't you forgot about something... Italy perhaos? The Regia Marina... being the only nation without a battleship/dreadnought? :(

I guess you forgot about the French?

Dante has been leaked for the next patch already.

Portugueseotaku, Dante was not leaked. some random list from a discord chat doesn't confirm a vehicle

Another one? Nice now i need even more DOVEBLEEEEEEEEEEEEG

It's enough for today :)

And Italy still lacks one battleship in its tree

Another worthless ship for a worthless mode that nobody plays. Add real vehicles.

TerikG2014, So many people like ships that they had to add ai...

Real vehicles, like what? Tanks are so puny they don't matter in the face of a single naval gun and the only planes that are worth anything are at least a couple updates away.

I get that the big three are the main priority, but its been two patches since Dreadnoughts were added and Italians have gotten none, give Italy some love. Even if it isn't a BB, give us something worthwhile that isn't horrendously bugged.