The first Chinese wheeled SPG in War Thunder! The PTL02 is still in service with the Chinese PLA.

In the late 1980’s, the NORINCO corporation successfully tested the Type 87 armored vehicle. The prototype featured a 6x6 chassis of a prospective Type 90 armored personnel carrier with a 100mm anti-tank gun. The prototype vehicle successfully passed the tests, but was not put into service.

The army authorities returned to the project in the early 90’s, when, in the course of modernization, the PLA began to form mobile motorized infantry formations. This was where the Type 87 researches came in handy: by 2003, on the same 6x6 chassis of the new Chinese armored vehicles ZSL92 and ZSL92A, a PTL02 infantry support vehicle appeared with a 100mm smooth-bore cannon in the turret. The 19ton infantry fire support vehicle possessed significant mobility and a weapon capable of effectively destroying fortifications and armored vehicles, except for modern MBTs.

Mass production of the PTL02 has been going on since 2004, the SPG is widely used by the Chinese army and is produced for export in a version with a 105mm gun, unified for the use of Western-style ammunition. 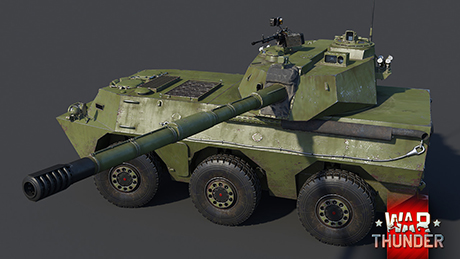 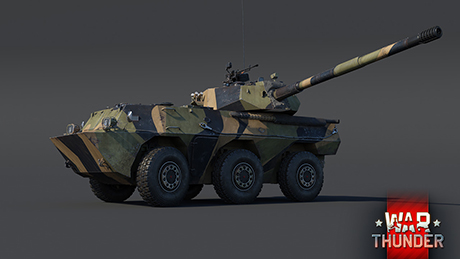 In War Thunder, the PTL02 will be the first high-ranked wheeled vehicle in the Chinese armored vehicle tech tree. A tank destroyer of this class was really missing in the rank V-VI setup: the vehicle is light-weight and lightly protected, but with a good gun.

Indeed, made on the basis of APC, PTL02 cannot protect herself against something heavier than a 12.7 mm machine gun round, and the wheeled chassis overcomes off-road somewhat worse than the tracked one. But, having taken a position behind cover, the commander has at his disposal an excellent 100 mm calibre smooth-bore gun, good shells, a stabilizer and night vision device. This wheeled Chinese vehicle copes well with the armor of early MBTs, but rank VI tanks will have to be hit on the side or from behind.

Overall, the PTL02 will be good company for rank V medium tanks and will act as an alternative to the Chinese BMP-1 for long-range shooting due to better stabilization of APFSDS shots. The first Chinese wheeled SPG arrives in hangars with the release of the next major update. Stay tuned to learn more!

Commenting is no longer available for this news
Rules
efetenekeci
92

This is what happens to your Centauro model at alibaba.com

Even though I don't play china, nice to see it's getting some love

Same, its nice to see all trees get some love. Not just the big 3.

Dozer15, we havent seen any vehicles from the big 3 yet

finally some minor nation attention! this patch is gonna be fire! also something for japan please and its gonna be perfect

KingOfGoblins, pointless because gaijin always focuses on the big nations. maybe if minor nations actually got some vehicles they will be more competitive.

is Japan or China minor nation?

dkjfdjlf, depends on how you define minor and major.

Funny to see how you are annoyed at "another" wheeled vehicle when this actually is the first one the Chinese tech tree has received. Looks like reading the devlbog's 3rd line is too much for you

OhGodNotTheAim9, He also ignores that Gaijin is working on SPAA for China, and has been for over a year. Ignoring that development isn't always fast.

Not just btr, but ZHALO.

Polish Tech Tree needs to be between Germany and USRR to maintain historical accuracy.

there is already a soviet tree

LightningMcLeon, They can't put Poland in Germany or USSR because Poland hates both, it's either they get their own tree or it goes to the Brits