HMS Blackpool was a British Type 12 frigate, also known as the Whitby-class, built for the Royal Navy at the dawn of the Cold War. Incorporating many of the lessons learned from WWII, this state-of-the-art early Cold War frigate will soon be joining the ranks of the Royal Navy in War Thunder, arriving as part of the next major update!

Briefly: An early Cold War British frigate, designed based on the experiences from WWII and incorporating excellent seagoing characteristics and a large number of torpedoes.

Development of the Type 12 frigates, or Whitby-class as they would also become known, began in the early 1950s at the very start of the Cold War. Developed to be fast, ocean-going frigates for convoy escort duties, the Whitby-class featured a novel hull design and incorporated many new features all derived from the experience gained during WWII. Subsequently, the Whitby-class was constructed with a heavy focus on anti-submarine warfare capabilities, thus being able to effectively combat some of the most modern high-speed submarines.

As a result, ships of the class resembled destroyers in their size and, due to their high construction cost, only eight ended up being built by the late 1950s. The Whitbys remained in active service with the Royal Navy up until the 1970s before they were gradually decommissioned as more modern ships began to take their place. 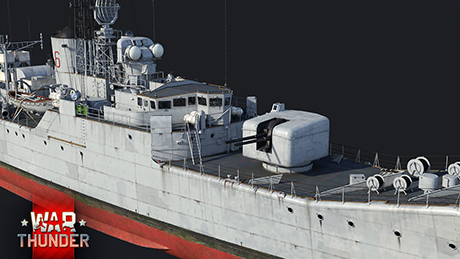 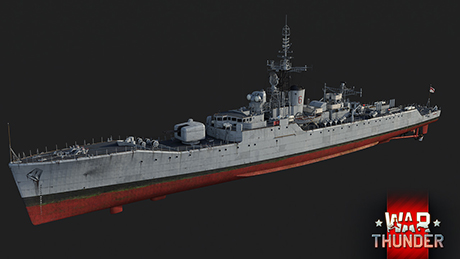 In War Thunder, HMS Blackpool will be a new frigate joining the top ranks of the British coastal fleet tree with the arrival of the next major update to the game. Highly mobile and armed with a number of different weapon systems, HMS Blackpool is sure to become one of the new favorite vessels among British captains who highly value versatility!

HMS Blackpool, despite not bristling with guns and other weaponry like the German Köln-class frigates for example, makes up for its lack in sheer quantity of weapons with their potential versatility. Namely, the vessel is equipped with a selection of very diverse weapon systems, ranging from a twin quick-firing 4.5’’ (114 mm) turret on the bow, over a twin 40 mm Bofors turret abaft of the superstructure to 10 x 533 mm torpedo launchers (including two twin-tubed, 12 torpedoes in total) on each side of the hull and even possessing two three-barreled depth charge mortars on the stern!

As a result, HMS Blackpool is unlikely to single-handedly win every engagement against hostile surface targets as its lack of raw firepower simply doesn’t allow it to trade blows with its opponents. On the other hand, when working with several other vessels in concert, the flotilla as a whole may greatly benefit from HMS Blackpool’s extremely versatile arsenal, being able to practically take on any opponent. Be it a battleship, a fast patrol boat or even an aircraft - HMS Blackpool always has the right tools for the job ready to go!

Furthermore, as a frigate, HMS Blackpool should have no trouble keeping up with most of its allies and outrunning some of the more dangerous opponents it may face on the battlefields. Thanks to its steam turbine propulsion system, generating a respectable 30,000 horsepower, HMS Blackpool can reach speeds of 30 kts (56 km/h). This, when coupled with its good agility gives HMS Blackpool very good mobility in general, allowing it to quickly maneuver around the battlefield and come to the aid of its allies on short notice.

However, relying on the ship’s mobility is also something aspiring captains of this machine will absolutely need to do unless they seek to become expensive sea floor decor. Despite having a complement of 231 sailors, HMS Blackpool is only lightly protected, meaning that even smaller attack craft may pose a serious threat to the ship if detected too late!

HMS Blackpool is soon arriving to the top ranks of the British coastal fleet tree with the release of the upcoming War Thunder major update. In the meantime, make sure to keep scanning the horizon for further news as we continue unveiling more exciting new features coming soon to the game as part of the next major update. Until then, calm seas and happy hunting captains!

Commenting is no longer available for this news
Rules
vTuro24
104

Fix naval before adding more ships. If this thing's br is within DD range then it's just more cannon fodder in a poorly designed game mode. Who would ever want to play it?

This. Naval is so broken, no amount of new ships is going to fix it, it's just going to cause more problems.

and this thing maybe need 380000RP,more than million SL

SPC180, As it's " joining the top ranks of the British coastal fleet tree" it probably will. "Frigate" too so it will spawn with the big ships. Hopefully 3.7 at best.

Yea, the whole naval RB tree needs expanded by at least 100%. And I say this as a top 200 rated naval RB player. By God, they only half fixed it. They only. Half. Fixed it.

I feel like gaijin doesn't know what they're doing with naval. Throwing more ships and especially modern ships at this gamemode isn't going to fix anything.

All aboard to the hype ship!

what hype ship, I am pretty sure there are around only 136 people playing naval

KingOfGoblins, You have hirohiko, yoshihiro, yoshihiko and all those other ai's that will be on the hype ship, the ones that only target you.

Stona_WT how about you actually try to fix naval instead of just throwing more ships at the problem. It's not helping and in fact it does quite the opposite.

kusajkoo, Developers that actually fixes game play are very expensive, very few and may not exist!

We needed a ship to sail though all the salty "Gaijin gib [insert meme vehicle of the month here] now!" Comments )) But in all seriousness, this is blog no 1 of this update. Lots more to come for everyone.

Smin1080p, still a waste of a dovbleg in 98% of the communities eyes

Not gonna lie I wasn't expecting dovblegs this early, so that's pretty neat. On the other hand this ship seems kinda terrible.

It's a chance to prove real valor at sea. A ship not everyone can shine in.

It's a chance to prove real valor at sea. A ship not everyone can shine in.

Time to become one of those... when Viggen?

Not now. So you can go back to not being one of those.

GIVE ME MY VIGGEN!