The F-84F Thunderstreak is a further development of the preceding Thunderjet, introduced in the early 1950’s. Strongly resembling its predecessor, the F-84F offers improved performance to a somewhat familiar airframe and will await all pilots in the upcoming War Thunder “Hot Tracks” Update!

Briefly: A further development of the F-84 Thunderjet, featuring a new wing design and a more powerful engine, resulting in improved performance.

In the late 1940’s, the manufacturer ‘Republic’ sought to improve the performance of the F-84 in order to bring it closer in line with the F-86 Sabre. As a result, it developed a new variant of the Thunderjet, designated F-84F. The new aircraft featured, among other changes, a new swept wing and a more powerful engine than its predecessor. Although Republic initially intended the new aircraft to be an extensive modernisation of the base F-84, possessing a high degree of part compatibility with preceding variants, in the end, only less than 20% of the parts were interchangeable, resulting in the F-84F Thunderstreak becoming its own independent design.

Following its maiden flight in the early 1950’s, the F-84F was ordered into production. However, the USAF focus on strategic bombers at the time resulted in some critical component manufacturing processes being prioritized for bomber production, ultimately leading to a staggered production start of the new F-84F.

The Thunderstreak officially entered service with the USAF in 1954, but was quickly phased out of active service due to engine issues before being reactivated in the early 1960’s as tensions between the two superpowers began to rise again. Ultimately, the F-84F kept flying under American colors well into the early 1970’s before finally being retired as newer aircraft replaced the Thunderstreak in active service.

The F-84F was also widely exported to NATO members. Chiefly among them were Germany, France, Italy, Belgium, Greece, China, the Netherlands as well as others. In total, well over 2,100 F-84F Thunderstreaks were built, with the Greek Air Force being the last to retire their F-84Fs in 1991. 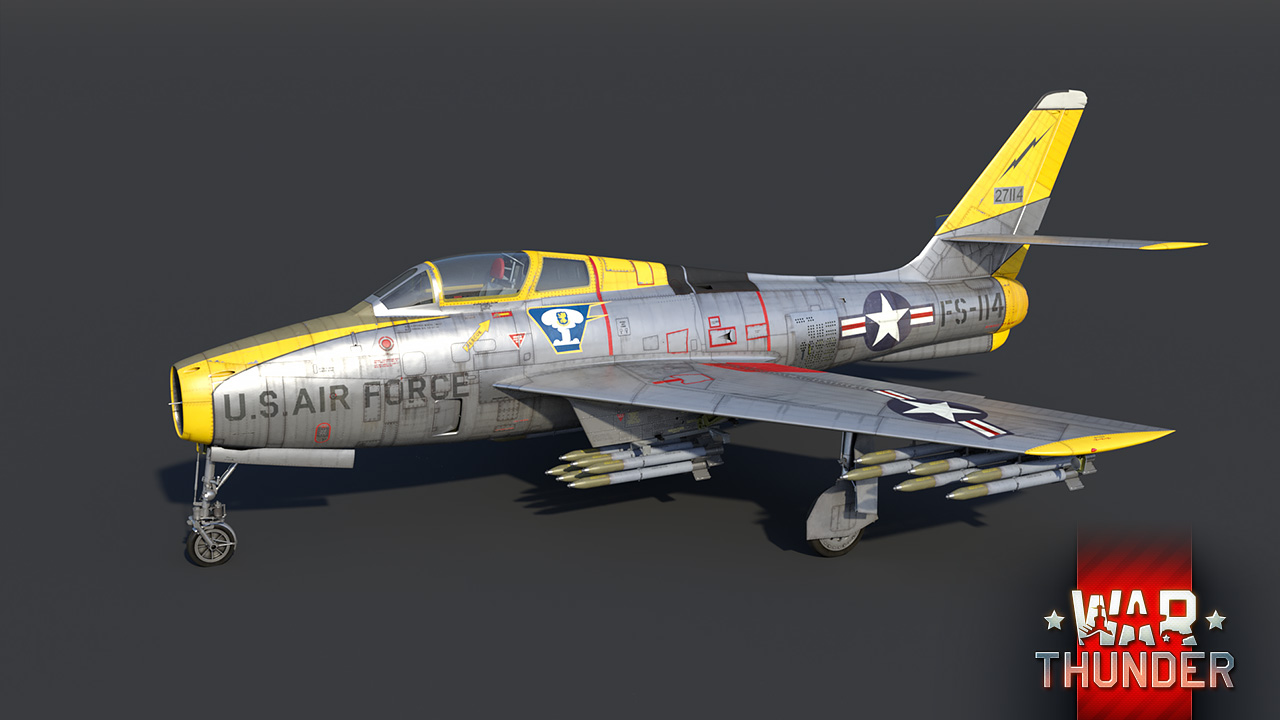 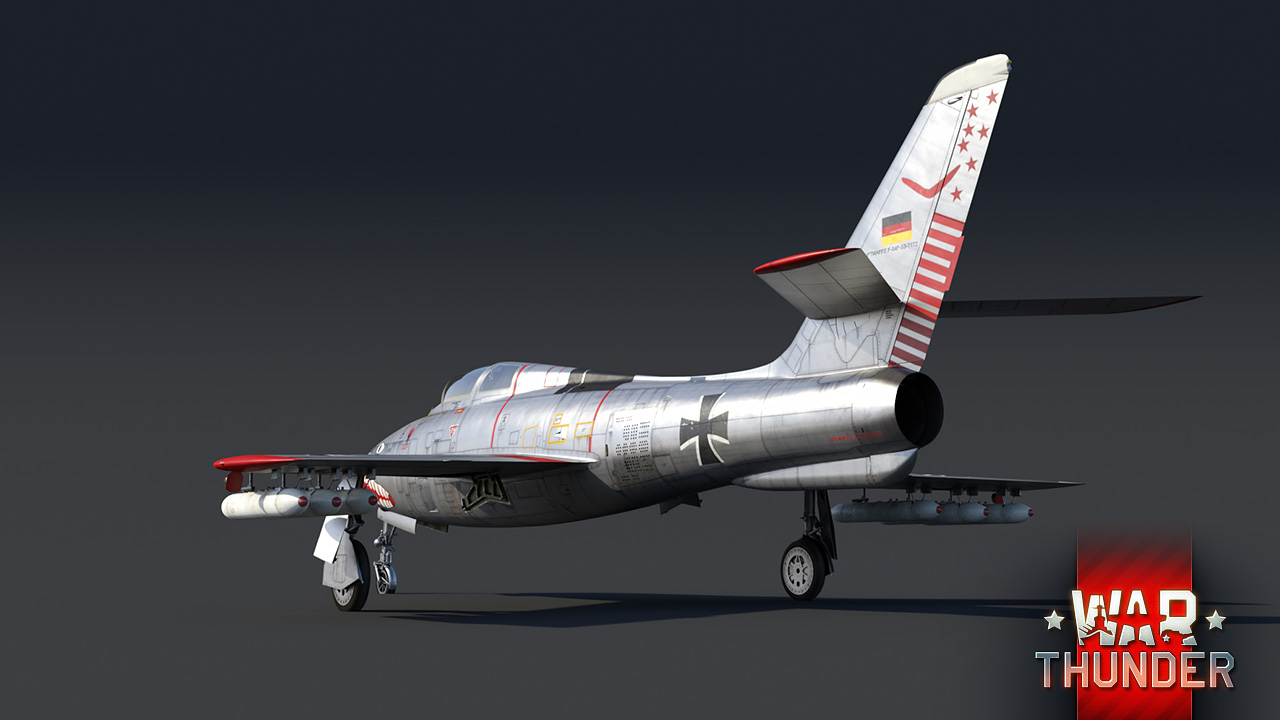 In War Thunder, the F-84F Thunderstreak will be a new rank V jet fighter making its way to the high ranks of not just the American aviation tree, but also those of the German, French and Italian trees! The Thunderstreak inherits many of its predecessor’s signature features, such as a sizable payload for example, while combining them with improved performance characteristics.

Despite its clear visual resemblance to the preceding Thunderjet, pilots will almost immediately spot one of the core differences while observing the silhouette of the Thunderstreak - namely, the new swept wing. Additionally, the F-84F is fitted with a Wright J65 turbojet engine, replacing the J35 found on the preceding Thunderjet variants. As a result, the F-84F received a considerable performance improvement over its predecessors, being able to achieve a higher top speed of 685 mph (1102 km/h) at sea level. 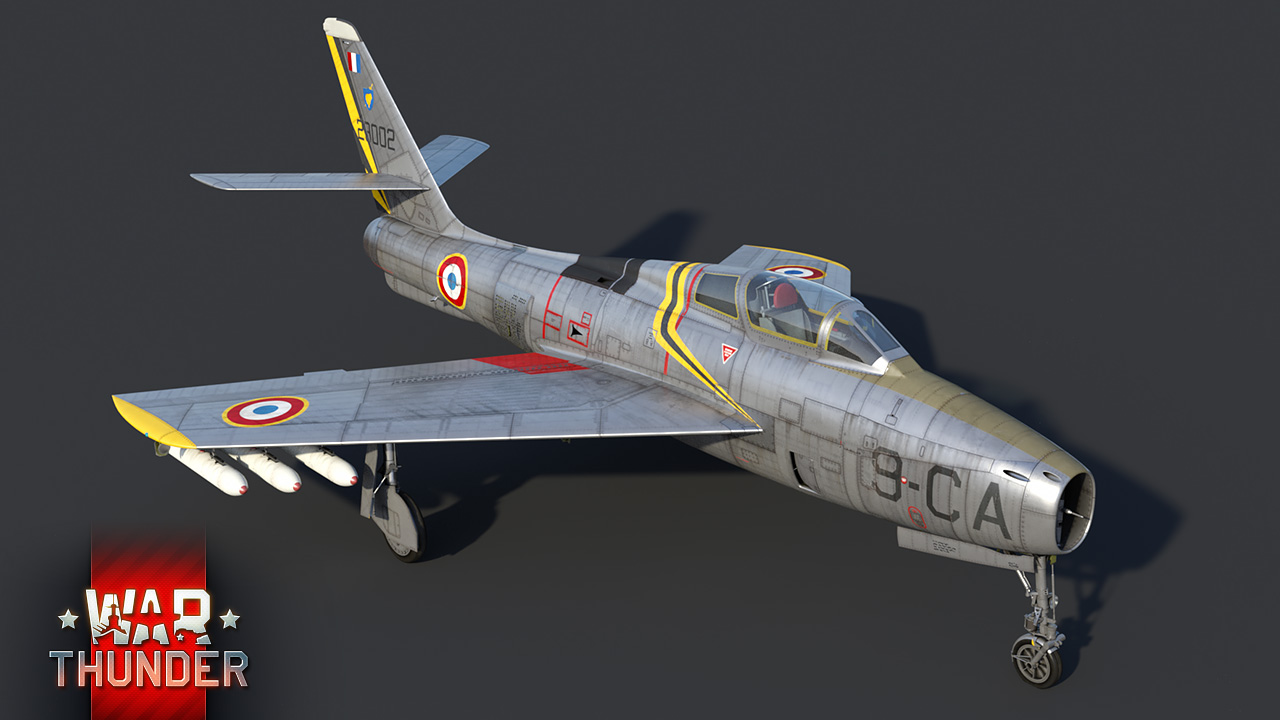 Fun Fact: Modified versions of the F-84F were used in an experimental project to mount parasite fighters on a B-36 Peacemaker bomber.

F-84F retains the excellent payload carrying capabilities of its predecessors and thus features an impressive secondary weapons arsenal. Though in stark contrast to some of the more advanced aircraft introduced in recent updates, the F-84F can only equip ‘low-tech’ (but no less deadly) ordnance in the shape of unguided bombs and rockets, including HVAR and FFAR rockets. Furthermore, the aircraft also retains its six .50 cal machine guns, found on preceding modifications of the aircraft. 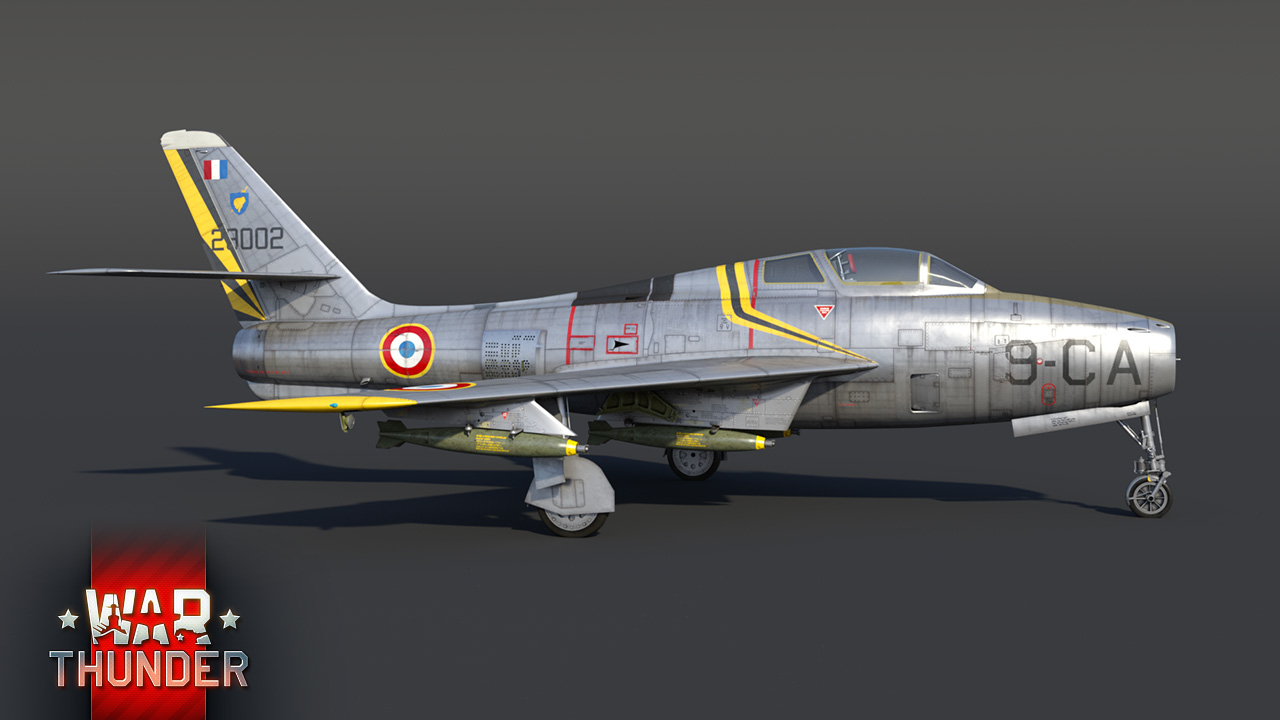 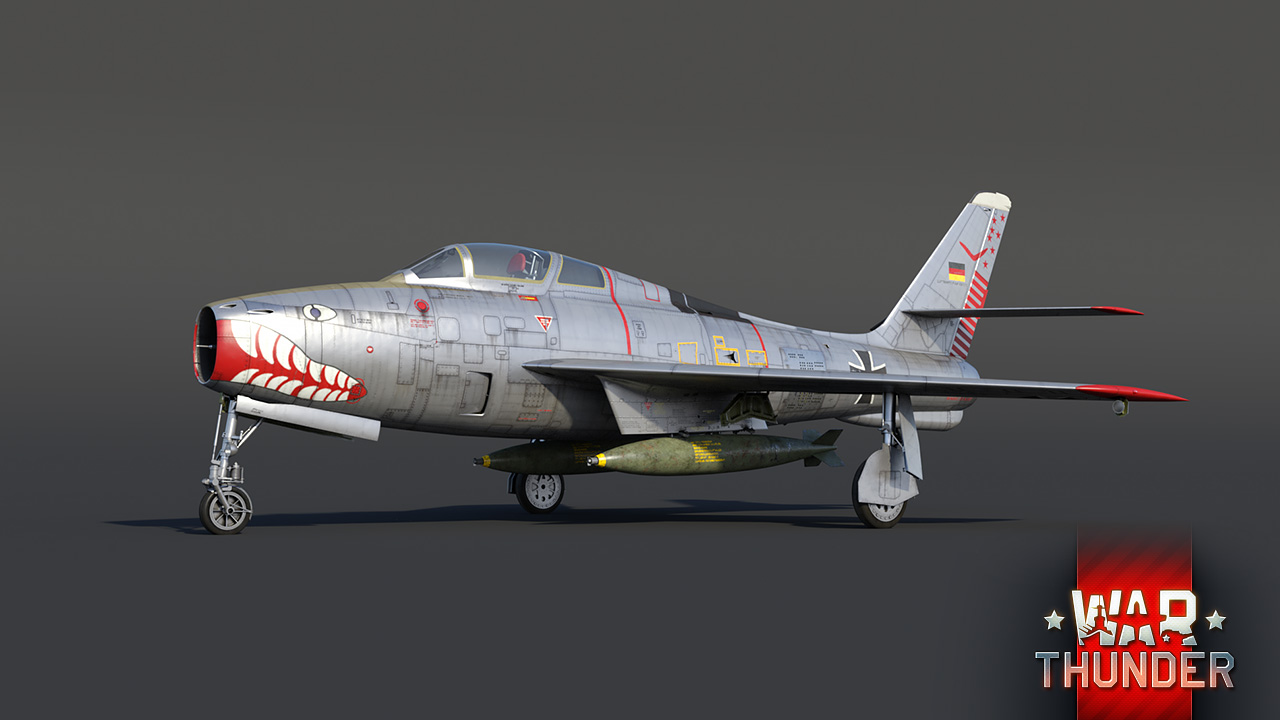 Fun Fact: Richard Bach, author of the ‘Jonathan Livingston Seagull’ novella, was a pilot of the F-84F Thunderstreak during his service in Europe.

The highly anticipated F-84F will be a welcome addition, particularly to the German and French aviation trees as it gives fans of these two nations access to a capable, early Cold War fighter aircraft, as well as helping to bridge the gap between older and newer generation jet fighters.

The F-84F Thunderstreak is on final approach and will soon arrive to players’ hangars with the release of the next major update coming to War Thunder very soon. In the meantime, make sure to stay tuned to the news as we continue unveiling what the upcoming update has in store for you. Until then, clear skies and good hunting pilots!

Commenting is no longer available for this news
Rules
surfinbird
20

Honestly ,I know italy used these so ,happy to see another addition to Italian tree, but some italian IFV or other cool stuff in future would be great ,i know you guys market towards what makes you money ,after all its only business but some love to the italians is always appreciated ,Thank you ,and good luck in your next battle!

Dardo and C13 variants is something Italy really need.

Wolf_89, Hijacked comment. Gaijin, can you remove the cap of 3600 on the warbond shop now that the battle pass has changed the system to 75 days. I'm only on level 49 so I can't purchase any vehicles out of the shop yet but I keep hitting the 3600 cap and I'm forced to spend war bonds in order to even collect the prize of war bonds from the battle pass. Even if you move the cap to 5000 that would be a huge help.

Oh shut up already, everyone is getting tired of your rambling about the Type 10. We get it - Japan needs it, but spamming about it under every devblog is just annyoing.

StaliniumBandit, no one said a word basically when ppl where whining germany suffers or GIB T 90 so stfu

will you just shut up about it. the more you spam the more its less likely that they will add it same with when the chinese tech tree showed up everyone started spamming for ZTZ99 and then one day they've stopped, so now they got it.

f4 f phantom for Germany when? and F104g flares were and mig21mf?

No, no more phantoms, for the love of god.

n0_jETs_gAnG, russia have 4 migs and USA 2 F4 and Germany have the same mig21MF from long time

what even is that abomination?

_Reardon_, Yes I would like to purchase 20 liters of bleach to clean my eyes

A fighter with 4 engines? yes pls

Honestly I don't think the german tree needs it for now, you have good CAS options R/3 and a good fighter MiG-21MF, until they can make west germany face east germany I don't see it worth adding

They forgot to mention the Italian tree also gets this plane

No, they didn't, go read it again