Pola: In It Together
15 December 2020 Development

Pola was the last ship of the Zara-class of Italian heavy cruisers to be constructed, intended to serve as the class’ flagship. Soon, this well-known veteran of the Regia Marina will join the ranks of the Italian blue water fleet in War Thunder, docking in player ports with the release of “Hot Tracks”, the next major update!

Briefly: The last ship of the Zara-class to be built, possessing only minor visual differences to its sisterships and offering premium in-game bonuses.

Pola was laid down at the OTO Shipyard in Livorno in March 1931 as the last of the four Zara-class heavy cruisers. Following the class’ nomenclature, Pola was named after a former Austro-Hungarian coastal city (today Pula, Croatia) which was annexed by Italy following the end of WWI. Pola’s design remained virtually identical to the other ships of the class. However, as Pola was intended to act as a flagship, it received a larger bridge superstructure in order to accommodate the additional staff. This, as well as the missing ‘carved out’ sections of the hull sides below her bridge, distinguish her from other ships of the class.

Pola was launched in December 1932, and after only a brief fitting out period, was officially commissioned into service with the Regia Marina in the same month. In the interwar service period, Pola took part in two fleet reviews and participated in Italian non-intervention patrols during the Spanish Civil War along with other members of her class. Prior to the outbreak of WWII, Pola supported Italian ground forces during the occupation of Albania in April 1939.

During 1940, Pola frequently operated with her sister ships in concert with other elements of the Italian navy and engaged in a number of clashes with the Royal Navy in the Mediterranean. Pola was docked at Taranto during the devastating British air raid in November 1940, but unlike many other Italian warships present there, survived the attack unscathed.

After engaging British forces in the Battle of Cape Spartivento in late November, Pola found itself once again under air attack while in port at Naples. This time however, the ship did suffer minor damage and had to be drydocked for repairs until February of the next year.

After leaving drydock, the first major operation in which Pola took part was the Battle of Cape Matapan in late March 1941. It would also become the last battle, not just for Pola, but also for two of her sisterships - Zara and Fiume. Originally, the operation saw the assembled Italian fleet under the command of Admiral Angelo Iachino intercept a British convoy south of Crete. Pola was successfully torpedoed by British aircraft launched from HMS Formidable, quickly losing all power.

With Pola dead in the water, the Italian admiral ordered Zara, Fiume and a handful of destroyers to assist Pola later that night, however, unknown to the rescue party assembled around Pola, the superior British fleet closed in on them under the cover of darkness and guidance of radar to within point blank range before opening fire. The resulting naval engagement saw the destruction of mostall Italian warships present with heavy losses of 2303 dead and 1411 captured. After the brief battle, Pola, still afloat, was boarded by British sailors who searched the ship for valuables, taking her remaining crew as prisoners. In the early morning hours of 29 March 1941, the stricken Pola was torpedoed by the destroyer HMS Nubian, ultimately sealing her fate. 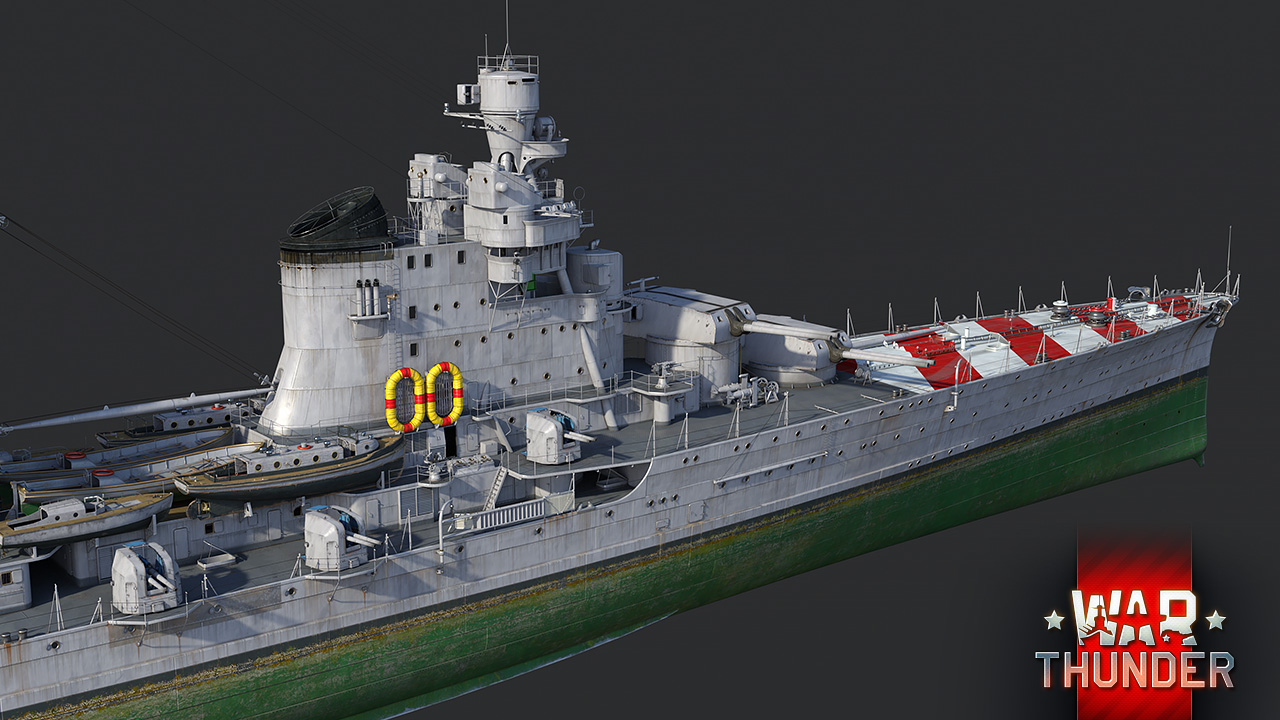 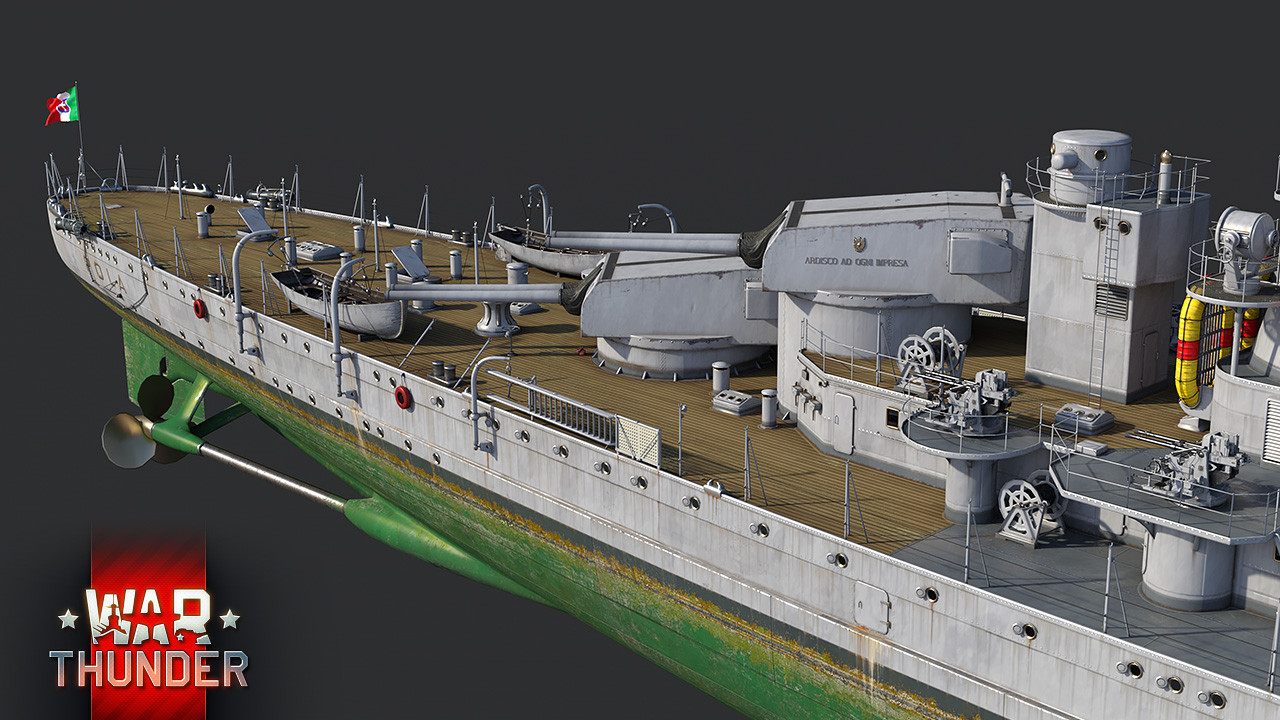 In War Thunder, Pola will soon be joining the ranks of the Italian bluewater fleet with the release of the next major update coming to the game. Featuring virtually identical characteristics as her sistership Zara, introduced in one of the previous updates, Pola will not only further expand the fleet size of the Italian naval tree, but also offers its prospective captains higher rewards thanks to her premium vessel status.

As already mentioned, Pola inherits most of its core characteristics from her sistership Zara, already familiar to some captains. As a result, Pola features the same balanced combination of firepower, mobility and protection as Zara, making her just as versatile of a warship as Zara.

Unlike Zara however, Pola will be a premium ship, meaning aspiring commanders of this vessel will be able to obtain the vehicle by purchasing it in-game with Golden Eagles. Once obtained, captains will have the chance to earn more rewards for every action performed in combat. Furthermore, being also the first high tier premium vessel available to Italian captains, Pola will allow players to unlock vessels faster across all ranks of the Italian bluewater naval tree.

Pola will soon dock in player ports with the release of the next major War Thunder update, giving seasoned captains the opportunity to add another iconic Italian warship to their in-game collection. In the meantime, keep scanning the horizon for more news regarding the upcoming War Thunder “Hot Tracks” update. Until then, calm seas and good hunting captains!

Commenting is no longer available for this news
Rules
cheezymuffin
2

Okay so I guess you are going to fix the horrible accuracy of the main guns, give Italy a BB so research, and decompress naval so 4.7 destroyers aren't smakking 3.3 reserve destroyers out of the water, and massive battleships are no longer shooting at horrible outgunned light cruisers (or even destroyers?) Also, You could choose to give planes sepperate Naval BR's, so you can prevent Jets from just killing everything once even more advanced ships get implemented.

Couldn't care less about this anymore, you guys just killed off another aircraft by giving it 31k SL repair cost instead of balancing it normally as always. Pretty crappy when the Sk60B isn't even that good of a plane to begin with.

Great looking ship, really, it is. Shame nobody will buy it due to the lack of a decent naval gamemode. Maybe uhh give us back naval EC and we will pay back the cost it took you guys to make this, sound good gaijin? xD

the AA of some ships are so impossible to seem partisanery in the field for one or another nation.... in the reality when a destroyer can shot an airplane at 8km? I tell you... in dreams!!! not in ww2 for sure!! but gaijin is able to make some gamers (good chosen!!) became super snipers........ But the other gamers will became boycott the game for a good reason

gpacchia, Who asked about AA and destroyers?

40k repair cost when? And nerf to SL/RP rewards as classic move

should be on the 20th, just like last year

Poland or ... Anything pls!

ik this is a really off topic question but are any new maps in the works?