News
back to news
Development
18 September 2020

The Sd.Kfz.251/10 was a later variant of the well-known and widely used German WWII halftrack, equipped with a 3.7cm anti-tank cannon for increased firepower. Tankers will have the chance to add this special version of the Sd.Kfz.251 to their in-game arsenal by taking part in the upcoming crafting event “Strategist” in War Thunder!

Developed on the basis of the unarmored Sd.Kfz.11 halftrack, the Sd.Kfz.251 entered service with the Wehrmacht in 1939 and was intended as the primary transportation vehicle for the Panzergrenadier units of the German army. As such, the vehicle was intended to taxi troops into battle and protect them from small arms fire and shrapnel. By the end of the war, over 15,000 units of the Sd.Kfz.251 were built.

However, platoon leader vehicles received a special upgrade to their firepower in order to increase the effectiveness of fire support provided for advancing infantry. Namely, the standard machine gun mount was replaced by a turret housing a 3.7cm PaK anti-tank cannon. These versions, designated Sd.Kfz. 251/10, served with the Wehrmacht until 1944, by which time over 300 units were built. 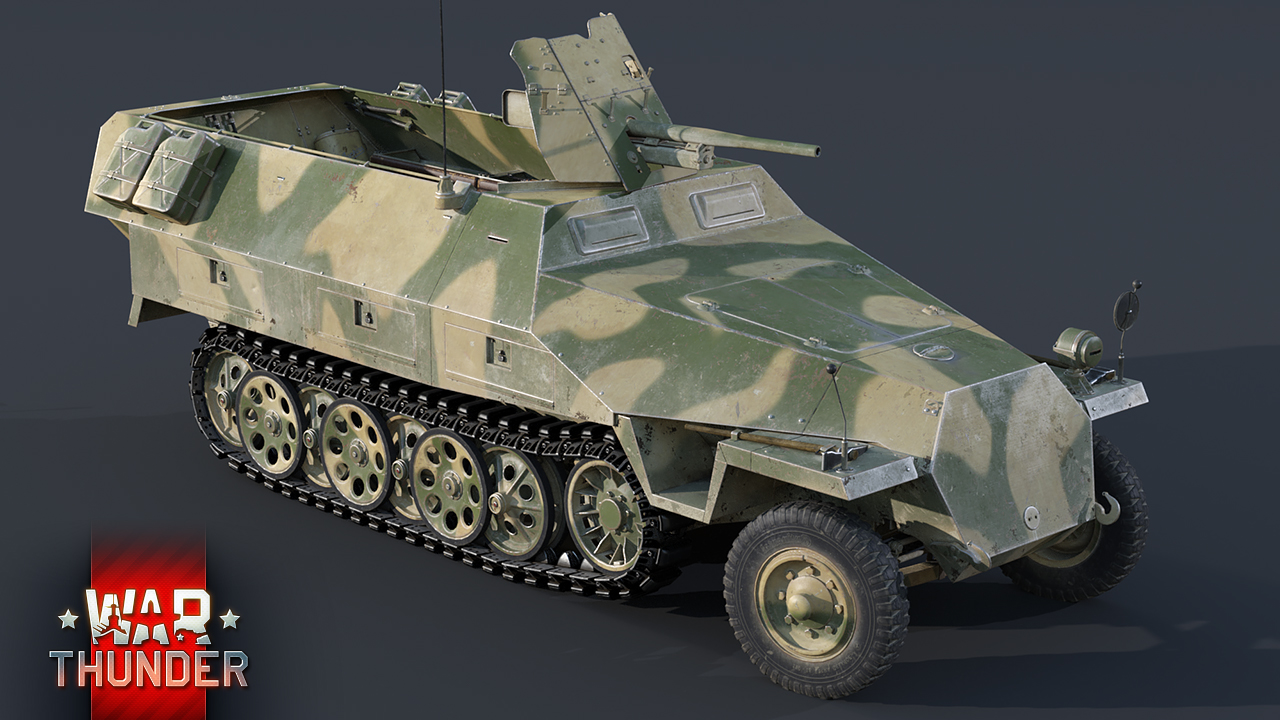 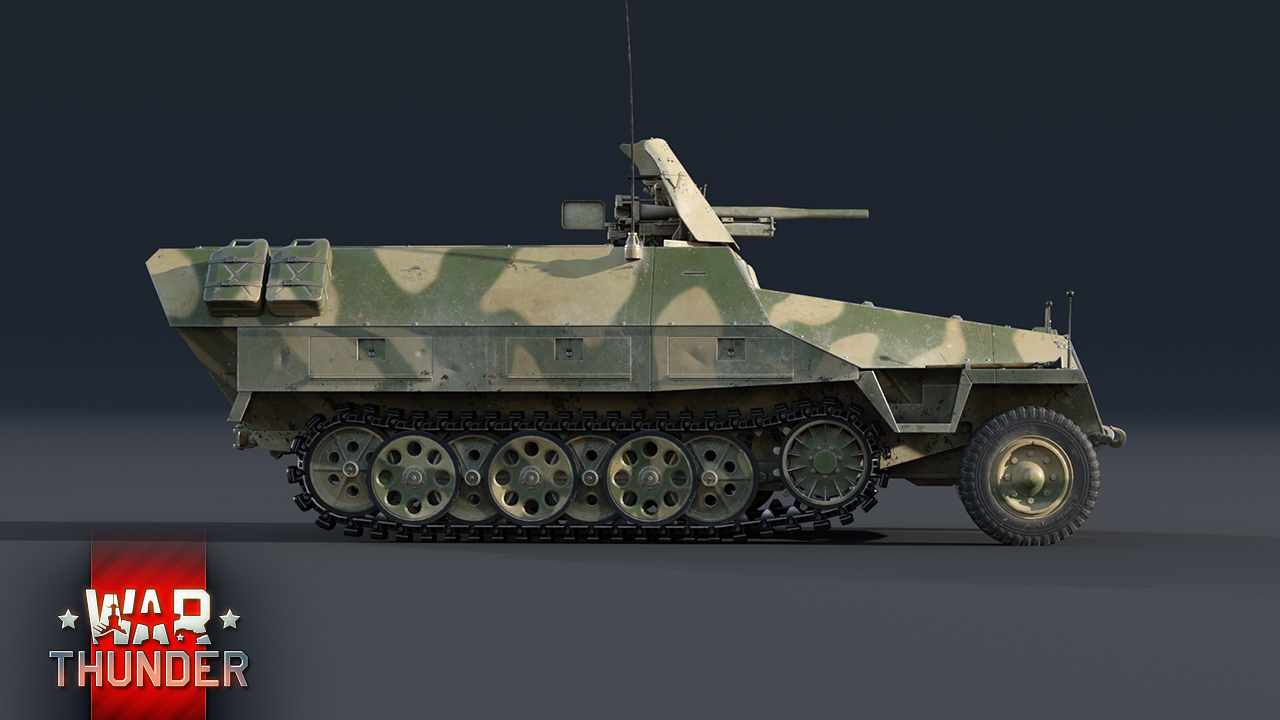 The Sd.Kfz.251/10 will be one of the prizes awaiting tankers who take part in the upcoming crafting event “Strategist”, starting soon in War Thunder. This infantry support version of the widely used German halftrack will mostly be seen in lower rank battles, where its decent mobility and quick-firing 37 mm anti-tank cannon are sure to cause some damage to the enemy lines.

However, while the Sd.Kfz.251/10 is well-protected against small arms fire and sharpnel with up to 14.5 mm of armor plating, it still remains vulnerable against dedicated anti-tank cannons as well as artillery fire and aircraft due to its open fighting compartment. Circumventing these drawbacks by simply changing positions frequently however will be more than enough to turn a seemingly harmless APC into a deadly low rank tank destroyer with some nifty premium bonuses!

Be sure to add the Sd.Kfz.251/10 to your collection of German armored fighting vehicles in War Thunder by taking part in the upcoming crafting event “Strategist”. Stay tuned to find out more and good hunting tankers!

Commenting is no longer available for this news
Rules
Rellik_pt
40

Some of those nations don't have the largest pool of vehicles for us to add, so when we do add something for an event vehicle for them the responses then tend to be "why are you making this an event vehicle and not in the main tree". Events generally are here to provide interesting vehicles that the majority of the community want to see. All of the nations on that list have had event vehicles in the past. But with every event, we must make decisions and try to choose wisely both to satisfy the largest number of players and the event itself to make it worthwhile.

Smin1080p, I love you I agree with you 100%. It seems like no matter what you guys do people are gonna complain, which I guess is true, just do what you guys feel is right but still take the time to listen to the community :)

There has got to be a psychological term for when someone gets something they immediately think only about getting something else even if they don't know what. This sort of mind is never satisfied, except in very fleeting bursts.

Drezworthy, Drez, it's called an unjustified sense of self entitlement....

I always wanted a 251 oin game, I just hope this event is easyer then the last though. Free time is a limited resource.

especially during this time of year

You utter fool German science is the world's finest.

Finally Sd.kfz.251 is coming with a 3.7cm gun. Then will you guys add 5cm cannon and 7.5cm(Both short barrel and Pak 40)cannon version of this? Or an AA variants of this?

Thats would be so nice

ok but when is bob semple premium coming :)

I could kill a...... Ummm.... Never mind. As a New Zealander I'd love to see the Bob Semple in game though. I would definitely play it.

Why as Event-Vehicle.... ..its the same Story as M8 Greyhound, Sdkfz 234/1 / Sdkfz 234/3 / Sdkfz 234/4. You simply prevent new players to get these iconic vehicles if they just miss the event - which also can scare them away from beginning playing the game in the first place.

Whilst it may be iconic, a vehicle such as this is not exactly new player friendly. Halftracks and in particular, tanks with limited firing archs are generally more suited to people with more experience in Ground Forces. There are over 1700 vehicles in game with plenty of iconic ones available to everyone :)

Smin1080p, Tanks that we aren't interested in, you mean.

I feel the same. All these premium vehicles that new players will never get. I joined after the FW189 and will NEVER get a chance to get it. My interest in this game is waning.

Will Japan EVER get an event tank?

At last !!! One of the most iconic WW II vehicles finally playable in WT. What is 8 years comparing to eternity ? :P

and available in a short period of time as an event reward. then again a wave of weird prototypes in the main tree

"Vous avez du à l'ail ?" Well, actually they used an american half-track that was mocked up to look like a german one (they also used M24 for german tanks) https://youtu.be/7UkCyOXPIvI

ALIEN109, lets just hope the gun is not stuck in a position :)