The project for an experimental turretless tank was started for development in Germany in the early 70’s as part of the replacement program for the Leopard 1. The unusual layout of the “casemate” tank type had several advantages: the possibility of installing two cannons at once, increased protection due to low silhouette and enhanced protection in the hull front profile and also increased mobility due to a reduced weight compared to traditional tanks. As part of this innovative project, two vehicles were built under the general name of  Versuchsträger (German: experimental platform). The first VT1-1 prototype was placed on a shortened chassis and was equipped with two 105mm rifled cannons with manual loading.

On the second VT1-2, two 120 mm calibre smoothbore cannons were used - the left cannon mounted with an automatic loader mechanism. Both of these prototypes used a number of parts and assemblies from the European “long-term production” experimental KPz-70. Since both vehicles were intended exclusively for the testing and development of new battle tactics, they were made from structural non-armour steel. Tests carried out by several NATO block countries, but they all left the project one by one and in 1985, Germany itself refused further development in favour of developing the Leopard 2 which was created according to a classic tank scheme.

In War Thunder, the twin-gunned VT1-2 will be located as a tank destroyer at rank VI in the German ground forces research tree. It is the first SPG in the game with two cannons, and as the cannons don’t have any conventional traverse - the cannons are rotated using the whole hull via the tracks. The VT1-2 “top” Rheinmetall L44 120 mm cannons are already well known to players. The choice of shells in the VT1-2 is the same as on the Leopard 2A4. From “stock” you will have DM12 HEATFS shell and after research you will be able to use two APFSDS shells with armour-piercing up to 410 mm! Both cannons have stabilizers in the vertical plane but the reload isn’t synchronized due to the left cannon having an automatic mechanism and will be reloaded a bit faster. The vehicle speed is 70 km/h and its relatively low weight allows it to accelerate and turn the hull pretty quickly. 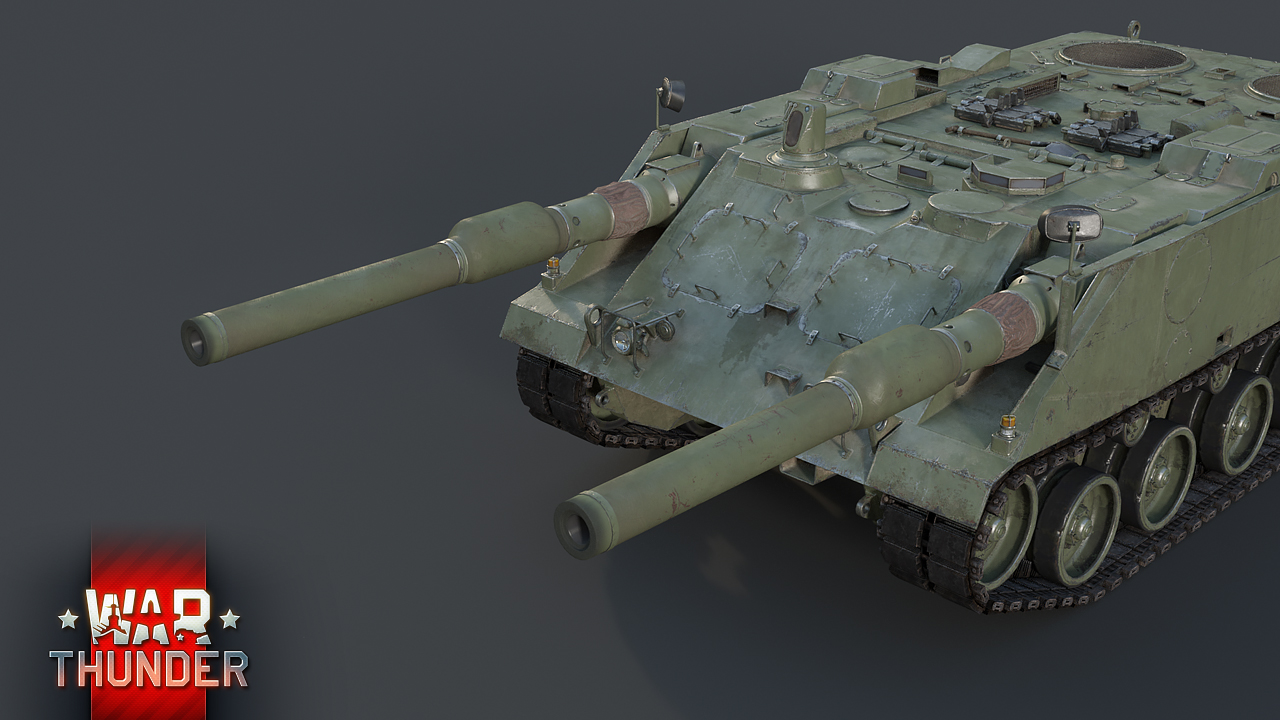 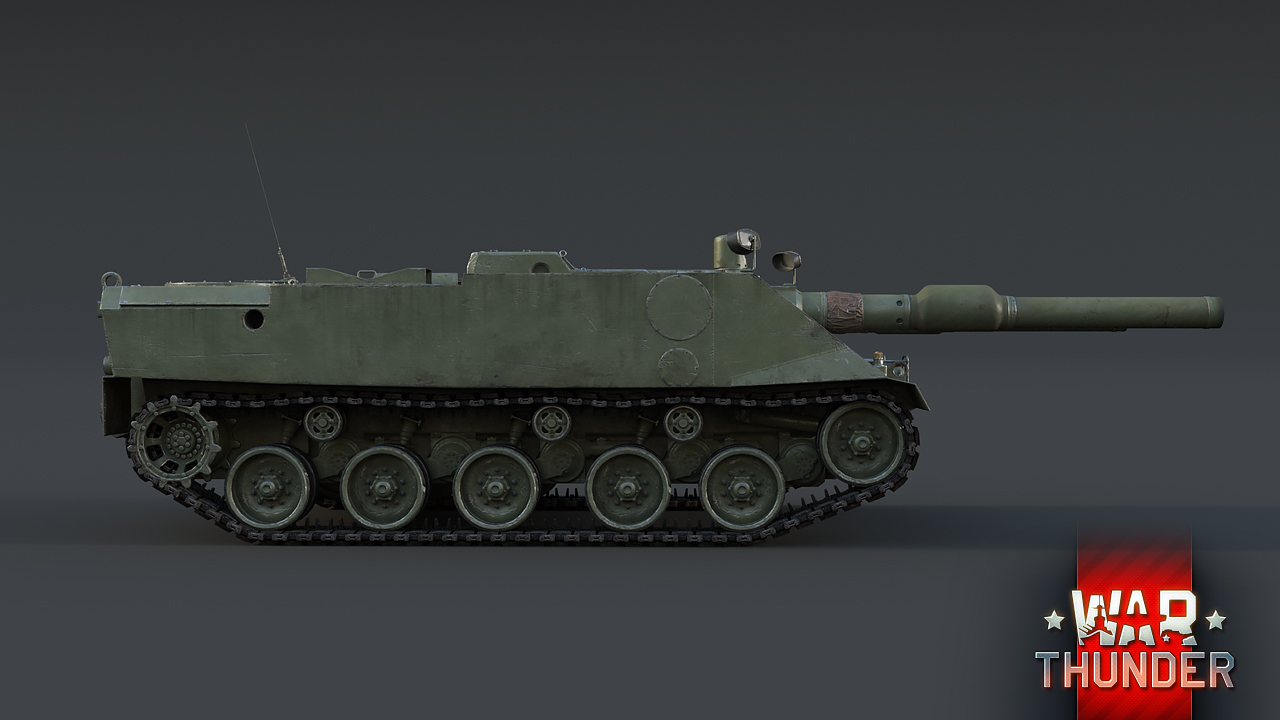 Currently, the VT1-2 is the most mobile ground vehicle in the game. The key to success on the VT1-2 will be the skilled use of its mobility. It would therefore be wiser to first research  the modules and crew skills which are responsible for mobility and turning. As was the case with the actual constructed prototype, the in-game version of the VT1-2 has been modeled without the use of armoured steel, so this “casemate” tank is not exactly capable of boasting the amount of protection it has. Both cannons are capable of firing at a distance of about 1,500 meters, so effective shots can be fired at both close and long ranges. Players are also easily able to aim and shoot with each cannon separately by switching between them, which is also effective given the cannon is among the best available in-game. In general, the VT1-2 might be considered one of the more unusual self-propelled artillery guns in the game, with a great potential to become the best in its vehicle class. It is definitely worth spending the time to get it!

Vehicles covered will be available in Operation “Shipyard” which we will discuss later.

Commenting is no longer available for this news
Rules
lawnDart
112

please gaijin, please dont make this like the battlefield engineer event. People have lives outside of war thunder, like school and sports. We all want this stuff but if its a grindy event we wont be able to get this stuff...

We have events throughout the year of differing levels and requirements to suit a range of peoples timeframes. This will be an additional new event on top of the traditional ones we have periodically.

Smin1080p, this basicly means, dear customer, not our problem but your welcome to spend real money / GE to get the vehicle, Good day

If you can't spend the time, chip in a dime.

PsykoFerret, You mean sell you soul and firstborn on the marketplace?

i dont believe it either, but unfortunately, they dont actually listen too awfully much to our concerns

the difference is this vehicle was actually built

TheMemeThunder, So was the Maus, you dolt...

Gaijin are you OK?

We are fine, how about yourself? :)

Smin1080p, Could be better, seeing as I really want this vehicle but won´t have the time to grind it ;(

What is this monstrosity?

This is the ideal tank destroyer. You may not like it but this is what peak performance looks like.

Ouiche, So I'm assuming people will be able to clip their cannons into walls letting them peak with it around corners without revealing more than a single gun and track?

Wow is it April 1st already?

nope, just german unity day, which means we get this absolutely epic vehicle that ive never heard of. I wonder if its OP

gunner324, I read about this thing years back. It was basically a next gen Kanonenjagdpanzer 4-5, but the germans realized Leopard 2 could do the same job almost as well, so project was cancelled and the prototype now sits in a museum

It must be I guess

So if I drive backwards I can shot and gain more speed, right?

You actually can, it's useful on vehicles that are slow to gain speed, such as the Maus

Nice ship, only 2 guns tho