The Semovente 105/25 M43 is one of the more advanced tank destroyers, built by Italy in the later stages of the war.

Soon, War Thunder tankers will have the chance to command the Semovente 105/25 M43 as they climb up the ranks of the highly anticipated Italian ground forces tree, coming to the game with update 1.85!

In mid-1942, the Italian Army put out a set of requirements for a new vehicle that could double up as both an infantry support vehicle as well as a tank destroyer, depending on the situation. In response to this, Fiat-Ansaldo and OTO both began developing prototypes around these requirements in parallel.

The two competing designs primarily differed in the chassis choice. OTO picked the newer chassis of the P40 heavy tank whilst Fiat-Ansaldo chose to opt for a newer and larger version of the chassis already in production for their Semovente M42.

This decision allowed Fiat-Ansaldo to complete their prototype much sooner. In February 1943, the Semovente 105/25 M43 was presented to military officials and was soon afterwards ordered into production, following successful trials.

Production began in April 1943, with a planned production run of over 800 vehicles. However, with Italy’s industry at this late stage of the war being severely crippled, production was slow and reaching such high production goals was more than unlikely.

Just prior to the signing of the armistice in September, the 30th vehicle rolled off the assembly line. The Semovente 105/25 M43 proved itself in combat during the defence of Rome, where the SPGs successfully engaged German forces trying to retake the city.

After the occupation of northern Italy by German forces, the Fiat-Ansaldo company restarted production of the Semovente 105/25, this time however, for the Germans. Germany only used a limited number of these vehicles under the designation Sturmgeschütz M43 mit 105/25 853(i), of which most were no longer in use by late 1944.

Around 120 Semovente 105/25 M43s were built by 1944, primarily serving with Italian or German forces. By the late stages of the war, only a limited number was still in service and after the end of WW2, the vehicle was retired from service. 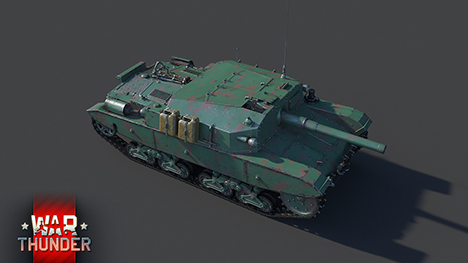 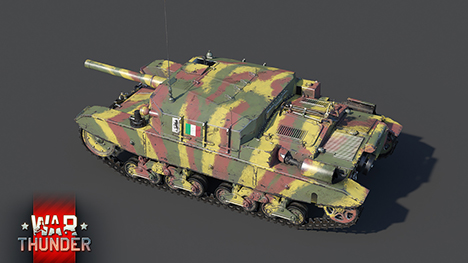 In War Thunder, the Semovente 105/25 M43 will await eager tankers at rank III of the upcoming Italian ground forces tree, arriving to the game as part of update 1.85. Reminiscent of the well-known German StuH, the Semovente 105/25 combines great firepower in a compact package, making for an effective tank destroyer at the lower ranks.

Armed with a large caliber 105mm cannon, the Semovente 105/25 represents a serious threat to its enemies at the third rank. However, as any low-velocity cannon, the 105mm on the Semovente will perform best at short-range engagements, offered by urban environments for example.

Although the ammunition choices might leave something to be desired in terms of penetrating power, they will most certainly make up for that in destructive power thanks to their large quantities of explosive filler. For more heavily armored targets, the Semovente 105/25 also has a HEAT round at its disposal, which is capable of dealing with even the most armored targets that the vehicle can face.

Fun fact : Due to the vehicle’s low silhouette and stretched looks, the Italians nicknamed the Semovente 105/25 “Bassotto”, meaning dachshund.

Clever positioning with the Semovente 105/25 will be of utmost importance for future commanders of this machine. Due to the fact that the 130 horsepower engine only allows the machine to reach a top speed of 38 km/h, players might want to avoid frequent repositioning and instead, take the time to get the machine into an advantageous position, where it can do the most good over a longer period of time.

Clever positioning however, isn’t only important to mitigate the vehicle’s low mobility, but also to make the most out if its armor protection. Being a casemate tank destroyer, the thickest portions of armor will be concentrated around the vehicle’s front. The Semovente, with its 75mm of frontal armor, is certainly capable of taking a couple shots, but it’s a much wiser choice to use the vehicle’s low silhouette to hide it behind cover in order to avoid getting shot in the first place.

The Semovente 105/25 M43 will be available to all testers at the third rank of the Italian ground forces tree, coming to War Thunder with the upcoming 1.85 update. We highly recommend giving it a try as there’s rarely something as satisfying as netting a single shot kill from a high caliber gun and the Semovente 105/25 will most certainly provide that to fans of Italian armor! Until then, happy hunting commanders!

Commenting is no longer available for this news
Rules
Spytsakiris30
1

Funny story, greeks used towels to stop that tank, force its crew out and then proceed to steal the tank

Fun fact your talking out your ass it wasn't developed until long after the Greeks surrender.

I'd be curious to see the full story there.

Hey Gaijin will Italy get the secret prototype pizza shells?

these tanks are great...

Bassotto is out. A nightmare for Brits and Yanks irl. Can't wait for it to be in-game too.

The first and devblog you won't find pastas asking for their sauce (italian tanks)...

So when is the CBT access? if I buy it now do I have CBT access now or I have to wait for the update?