During the last Operation S.U.M.M.E.R. event, we decided to experiment with new mission requirements which appealed to some, however there were players that wanted to see the summer marathon in the usual format. We will take all your feedback into account when preparing similar specials in the future, but we also want to ensure that this Summer leaves only good memories for all our players so we decided to launch another special with the good old terms! So here goes  “Good Old S.U.M.M.E.R.”! Everything familiar and simple: complete the tasks or purchase the “Marks of distinction” without additional conditions and get prizes!

This time the grand reward of the event will be the American FJ-4B VMF 232 jet fighter with a new type of weaponry for War Thunder - guided air to ground missiles. As well as this, you can expect many other prizes: The British Martlet Mk IV, unique camouflages and decals!

Tankers will not be forgotten either, but another 20 days of marathon might be way too much, that’s why you will need to complete just 2 days of tasks from 22 to get a small, but unique prize - the Sd.Kfz. 234/3 armoured vehicle.

More about the vehicles▼

In the summer of 1942, all production facilities of the American Grumman factory were preparing for the release of the latest F6F-3 deck fighters, but the Navy still needed the F4F-4 Wildcats for their ability to take off from a shorter deck. Production of the already tested in action F4F-4 was moved to another factory where the engineers made minor changes to the aircraft design and assigned a new designation - FM-1. Part of the aircraft in this series went via lend lease to Great Britain where the aircraft received its own name; the “Martlet” (a type of “swallow”). The Martlet Mk IV will be the first prize for participants of the summer marathon in War Thunder for pilots.

Our pilots are well aware and love perhaps the best in game deck attack aircraft, the FJ-4B. For the most persistent and purposeful participants of the War Thunder summer marathon for pilots we have prepared a special version equipped with guided AGM-12 missiles. These air-to-surface missiles have the ability to adjust the course of their flight which gives pilots the possibility of truly sniping shots at ground targets, tanks and ships. The FJ-4B VMF 232 carries five such missiles under the wings, as well as guidance equipment.

A new version of the super-popular German heavy armoured vehicle - the Sd.Kfz. 234 - only  available to Summer marathon participants! In the third modification of this vehicle with short 75 mm cannon that is installed in an open turret. It is the same cannon as mounted on the StuG and some versions of the German Pz IV. The fast armoured vehicle with an excellent for its BR  weapon - a great choice for arcade and combined ground vehicle battles at lower ranks! 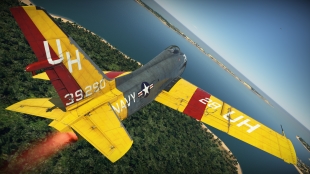 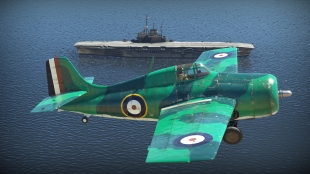 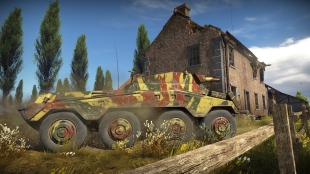 The tasks themselves will not be changed during the whole event and will be updated every two days at 11:00 GMT. You will be able to purchase missed tasks in the menu; “Achievements” → “S.U.M.M.E.R.”.

Item exchange in the Workshop

Item exchange in the Workshop▼

Especially for players that are collecting roundel decals from a range of Air Forces and also for players who are selling the coupons of the “Good Old S.U.M.M.E.R.” on the Market we have added the possibility to choose from the final prize of the event.

For 10 “Marks of distinction for pilots” you will receive the "Voucher for receiving the roundel decal from a range of Air Forces”, which you can exchange for the contents of one of the two chests:

We remind you can purchase the missed “Marks of distinction” in the achievement menu only till 11:00 GMT on the 6th of September. At the same time the possibility to exchange  “Emblem of the armoured troops” in the Workshop will be turned off.

Commenting is no longer available for this news
Rules
Wolf_89
170

Thx for a good old style of summer event.

Wait?!? No supporting fire tasks? THANK YOU SO MUCH! Hope that won't come back in the future. It's hard to find a squad mate that are able to hide the inside of a small barn. Let alone a tank! :) So again. Thank you! :)

I see, you guys learned. I love you again.

Don't confuse "learning" with "back-pedaling". I've still yet to find the 2 additional prizes for "pilots" from the above as I only counted 7 (9 prizes for pilots), unless the missing two are sekrit... )))

DodgerRoger, there's actually 9 you're missing 2, the random roundels from the camo of each plane

Contrary, myself and many gaming friends thought it was great: (1) good teamwork play for first achievements (2) Became familiar with and spaded dozens of tanks rarely used (3) made allot of extra GJN's in the market to buy future items (4) Ended the event with the kick-ass is7! Note: I much prefer the new event style, but Gaijin understands it might be to demanding to make 2 of them back to back so this new extra event is a bonus.

Maximus_007, I say make a 50/50 format with the lower rank vehicles attainable with pure task completion like previous op. summer events, and the higher rank vehicle needing assembly like the IS-7. But make it so you DON'T need to complete the first vehicle to start collecting parts for the 2nd vehicle. I liked the IS-7 way of doing things, but the sheer number of hours required is just impossible for many. It shouldn't just come down to how little real life responsibilities a player has.

WANT! TY Gaijin better prize is much easier to get!

They know this. Yet these prices took llittle to no time to make.

"fighter with guided air to ground missiles." wait what

Guided by the pilot, manually. Not automatically guided! It kinda work like an ATGM or a FritzX :)

Oh snap, Those are some deadly looking missiles Here we go again!

Do you have to do one task each day all tasks each day?(i cant figure out how to write a normal comment)