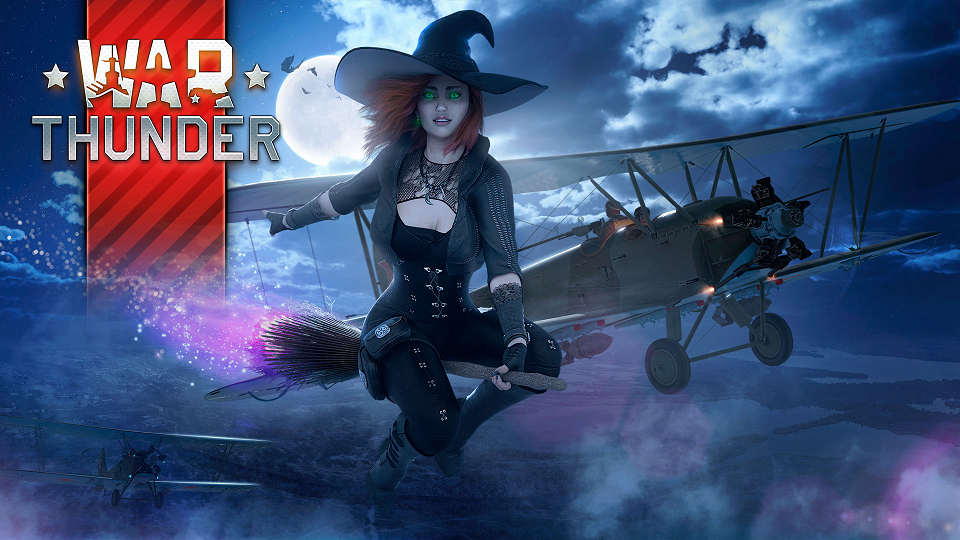 Take part in races in the air and on the ground, get “Witch's Cauldron” trophy with 3D Decorations and decals.

On “All Hallows eve”, diabolical beasties and spirits run amok, causing mischief and mayhem. Fight the good fight, defeat evil, see off the ghosts and the ghoulies, the witches and warlocks. War Thunder pilots and tankers will not stand idle while chaos reigns, grab some of the action and compete for the right to grab a souvenir chunk of Halloween.

Fly a special "Night Witch" aircraft! Get ahead of your rivals on a twisting track.

Achieve first place in the race to win the “Witches Cauldron” trophy in which you can get:

Drive an enchanted modification of the M18 “Hellcat” and be the first to reach the finish line. The races will take place only at night!. Oh, and watch out! Player hangars are also affected by the dark magic of Halloween.

Get first place in the race to win the “Witches Cauldron” trophy in which you can get:

When the races are over, the top 1000 pilots and top 1000 tank racers will get the unique Po-2 biplane

The winners have already received their Po-2's! You may check the final results here

Commenting is no longer available for this news
Rules
EnderPlasmicFire
27

Stona_WT, It's a quote from Sabaton - Night Witches in case you wounder ;)

Pushing on and on, their planes are going strong Air force's number one Somewhere down below they're looking for the foe Bomber's on a run

For_The_B4ntz, you can't hide, you can't move, just abide their attacks been proved (raiders in the dark)

Thulle_, make it easier to get it than being in the top 1000 or just bring it back in the tech tree

If you already have the Po-2 please don't play in the events. Give us a chance please! :)

But I want cool decorations and decals :'^(

Lentokone145, just play enough game to win the decoration and decal. but no more

I do, and I won't :) I think the decorations look too silly for my taste anyway.

well this is the normal Po 2 event, there was no other event to get this plane, only races iirc

OFW_Schroedinger, I remembered getting a po-2 without winning a race.

Can you stop people from breaking their gear off and suddenly becoming jets?

You saw it to huh? Pretty bad at this point.