The BMP-1 was the first vehicle of its kind. It was developed by the Soviet Union in the postwar period to fit a new take on existing combat doctrines, modernized for a new age of warfare. Tankers, keep your eyes peeled in the next major update, as this amphibious attacker may just be lurking in the seemingly unsuspecting pond next to you!

The BMP-1 was the first Soviet mass-produced infantry fighting vehicle (IFV), developed in the early 1960s which also marked the beginning of a whole new class of armoured vehicle. After the end of WW2, Soviet high command envisioned all potential future conflicts to involve chemical, nuclear and/or biological weapons. This meant that the armoured vehicles that would participate in such conflicts would have to be outfitted with specific equipment to protect their crews from nuclear blasts, radiation and other hazards caused by the usage of the aforementioned weapons of mass destruction. Starting as early as late models of the T-54/55, Soviet vehicles started to be equipped with such equipment. However, one type of combat vehicle was seen as particularly vulnerable, the APC. Vehicles like the BTR-152, ordinary armoured troop transports, were often open-topped vehicles with insufficient sealing to prevent the leaking of hazardous particles into the fighting compartment. The answer to this was the development of a hybrid vehicle that could perform both APC and light tank roles - the IFV.

The resulting design was the BMP-1. It was a fast, lightly armoured, amphibious IFV capable of transporting eight soldiers into battle alongside its three crew, whilst offering good protection against small arms and fragmentation. The BMP-1 was armed with a 73mm smoothbore gun, assisted by an autoloading mechanism, as well as an ATGM launcher on top of the cannon barrel, intended for taking out targets at long range. According to combat doctrine, the IFV unlike APC’s was designed not only to deploy troops on the battlefield, but also to support MBT’s and infantry in combat.

Around 20,000 BMP-1 units were manufactured in the USSR alone, between 1966-1982. Since its introduction in 1966, the BMP-1 has seen service with many countries over the world, including East Germany, Finland, China, Poland, Afghanistan and others. However, the service life of the BMP-1 has still not ended, as armies of some nations still actively use modernized versions of the BMP-1 to this day. 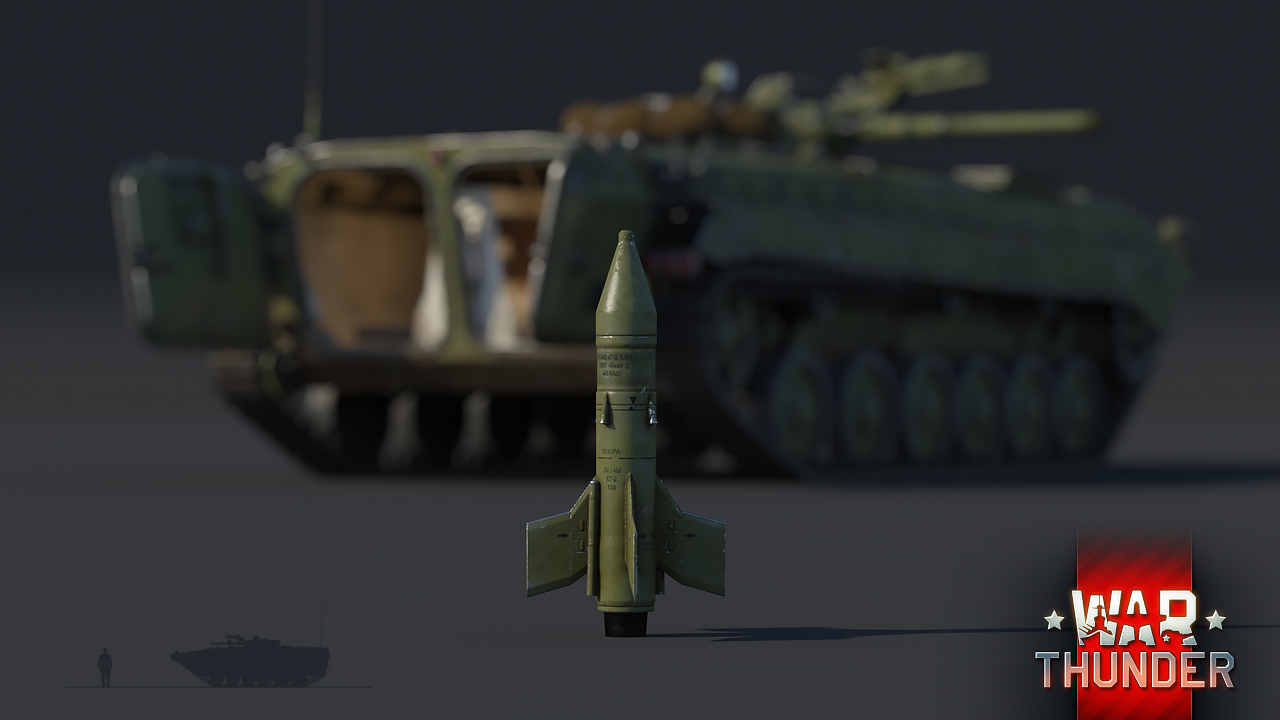 The BMP-1 will play a much bigger role on the battlefields of War Thunder. The BMP-1 will make good use of its excellent mobility and low silhouette to perform scouting and flanking maneuvers. Though the armour of the BMP-1 isn’t exceptional by any standards, with only 33mm of raw thickness at best, setting up the BMP-1 in a hulldown position will not only hide most of the hull from direct line of fire, but will also only expose the extremely angled upper glacis, that will more than likely cause shells to simply bounce off harmlessly. The arrangement of modules within the turret, which itself is a very small target, also helps with survivability, as the only vital modules and crew that are present there is the cannon and the gunner. Taking a hit there will, unlike with Soviet tanks of the WW2 era, unlikely lead to a complete incapacitation of the vehicle due to losing most of its crew.

Speaking of the cannon, the BMP-1 features the 73mm 2A28 Grom smoothbore cannon, which can fire standard HEAT-FS as well as High-explosive fragmentation shells with good penetration capabilities. However, when operating the cannon, tankers will be faced with two issues - low gun depression values and range restrictions. The 73mm cannon can only fire shells accurately up to a range of around 1,300 meters. To engage targets beyond that range, the BMP-1 is also equipped with a single ATGM launcher above the cannon barrel. The launcher can fire a total of four 9M14 Malyutka, first generation ATGMs, which can hit targets up to 3,000 meters away.

The BMP-1 will be a new addition to the higher ranks of the Soviet ground forces tree coming with War Thunder’s update 1.71!

Commenting is no longer available for this news
Rules
DebtlessWalnut
1

I don't think it needs to be said, but yeah this patch is the finial nail and then some on the beaten dead horse that is Armored Warfare. Now I must ask the glorious priests of the snail if we this means we will see more of this kind of stuff for when the French GF arrive into the game... yes, I really want to run wild with a 90mm gun on wheels. I miss those things from the other game ;n;

We will see in the future. For now, we cannot say anything related to future development.

It was a good game!

or add a mod for the flotation screen

Nomadic_Warrior, yeah as always people see only bad things in suggestions that are made in the wrong place