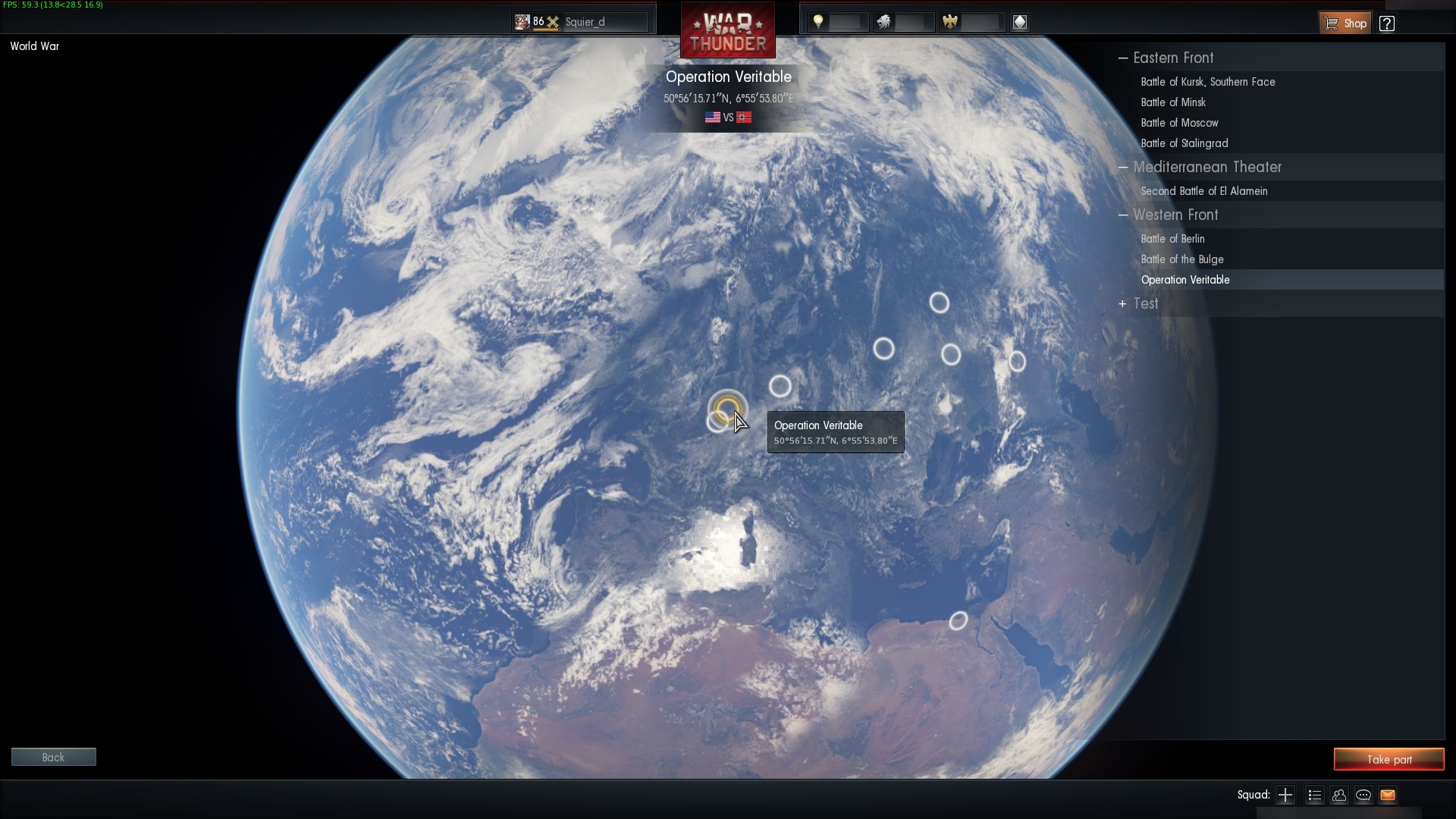 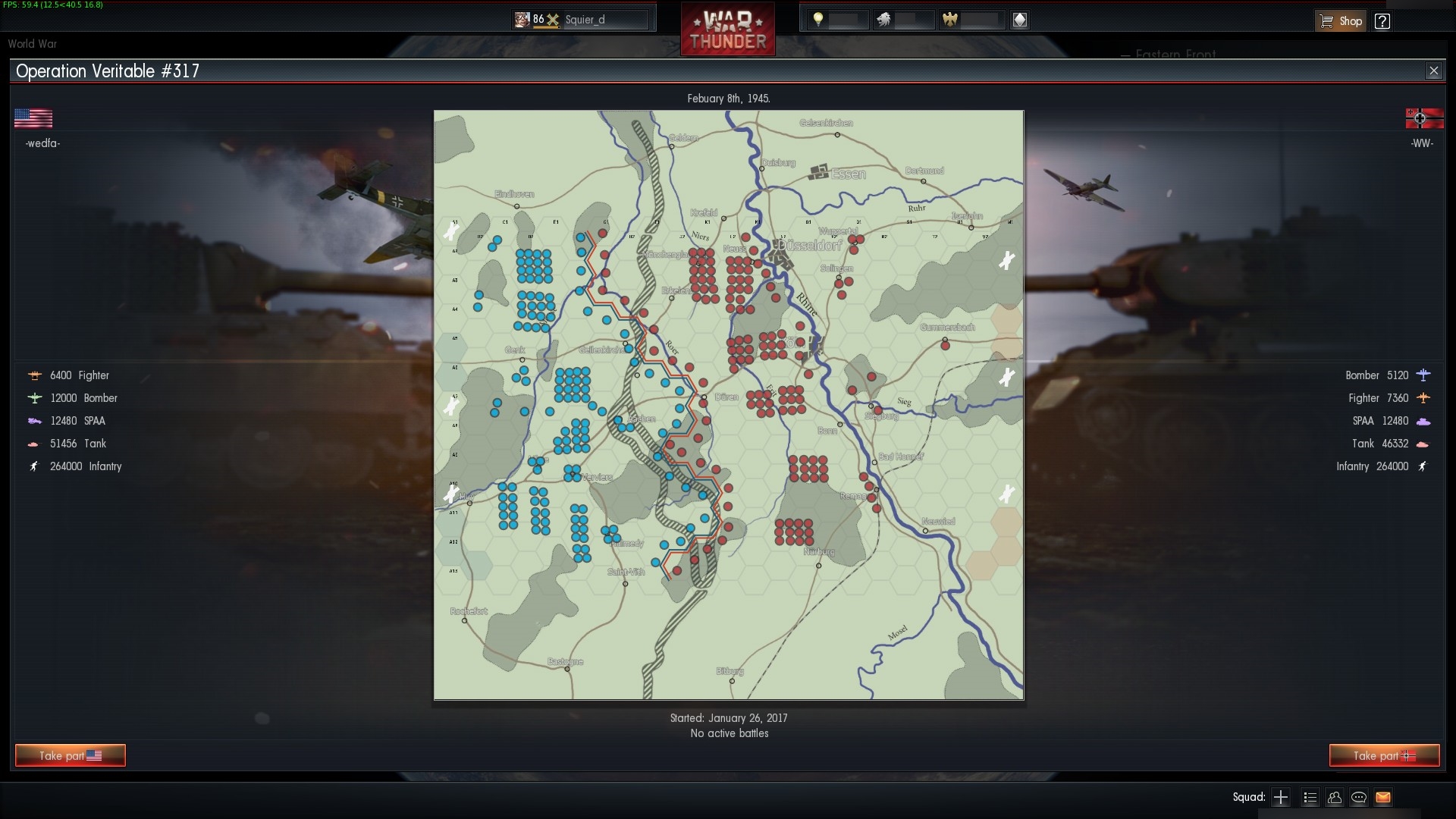 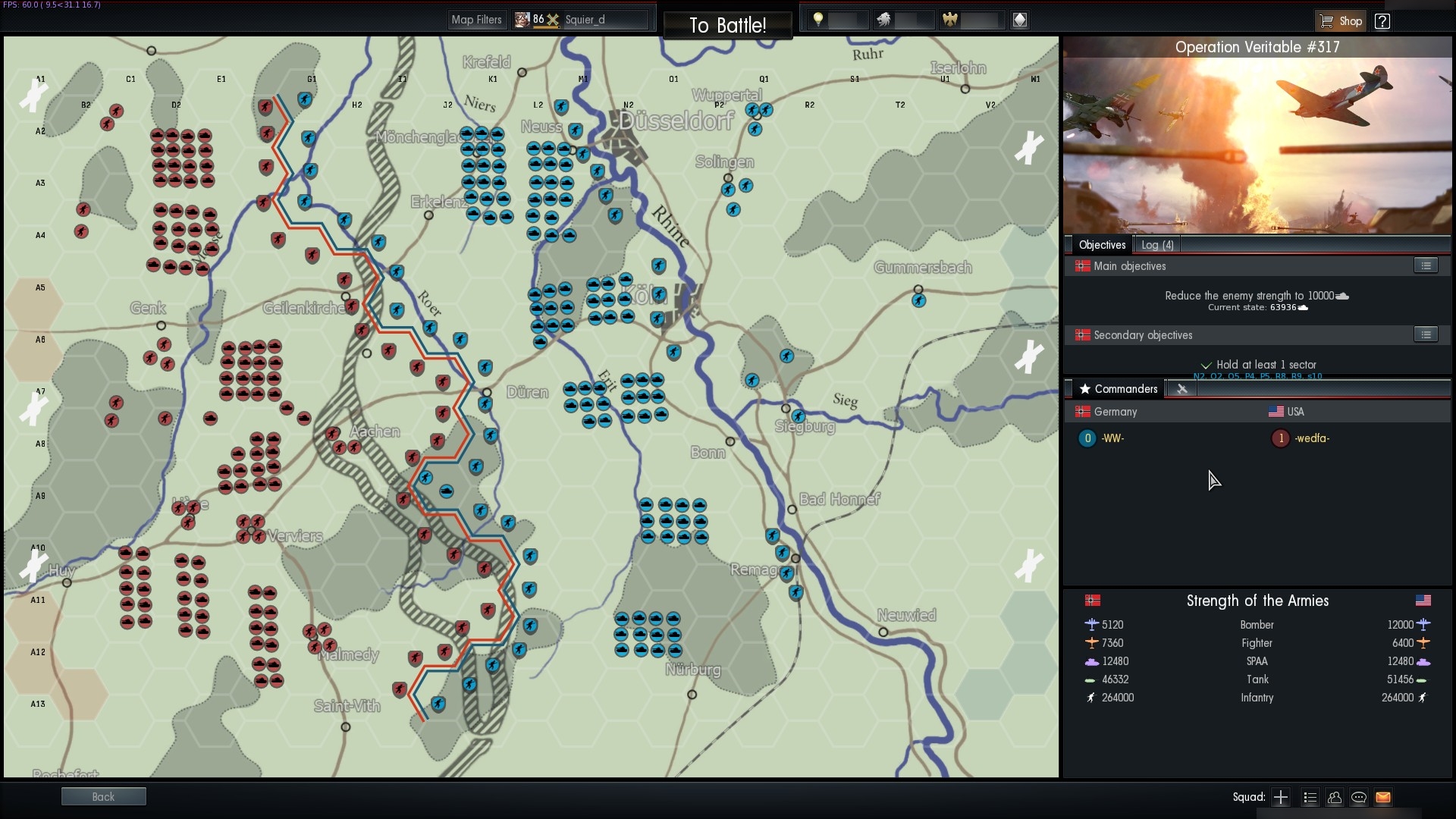 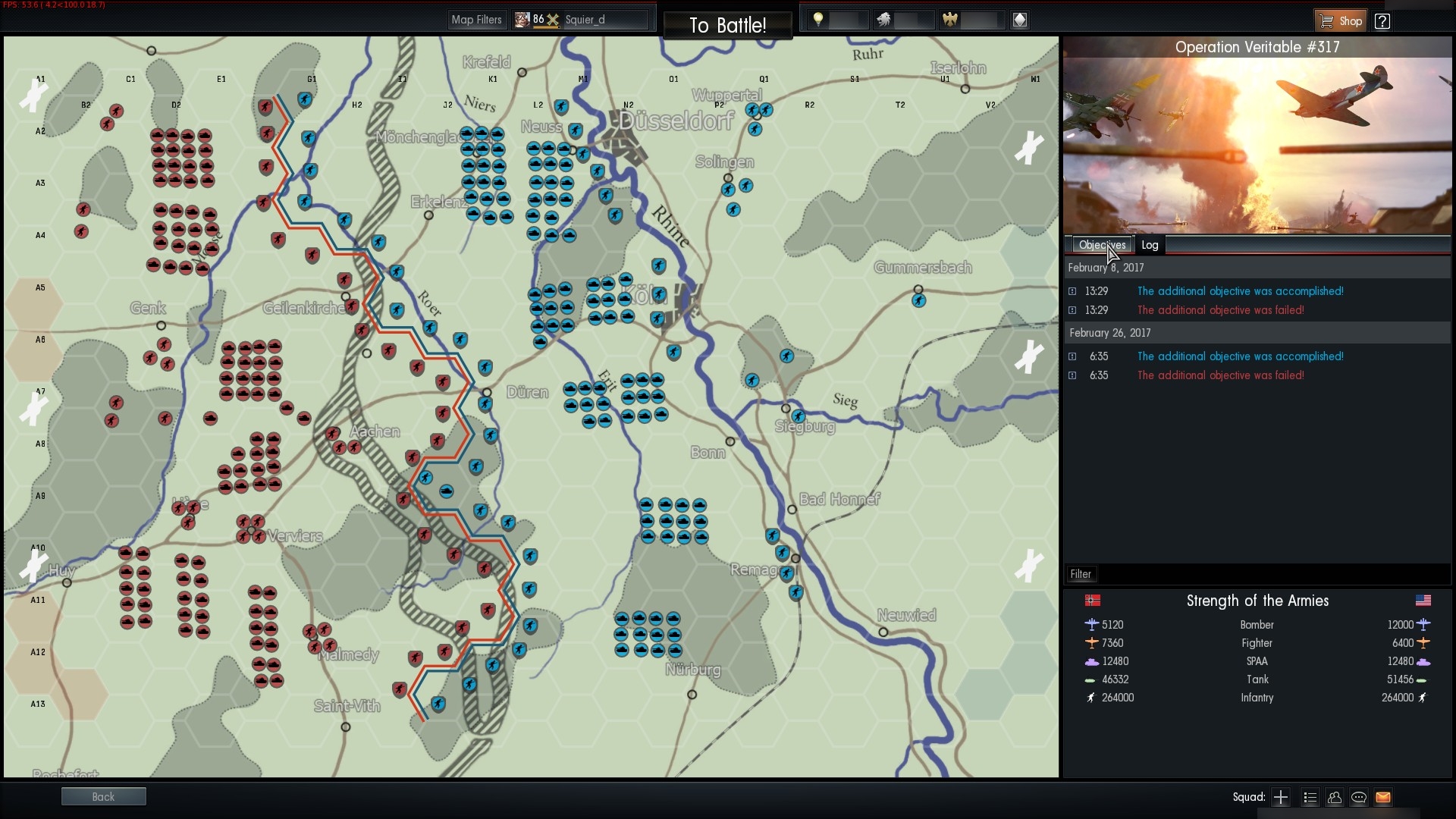 World War is a special mode where War Thunder squadrons go into battle to fight for world domination. Every action by every player – capturing a point in battle or destroying an opponent in a duel, every team victory or loss – will affect the situation on the World War map. Welcome to the live, constantly changing map of this global confrontation!

This is where squadrons have the chance to replay the most significant historical battles of the period and even alter the outcome. Each operation has strictly defined victory conditions for each side. Each side’s forces are divided into armies, which move across the strategic map, attacking the opponent and holding strategically important positions known as sectors. Victory in any operation depends on the concentrated efforts of the soldiers in the fights and the leaders in the strategic command.

Let’s take a closer look at each stage in World War mode.

Global map
Every player in War Thunder can get to the World War global map directly from their hangar. The map is an interactive globe with current military operations marked on it. All operations are divided by theatres, and each theatre can have several operations in progress at any given time. Click on a point on the globe to find out which game nations are participating in the corresponding operation. The full list of operations is displayed on the right – pick the one you want and head into battle!

Operation
Operations are a new feature for War Thunder that essentially offer a real-time strategy experience, a game within the game. This is where commanders move their armies across the map, planning offensives, organizing their defense, and managing their resources and reinforcements. In each operation, the opposing sides are divided into groups of armies, and each group is at the disposal of a specific regiment. The regiment leadership has various forces under their command – ground, air, artillery, and reinforcements.

The forces controlled by the army group commanders have a range of abilities that you must bear in mind in order to manage them effectively. First and foremost, each army has a predetermined number of vehicles, which you can see in the army’s pop-up hint. The type of vehicles is very important – this determines how fast your army moves, as well as specific special abilities, such as fortifying defenses to protect a sector, for example. If an army loses all of its vehicles in battle, the army is eliminated.

The battle begins when the forces of two opposing sides meet, and players can use their army’s vehicles to try to meet the mission objectives.

Battle
Battles in World War mode reflect the circumstances under which the armies clash – for example, an air raid, an assault on an entrenched army, etc. This is why we added several unique mission types to World War mode. In Convoy missions, players have to defend a column of AI vehicles against the opposing team, which can attack the convoy using air or ground forces. Defense missions are tank battles where one team must defend a strategic point against the enemy. In Anti-Air Defense missions, the aircraft of one team must bomb the fortifications of the other team, which must repel the raid using anti-air guns. Cover missions are bomber escort missions. Collision Course missions are like Cover missions, but with bombers on both sides. Air Supremacy missions will be familiar to War Thunder old-timers – air battles with a restricted capture zone.

Battles take place in a common mode – RB with markers. We made this decision because, logically, there can only be one world war happening at any one time, and so there should be only one mode available. Enemy vehicle markers aren’t visible across the entire map, but the detect-enemy function is higher than in classic RBs.

One of the most obvious differences in World War mode is its unique respawn system, which we have already tested a few times in Events. Each side has several types of vehicles, and the number and types of vehicles are determined by each army’s current resources. Players on each side are randomly assigned vehicles from the battle-specific selection, but only the types and quantities that the army has in possession for the current battle.

Make use of strategic opportunities on the operation map to gain the upper hand in battles, reduce your opponent’s numbers with each vehicle you destroy, and drive back the enemy with each victory – the outcome of some of the most important operations in the Second World War now depends on you!

The start of the “World War” mode we will announce separately. Follow the news!

Commenting is no longer available for this news
Rules
SnakeTheFox
134

"Battles take place in a common mode – RB with markers." Goddamnit. Markers RB is ***awful***. People rightfully complained about markers in standard RB until they were removed, why do they think it's a good idea to bring them back? You can all stay hyped if you want, but as interesting as all that was to read, my hype levels dropped to zero upon reading that. It's all back to "shoot-the-red-nametag-through-300-bushes RB", otherwise known as Diet Arcade. Screw that

It's a common mode for Squadron battles and tournaments, I also prefer no markers in Random battles, however this format is preferable for the WW mode. Anyway - it will be tested first, feedback gathered and only then we will implement this or that variant. Let's wait for tests first and see how it works ;)

Senio, Markers are not present in Squadron Battles. Its no markers there aswell.

There still are markers in air rb but not tank.

Alfredo_Potato, And I would actually play Air RB if there where no markers. Markers are horrid and the fact that the markers in WT are even more intrusive than in other sims makes them even worse.

I know this couldn't have been simulator with the minimal amount of people who play it... I'll have to keep going to squadron events for that, but RB with markers? surely no markers would be better, as in random battles. Especially in the air, or it's just arcade without stupid physics. This looks like it could be a great mode, introducing some really interesting co-op objective based missions, bombing etc, which I've always wanted from WT. But for the sake of skilled play, please no markers.

How you can know what will be better if you do not know how it will look like?

simulator would be the perfect mode if they allowed third person view and team position on mini map, that's all i would play. era/battle/tank specific etc

so...its clan wars. I'm no longer interested since its squadron only

Squadron Only :( Damn Lost Interest Agreed FAIL, Unless I am Reading this wrong

CmdrMrEverything, How would this work without squadrons?? What would the difference even be between WW mode and just random battles? There'd be like no context and no value to matches if you're solo...

Well, I read the article and though, "hmmm, looks interesting". Then re-read it and saw that it was for squadrons only and immediately lost interest.

Trailer came out in 2012 now its in development. GG Gaijub

Since 2012 we have had Soviet, German, American, British and Japanese Ground Forces, Naval Forces, several major game reworks and engine changes as well as countless other feature additions. We were always very clear that World War Mode would not be part of the official release content (1.65) and would come after release. World War Mode is one of the most complex additions to War Thunder. Its not something that was ever going to happen overnight.

So how will smaller squadrons fare? I wonder how it is gonna work out between the squadrons with only 10 friends vs those of 150 try-hards

this is so stupid, tactical commander(kr, cn, etc) or shattered galaxy(us) had freejoin world conflict and squadron events were only held every season for them only. the world war modes of an mmo should be free join by anyone, what's the point of calling it world war mode if you only allow squadrons to participate? might as well call it squadron battle deluxe

CmdrMrEverything, I can understand that, but then again the game is 15 v 15 in the modes most of the time, and 7 v 7 in the squadron battles. This should have been a hint that 5-6 would not cut it.