Mi-35: the Russian Hind
31 March 2017
Attention! This news was published on the old version of the website. There may be some problems with news display in specific browser versions. 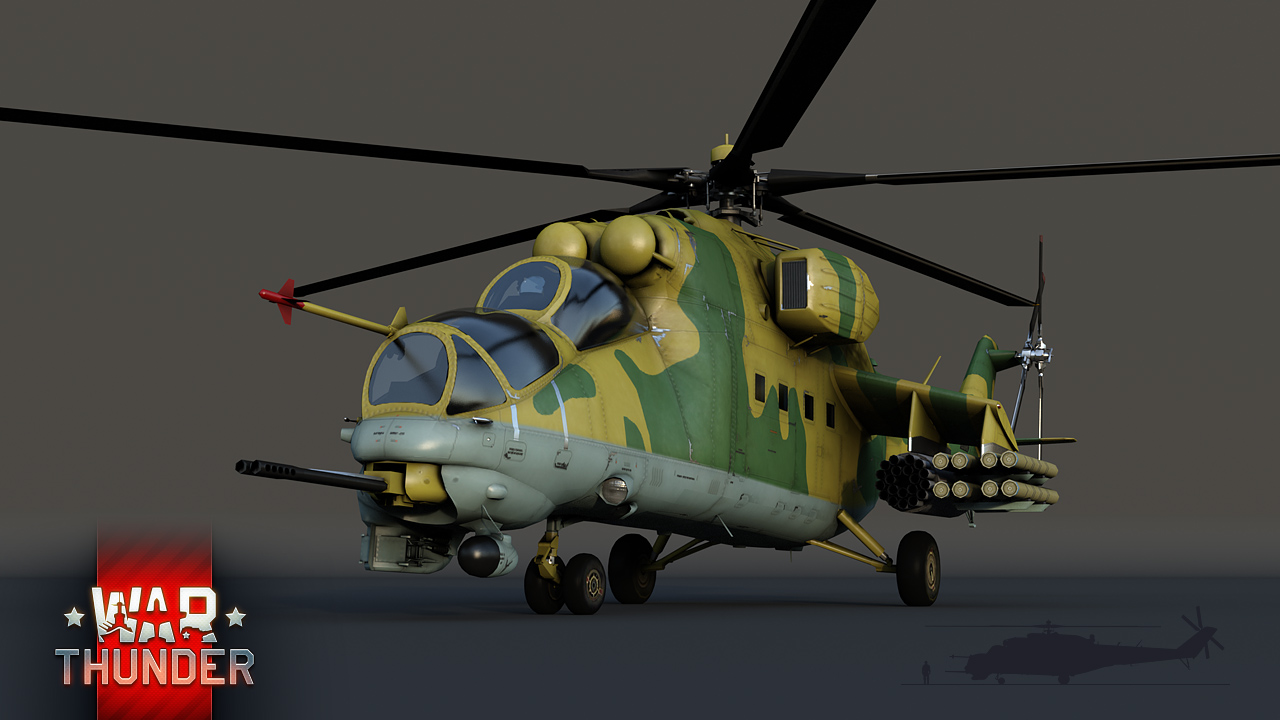 The Mi-35 helicopter closely resembles its predecessor, the legendary Mi-24. How much better is the Hind E? Find out in War Thunder!

The Russian Mi-35 multipurpose helicopter was the result of extensive modernization of the Mi-24 attack helicopters. Improvements to the good ol’ Mi-24 were designed to solve a number of issues, from enhancing its reliability and performance and expanding its latitudes to extending its flight time.

Russian engineers succeeded in creating an all-purpose attack helicopter that was not only suitable for deployment virtually anywhere on the planet, but was also capable of fulfilling a wide range of combat and transport functions. Interestingly, many of the Mi-35’s components are borrowed from the Mi-28 Night Hunter attack helicopter, which will also be flying War Thunder’s unfriendly skies.

The new and improved “Hind” will take its place at rank IX in the USSR/Russia multipurpose helicopter tech tree. While its new powertrain gives it a slightly higher speed than the Mi-24, it features fewer hard points for armament, which have been reduced from six to four. Players can choose a pair of unguided missile launchers and guided anti-tank missiles, an ideal combination for War Thunder’s mixed battles. The large-caliber machine gun in the nose of the early Mi-24s has been replaced by the menacing GSh-23 twin gun, complete with an ammo rack of 450 rounds. With these impressive flight and combat capabilities, the Mi-35 is a compelling alternative to modern attack helicopters such as the GM-64.

Commenting is no longer available for this news
Rules
Plakplak
44

Stona_WT, can you give me free GE Stona_WT. Also do you work on war thunder

It's too low poly for the game. They have a rule foe the number of edges (used in geometry of the 3D model) of a cannon or gun, based on its caliber. looking at the front guns, they're just extended hexagons; too low poly.

I hope its like the april fools for ships was.. Like its a test how the gameplay will play out and that they will add it later to the game..

That's exactly what I'm thinking with both of these devblogs so far. I want composites and ERA in the game for sure, personally. We need more hard counters to things like ATGMs as well as more variety for the game itself,

histotoxic, Please no... Not this stupid stuff, don't ask for game ruining things, don't be that guy...

I sexually identify as an attack helicopter and frankly I'm offended.

if this is a joke i'll kill myself

Stona_WT, Great, now look what you've done. Perhaps proper administration would result in releases that did not cause players to want to kill themselves, 'eh??

Good luck with that then

You better use this helicopter technology for non-joke purposes Gaijin...

Helicopters have no place in War Thunder mate... They cant be added, they are a slow target just waiting to be shot down and the only way it would be able to shoot a plane down is with rockets which are inaccurate, guns that would only face one way and slow to turn as you have to turn the whole vehicle or missiles which are not allowed. This is just a joke