Me 163 Komet - Pocket Rocket
20 October 2016 Profile
Attention! This news was published on the old version of the website. There may be some problems with news display in specific browser versions. 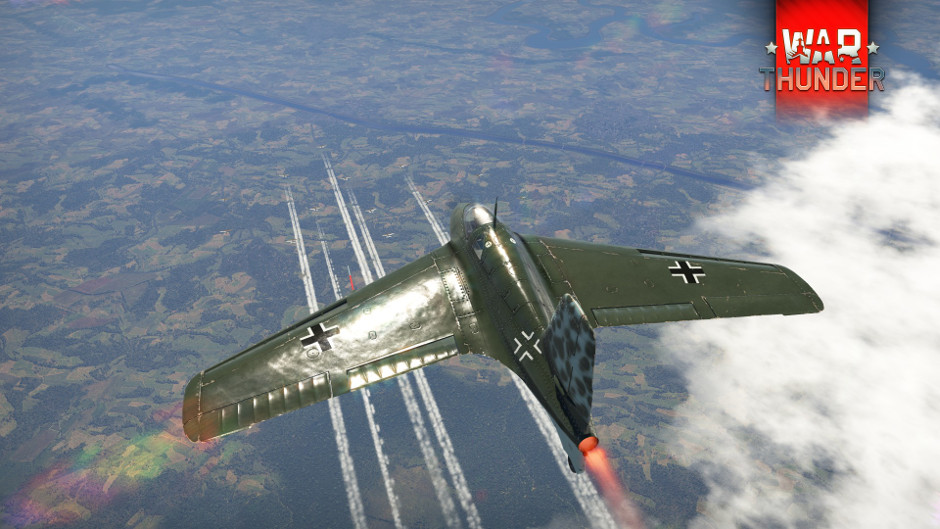 In July 1944 a tiny aircraft tore through the formation of B-17 bombers spitting fire.  The turrets could not turn fast enough, barely able to follow the streak with their eyes too. Although none of the B-17s were hit, the incident shook the bomber crews to the core, an enemy fighter that came out of nowhere, too fast to track and too small to aim at.  In later encounters P-51 fighter escorts also found themselves impotent against this little plane.  So advanced was this revolutionary fighter it could even best early jets, paralleling why War Thunder had to assign it a BR equivalent to Korean War era jets for combat equivalency!

The aptly named “Komet” (comet) was not an emergency fighter but a result of years of development, all the brainchild of one of the great aircraft pioneers, Dr. Alexander Lippisch.  Following the first world war he was employed with the Zeppelin Company, a prestigious company with leading aeronautical research. There he became interested in tailless aircraft and despite the Versailles Treaty restricted times experimented and developed many tail first (canards, French for “duck”) and tailless gliders.  In 1928 Fritz von Opel, son of the famous automotive manufacture and infamous for rocket powered vehicles wanted to make a rocket powered aircraft, and the Lippisch “Ente” (duck) was perfect. Although the Ente was destroyed on its second flight and Opel moved on to make his own design, the seed for rocket powered aircraft was planted in Lippisch.

By the late 1930’s the basic design of what would eventually become the Me 163 was taking shape. The engine that was eventually chosen was made by Hellmuth Walter Kommanditgesellschaft, maker of reliable RATO units. On 2 January 1939 Lippisch joined the Messerschmitt group with its much better manufacturing ability, completing the experimental aircraft.  With the successful experimental design test flights in the 1940 work progressed on the next version, the Me 163A - reusing an RLM airframe number from the canceled Bf 163 as a disguise - and first flew on 1 September 1941. The aircraft had phenomenal performance, but the cutting edge technology was highly unreliable and dangerous. It was not a priority project and it was another 2 years before the larger combat capable Me 163B was ready for action and a few months after that before it has its baptism of fire and history. 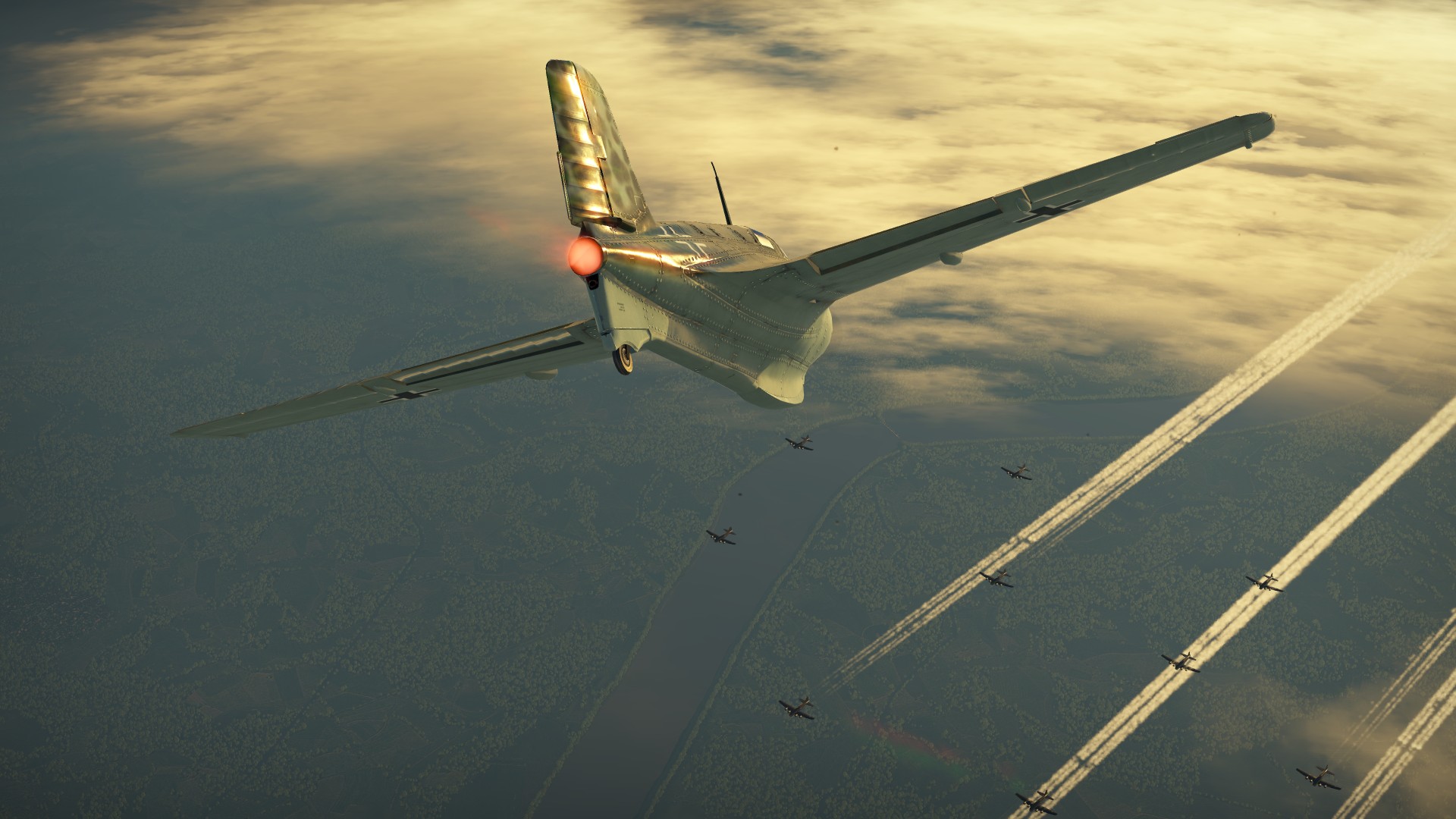 Even at BR 8, few jets can out run, out climb, or out turn the Komet, and fewer do all three.  Even the highest BR jet cannot treat this tiny terror lightly, lest it feasts on their blood!  Although hard to catch, it is not hard to kill; the very short 6 minute fuel supply is its achilles heel so if possible avoid the Komet until its fuel is spent for an easier kill.  Still, any disciplined Komet jockey can overcome its shortcomings, rocketing high above the map, cut throttle, and easily glide at a mind blowing 400 km/h to action.  Stay above 5000m for its best performance, unless all targets are lower, and perform vertical maneuvers to preserve precious energy. The craft is very sturdy and only the most extreme maneuvers can break the wings so push it. Conversely don't chase top jets, get alt, let them come to you (they will).  High closing speeds needs maxed out crews Keen Vision and G-Tolerance and majority of Awareness, and of course Expert qualification. For Mods unlock the 30mm ammo first and pick air loads, progress on rest as you wish.

When one slams the throttle from 0 to 100% the pilot is pushed back into seat, the actual pilots surely experience the same as they literally rocketed from 0 to 9000m (30,000ft) in as little as 2 minutes.  Forced to eat a strict diet to avoid intestinal gas and train on mountain tops, at least that is one historical detail players won't miss.  Intended for point intercept when everything worked just right it fulfilled its duty admirably, but those chances were rare and in the end with about a dozen kill credits it did not achieve its ambitious goals.

Although a failure as a fighter, the Komet was the most revolutionary aircraft ever and achieved many world records, including the first to exceed 1000 km/h and to reach its Critical Mach in level flight.  It inspired many experimental rocket aircraft in its wake, Ki-200, X-1, X-15, even the Space Shuttle are descendants of that little plane.  Dr. Lippisch also greatly contributed to flight, working for Convair post war developing his delta wing designs, this technology eventually resulting in the supersonic F-102, F-106, B-58, and inspiration for Concorde and shape of the Space Shuttle among dozens of others.  This tiny plane and its inventor literally changed the shape of aviation.

Commenting is no longer available for this news
Rules
Attetsuba
4

Can we please get the jettisonable wheels used on takeoff:3

*Afghan_TAXIMAN2, and what is wrong with that?

totally agree that it would be cool, however historically it was quite a difficult procedure to master. If you didn't jettison the trolley at the right height it could bounce back up hitting the aircraft and damaging it, igniting the full load of highly volatile fuel it used or catching on the skid which was lowered during takeoff to add a suspension element to the trolley. so if implemented in the game it would likely be with a large amount of instructor assistance.

Neat little aeronautical design and a great read! More unknown combatants history and vehicle profiles please?!!! Can't say enough how much these articles featuring research tech tips and gameplay pros and cons are solid gold for every thunder'er out there from the most welcome here 'Noob' to the 'smells like roses' lvl 100 Nerfherders... cheers! o7

We plan to keep doing historical article like this one in the future (probably 1 a week).

Ouiche, Do people request these or you guys (As in the mangers) do them?

Nice article but why was it a failure as a fighter?

The plane was known to leak fuel... and the fuel was known to be toxic, corrosive, and to burn or even explode in contact with organic material like the flight suit or the pilot. Also, it was a defensive weapon made for a very specific task with no room for anything else (shooting down bombers close the plane airfield), and it was probably too narrow to be really effective.

it was because of its small fuel supply as well has if it took even minor damage it would b nearly impossible to fly back to base, and don't get me started if it gets a fuel leak............

This sounds like a pretty good plane. The high speed, good guns and small size make it ideal for dogfights. Hopefully, this German Jet is pretty weak and vulnerable with its fuel and armour, or else this would be overpowered

Make it ideal for dogfights, yes but no, the guns are powerful, but slow in rate of fire and velocity, so hitting moving targets can be quite a challenge.

LunarRainbow, True, Mk108s require some skill to be tamed. The power is the least of our concern, but the muzzle velocity make the gun hard to use against fighters. They were made to destroy slow moving bombers after all.

It's already in game

"difficult to land", I think you mean previously broken, fixed then some how broken again so that wings explode after you stop.