B-17 Flying Fortress
9 August 2016 Profile
Attention! This news was published on the old version of the website. There may be some problems with news display in specific browser versions. 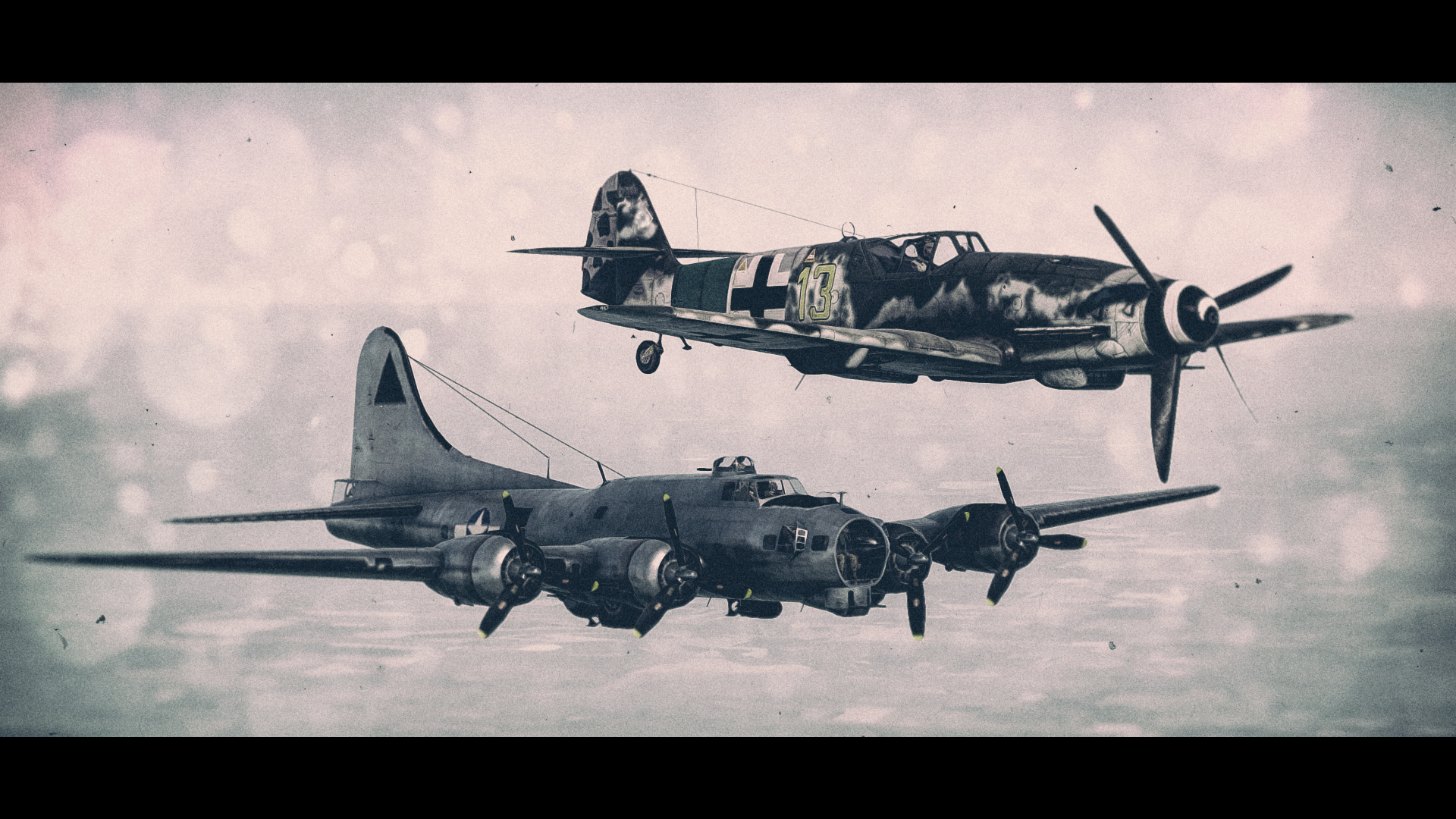 "I didn't have the heart to finish those brave men, I flew beside them for a long time.
They were trying desperately to get home, and I was going to let them do that. I could not have shot at them." - Franz Stigler

The legend of the B-17 is so awe inspiring this pitiful little tithing is almost an insult.  Likely the most iconic warplane of the war, let alone American warplane, it’s legendary for shrugging off blows that would vaporize lesser aircraft and retaliating ten fold, something many players could relate to.  The truth is much more sobering but the genesis of this myth was still founded in reality.

The B-17’s earliest roots started in mid 1933 as “Project A”, an USAAC engineering study for a large bomber with 5000 mile (8050 km) range, soon called the XB-15 (X for eXperimental).  Subsequently in April 1933 an order to build one was issued, becoming the Boeing Model 294.  In August of that same year the USAAC was looking for proposals to replace the ageing Martin B-10, so Boeing presented a smaller version of its 294, the Model 299, the future B-17.

The Model 299 was built at Boeing's own expense however it borrowed heavily from design work done on the 294/XB-15 and earlier Model 247 high speed passenger airliner.  Construction progressed swiftly and on 28 July 1935 the prototype flew for first time (meanwhile significant engineering challenges delayed the massive XB-15 till 15 October 1937, also called XBLR-1 for Bomber, Long Range).

Big aircraft were rare in 1935 and while certainly not the biggest it still made a huge impression.  Upon seeing the large aircraft with the (then astonishing) total of 5 machine guns pointing in every direction a Seattle Times reporter called it a “Flying Fortress”;  seizing on the marketing opportunity Boeing had the term trademarked! The USAAC was ecstatic at its 252 MPH (406 km/h) cruise speed and the future look bright for Boeing, but disaster struck on 30 October 1935 when a simple oversight caused the only prototype to crash killing the pilots; the bomber contract went to the Douglas B-18 and Boeing's future was in jeopardy! 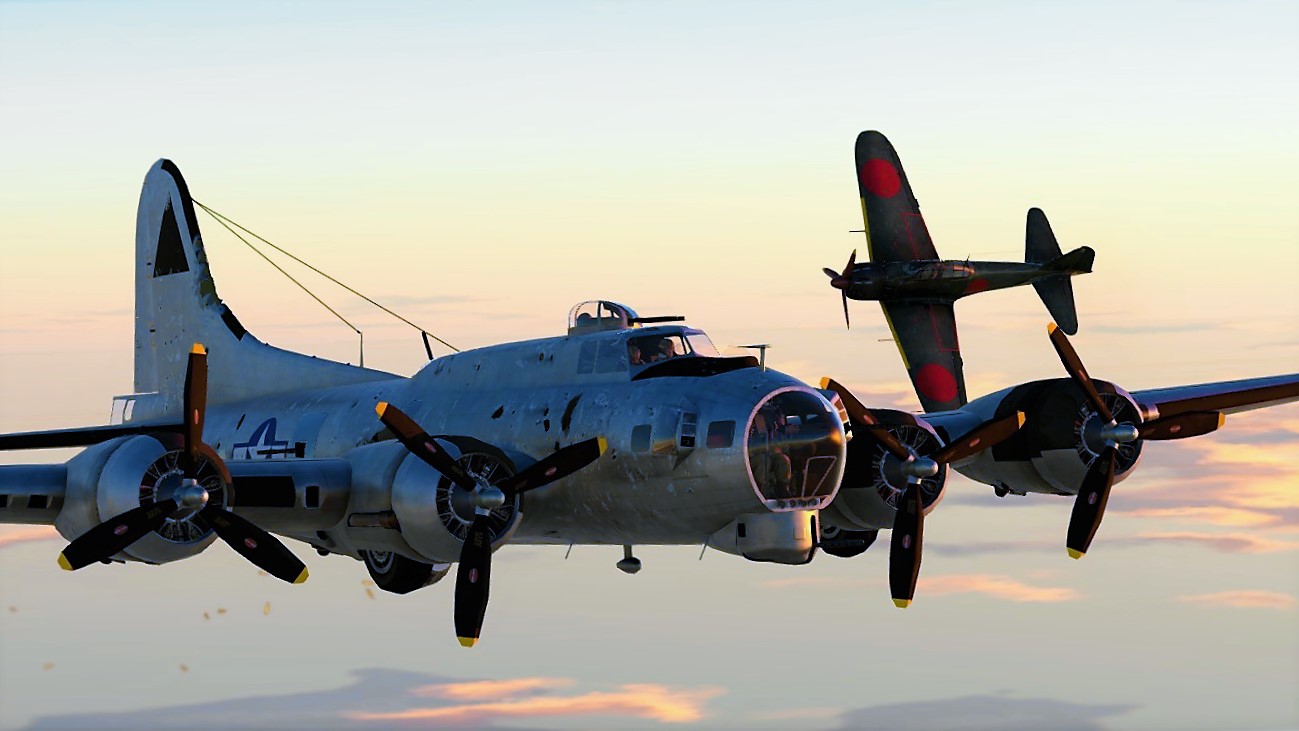 User-made screenshot made by Nagatoo_BF

Fortunately in its short lifespan the 299 gained many supporters and the USAAC staff was able to approve a contract for 13x “YB-17”, blessing the model with a military designation. It was a double blessing as Boeing could afford to do a significant rework of the design and greatly improve its performance.  To prevent future accidents use of a checklist became required operating procedure and is now used for all flight operations today. The final and important piece to the Flying Fortress story was the RAF; desperate for a heavy bomber in early 1941 they received 20 of the B-17C “Fortress Mk I”. Already 5 years old the B-17 was showing its age against the lastest cannon armed fighters and combat results were disappointing, but Boeing closely followed the exploits and opinions applying the lessons for its last major redesign, the B-17E.  Now bristling with 9 or more 50 caliber (12.7mm) machine guns, some in British inspired powered turrets, and other cutting edge technology it entered production just in time for America's entry into the war.

Just like the RAF experience, the Fortress could no longer outrun enemy fighters relying on defensive firepower, the same as in game. With a BR at 5.3 and up the attackers will be formidable but the Fortress was built extremely rugged so able to absorb heavy damage, but retaliation is key for survival.Upgrading “Weaponry” is vital, but it is deviously locked behind many other modules!  A recommended path is Vest > Radiator (need power) > LBC-17 > Compressor > Turret 12mm > the remaining “Weaponry” (save 7.62mm as last module).

The crew is what makes a Fortress, it is critical is to recruit at least 6 gunners and train them to at least 2 bars on all 5 parameters.  Finally pay for Expert (in SL), even Ace (in GE) crew qualification to get that big bonus. Also mainly upgrade Weapon Maintenance in Ground Service tab, the least important is Pilot for this lumbering bomber.  This will greatly improve the quality of the gunners allowing effective AI engagement when one cannot take them over manually.  This is especially useful when swarmed where AI is much better at engaging multiple targets.

Visit official War Thunder wiki for more information about B-17 E and B-17 G.

Out of 12,731 built about 2/3 were lost in combat and accidents.  Of the some 4000 left only 46 exist today, 12 of which are flying.  It is well worth the effort to go see this legend of they sky, and marvel at the brave men who flew in exceedingly hostile skies and environments, and be surprised how small it is!

Commenting is no longer available for this news
Rules
Andarta
9

I love it too, I would like to see more of these in the WT community, where true heroes just try to save injured men on the battlefield.... Imagine what could have happened to Franz Stigler if it's superiors would found out.... Not many of them would agree to this behavior.

do a profile on the TU-4

Tu-4 profile is currently not planned, sorry bud. Take a look at the B-29 profile that was published during the January https://warthunder.com/en/news/3507/current/

I just got to fly in one a month ago. The "Yankee Lady" B-17G. It was an amazing, and humbling experience of a lifetime, and really made me feel inspired about what our soldiers had to face in WW2.

The user video was simply amazing. Bravo! Nice use of some Memphis Belle audio too!

Great story. I read the book written about this incident , "A Higher Call"...good read.