Developers' Diaries: Ground Forces Damage Model [Part 1]
24 December 2013
Attention! This news was published on the old version of the website. There may be some problems with news display in specific browser versions.

To make aircraft gameplay feels like real, it’s important to have true physics of the flight-model and realistic controls. To make tank gameplay feels like real, it is most important to have true physics of the damage model. That’s why we start to reveal details of the tank gameplay in War Thunder from the tank damage model (or DM). To destroy the ground force unit, you have to hit vital components or crew. Armour prevents instant damage to internal components, until it could resist the power of a shell.Ground Forces Damage Model  has the same principles as aircraft DM. Machine is destroyed when key modules or crew members are hit. If armor is hit it will hardly ever destroy the unit. 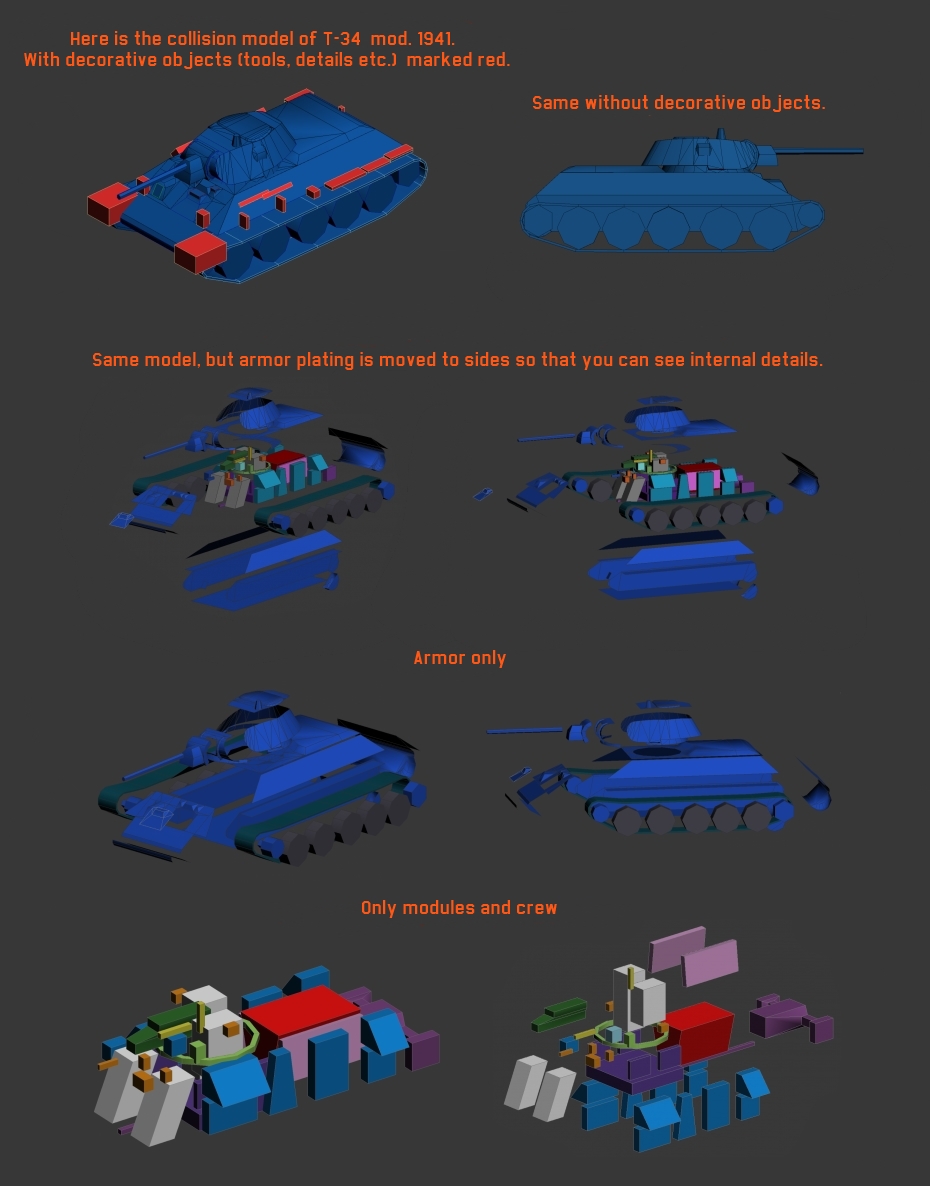 All armor plates have correct constructive angle of slope and repeat the geometry of the visual model. If several plates had same thickness they can be modeled as one armor group (front and rear turret armor in the given example). Each armor group has its own characteristics (thickness, material, structural strength value )  but all armor is modeled in such a way that it requires high number of penetrations (several dozens or even hundreds) to be completely destroyed. After that the plate will not be taken into account in the DM but usually such number of penetrations will cause destruction of the tank anyway.

Currently all armor has one material - analogue to rolled homogeneous armor  - RHA.

Internal modules simulate all significant machine parts of the tank, their destruction causes the destruction the machine.

Currently tank can be destroyed if :

Ammo rack is destroyed - it can be destroyed by several hits or one hit with a very high damage - usually it means that the shell sill has high penetration capacity after penetrating the armor. In this case there is a high chance of ammo rack explosion - 90% and more.

fuel tank is destroyed - the conditions are same as above, also fire is possible if the hit brought less damage fire also causes destruction of the tank.

Engine destroyed - the terms are the same, but explosion is not possible, only fire may occur

Besides that there are several conditions when several important modules are destroyed.:

For running gear only tracks are critical, when they are destroyed  tank remains immobile for a period of time.

Also there are certain penalties  when following modules or crew  members are damaged.

We’re sure, that this info was interesting to read even for those players, who prefer aircrafts. Soon we will publish another issue of the Tank Diaries - we have tons of interesting facts to tell!