Supermarine Seafire FR 47
19 August 2015 Vehicle Profile
Attention! This news was published on the old version of the website. There may be some problems with news display in specific browser versions.

The Seafire FR 47. Notice its contra-rotating propeller, a beautiful and unique sight indeed!

The Seafire FR 47 is the last, ultimate Seafire/Spitfire design. The FR 47 is ranked as a high Tier IV vehicle. With its distinctive contra-rotating propeller, this aircraft has a great rate of acceleration and climb rate, at 18.5 metres per second. The Seafire also boasts an impressive top speed for a piston powered fighter, clocking in at nearly 699kph (434mph). All of these factors, combined with its 4 x 20mm Hispano cannon armament, make this naval fighter very difficult for other fighters to contend with.

The Seafire FR 47 handles a lot like its RAF sister, the Spitfire, boasting considerable turn fighting capabilities. In game, it has a turn time of just 21 seconds to complete a full turn, which allows it to easily slide right in behind enemy pilots who do not have their heads on a swivel. The Seafire is best used in an energy and turn fighting capacity; climbing to gain altitude and diving to attack is the best route of action. However, if your enemy makes the mistake of attempting to engage in a turn fight, then they will be the one to end up having a bad day.

The design of the Seafire series began in late 1941 when the Fleet Air Arm (FAA) wanted to test a possible conversion of the land based Spitfire into a carrier based fighter. The first production Seafire was developed from the Spitfire Mk.V and was considered to be an immediate success; however modifications were clearly needed. The most important modification was the landing gear and the tail hook - the Spitfire landing gear was very narrow and during the Seafire’s development cycle this was widened for greater stability during deck landings. The tail hook assembly also put a lot of stress on the fuselage and this required strengthening. Thus, with the addition of an arrestor hook and strengthening to the fuselage and wing surfaces above the undercarriage, a ballast weight was then required in the nose section. These factors, as well as the addition of a naval radio, resulted in the Seafire being noticeably heavier than the Spitfire.

Several more modifications were made over time, but all of this work culminated into the ultimate Seafire: the Seafire FR 47. The FR 47 possessed folding wings and wing tips to allow for easy storage beneath a carrier’s deck, and also had the very distinctive contra-rotating propellers which produced more thrust and eliminated torque reaction in all phases of flight. The Seafire was used primarily as a Fleet defence fighter for the Royal Navy due to its incredible performance and comparatively short range, but early in the Korean War it did see action as a ground attack aircraft.

In total, only 90 Seafire FR 47’s were built prior to being withdrawn from front-line service in 1951, after the FAA moved its focus towards Jet-engined aircraft.

In one of the following Updates, we will include decal from the no. 887 Naval Air Squadron 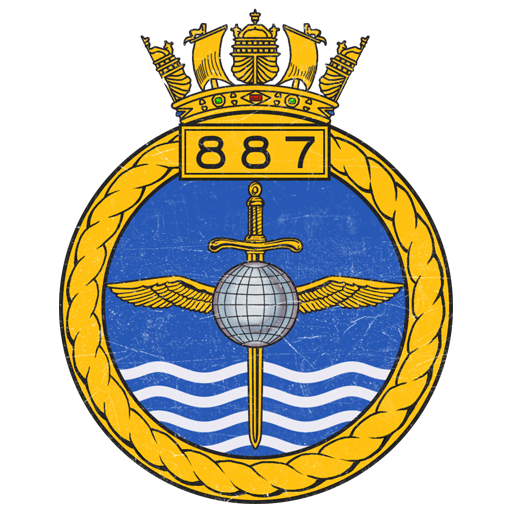 Tell us about your experience with the Supermarine Seafire FR 47
in the comments!