The legendary self-propelled assault gun with high-caliber rockets was designed to destroy whole buildings during urban fights! The Sturmtiger comes to War Thunder!

The project for a self-propelled 380mm self-propelled rocket mortar on the Tiger tank chassis was presented at a German armaments meeting in August 1943, followed by a building of a mockup prototype to present to Adolf Hitler. The mass production of the vehicle started in August 1944. The first prototype of the Sturmtiger took its baptism of fire in the suppression of the Warsaw uprising. Later, this vehicle was captured by the Red Army and is currently on display in Kubinka museum near Moscow. Serial vehicles fought on the Western front, including battles in the Ardennes. One of the serial Sturmtigers is on display at the German Panzer Museum in Munster. 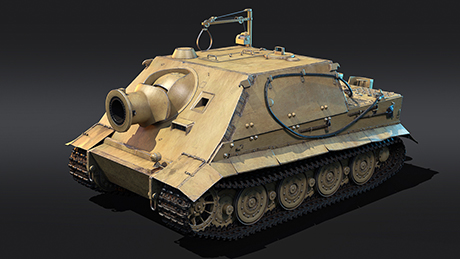 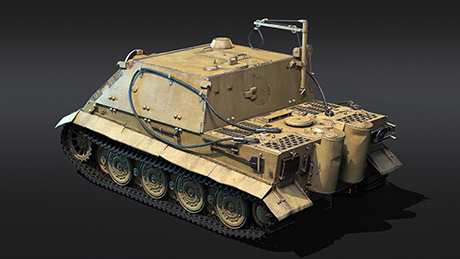 The 38 cm Sturmmörser self-propelled gun, better known as the Sturmtiger, will be the main prize in a special event dedicated to the 10th anniversary of War Thunder. This self-propelled mortar on the chassis of a Tiger heavy tank was designed to destroy buildings and fortifications using devastating 380mm rockets. What Sturmtiger is capable of in War Thunder? Let us see!

The Sturmtiger stands out by an absurdly short gun for an absurdly large caliber. In fact, the 380-mm rocket mortar was developed for the German navy, but it turned out that on the ground the amazing destructive power of this weapon could be used too. The mortar fires self-propelled projectiles - in fact, rockets - that gain speed not only due to pressure and bore rifling, but due to their own jet propulsion. In War Thunder, the Sturmtiger will have only one type of round, a huge high-explosive rocket, which, scoring a direct hit, will almost certainly destroy any target. However, it will take a lot of practice to hit your targets, due to the uneasy ballistics of the giant rockets - the rangefinder is of good use here. In addition, the massive rocket launcher is unable to elevate the gun efficiently (0deg-65deg), and horizontal traverse angles are poor (3 deg each way). This means that you will have to mainly turn the hull to acquire your targets.

The Sturmtiger is built on the chassis of the Tiger ausf. E and due to the increased weight is somewhat less mobile. The armor of the turret’s front is made of 150mm armored steel sheet at an angle of 45 degrees and is able to withstand or ricochet most kinetic rounds at its rank. Self-propelled gun’s ammunition is 14 rockets: one in the barrel, one on the feeder and six on the left and right sides of the fighting compartment. The reload time of the actual Sturmtiger took several minutes, which is nonsense in the game. The reload time of the Sturmtiger in War Thunder will be the longest in the game (40 sec. with an aced crew), but sufficient for an active gameplay. Taking into account the very long reload time and the deadly power of 380-mm rockets, the ammunition load will almost always last until the end of the battle.

The Sturmtiger was created for urban battles, but can also be effective in hills and woods. But you’d better to avoid hits in the lower front plate, which is only 100 mm at blunt angle. Also, remember that the rocket in the barrel could detonate when hit.

The legendary Sturmtiger is a wonderful prize for the anniversary of a wonderful game! Stay tuned for the full list of special events dedicated to the 10th anniversary of War Thunder and don't miss the chance to get a unique SPG in your collection!

Well, this ought to be fun, here's to hoping the event isn't an extremely painful one cause we can all agree nearly everyone will want this

I'll be so sad if this is hard to get cuz I work full time : ( I can't just grind out wt anymore

ITS HERE OMG ITS HERE

I hope this event will be similar to the old Katyusha event. With a fairly easy but unique task.

I hope theres something Yugoslavian for once