The Mirage 2000C-S5 is a further development of the well-known Mirage series of French jet fighters and represents the successor to the popular Mirage III preceding it. Coming to War Thunder as part of the Drone Age major update, seasoned French pilots may look forward to the arrival of the Mirage 2000C-S5 as the new crowning jewel of the French aviation tree in the game!

Briefly: A later development of the Mirage jet fighter, focused on multirole capabilities and equipped with a wide assortment of advanced weapons.

Development of the Mirage 2000 began in 1972 under the project name “Delta 1000”, in parallel with Dassault’s ongoing high-priority ACF (Avion de Combat Futur) project, which saw a development of a variable geometry wing interdictor jointly developed with Great Britain. However, after the French government canceled the ACF project in 1975 and subsequent variants of the project failed to gain the interest of the French Air Force, Dassault resorted back to the more traditional aircraft developed under the Delta 1000 programme, then known as Mirage 2000.

In French service, the Mirage 2000 took part in many conflicts of the 1990s, starting with the Gulf War and the subsequent Balkan Wars. The Mirage 2000 also took part in Allied operations in Afghanistan and assisted in enforcing a no-fly-zone in Libya during the 2011 French intervention. 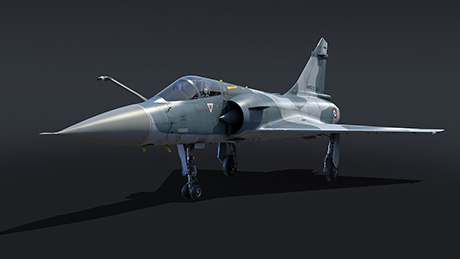 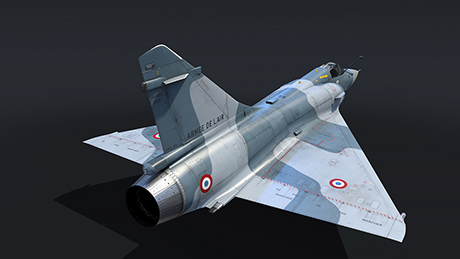 In War Thunder, the Mirage 2000C-S5 will become the new top jet fighter awaiting veteran pilots at rank VII of the French aviation tree after the release of the next major update, Drone Age. Going back to its iconic delta wing design and offering numerous improvements both concerning its flight characteristics as well as firepower, the Mirage 2000C-S5 will be a welcome upgrade for fans of the French original!

Discontinuing the transition over to more conventional swept wings as is the case with the preceding Mirage F1, French engineers took on a more ‘back to the roots’ approach with the Mirage 2000C-S5, resulting in a design more akin to that of the earlier series aircraft and one that’s instantly recognizable by keen-eyed War Thunder pilots. However, underneath the metal skin also lay a few more upgrades to the aircraft. Namely, the Mirage 2000C-S5 is equipped with a substantially more powerful SNECMA Atar M53-P2 turbofan engine, generating up to 9,500 kgf on afterburner and thus resulting in a top speed of 2350 km/h and boosts up a climb rate to 200 m/sec! The more powerful engine, combined with the improved design of the delta wing gives the Mirage 2000C-S5 better handling characteristics, particularly at lower altitudes and shortens the required take-off distance.

In terms of firepower, a pair of 30 mm DEFA cannons with 125 rounds of ammunition per barrel traditionally form the backbone of a Mirage’s arsenal and the Mirage 2000C-S5 is no exception. Fast-firing and hard-hitting, these cannons ensure the Mirage is capable of engaging its enemies, even when the suspended weapons have been used up. But speaking of suspended ordnance, did the Mirage 2000C-S5 get any upgrades in this regard you may ask?

The Mirage 2000C-S5 is on final approach and is expected to arrive in player hangars as part of the next Drone Age update. In the meantime, make sure to keep a close watch on the news as we continue releasing more information about what other exciting new additions and features await you in the upcoming Drone Age update. Until then, clear skies and happy hunting pilots!