Andrea Doria is one of the two dreadnought battleships constructed for the Regia Marina in the early 1910s and represents an improved version of the preceding Conte di Cavour class. Seasoned Italian captains in War Thunder may look forward to commanding the powerful Andrea Doria as it docks in player ports with the arrival of the next major update Drone Age!

While Italy was ramping up its construction of dreadnought battleships in the early 1910s, the decision was made to construct another two battleships in order to meet its naval rearmament goals. As ships of the Conte di Cavour class were already under construction at the time, shipbuilders decided to base the new class off the design of the former, while only applying some minor changes. This design was completed within six months and construction was ordered in September 1911.

Andrea Doria was laid down in March of 1912 in the Spezia dockyards and was subsequently launched the following year. However, it wouldn’t be until 1916 before the warship was considered complete. This was due to numerous delays in the fitting out period, primarily due to difficulties in the supply of the ship’s primary battery guns which caused significant delays. Nonetheless, the ship did see completion and officially joined the ranks of the Regia Marina in August 1916.

Despite entering service in the middle of WWI, Andrea Doria didn’t see much combat action as the primary adversary - the Austro-Hungarian navy - operated in the Adriatic. However, as the Italian navy deemed the danger of submarines and minelayers for capital ships to be too great in the narrow waters of the Adriatic, most ended up not being deployed for extensive combat operations in that particular theater.

As a result, Andrea Doria survived The Great War without great incident and continued its service into the postwar period. In this time, it helped suppress a rebellion in Fiume and undertook several diplomatic missions to a number of ports in the Mediterranean and Black Sea. In August 1932 however, Andrea Doria was withdrawn from active service and placed in reserve. Starting in 1937 and going into 1940, Andrea Doria underwent a full reconstruction, which drastically changed the warship’s visual appearance and combat capabilities. 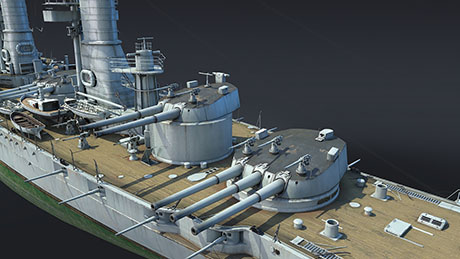 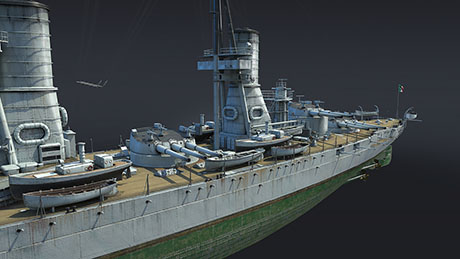 In War Thunder, Andrea Doria will be a new battleship arriving to the top ranks of the Italian naval tree following the release of the next major update Drone Age. Being the second battleship to join the ranks of the Regia Marina in the game, Andrea Doria will, among other improvements, most notably bring with it a substantial upgrade in firepower over the preceding Dante Alighieri - an upgrade that many captains will surely appreciate.

Similar to the familiar Dante Alighieri, Andrea Doria is primarily armed with 305 mm (12’’) guns. However, not only does the latter possess one additional primary battery gun, but their layout is vastly different than that found on Dante Alighieri. Namely, the guns on the Andrea Doria are split between three triple and two twin turrets, giving the ship a rather unique gun layout when it comes to naval vessels in War Thunder. However, the differences don’t stop there. Andrea Doria also features a vastly improved secondary battery. Unlike Dante Alighieri, its successor packs up to 16 152 mm (6’’) cannons, situated in casemates above the ship’s main belt armor on either side.

Additionally, Andrea Doria’s secondary weapons are complemented by 13 76 mm (3’’) cannons as well as two submerged 450 mm torpedo launchers. Crucially however, Andrea Doria’s anti-aircraft arsenal also saw an improvement over Dante Alighieri. Namely, the ship is fitted with an additional six 76 mm AA guns as well as a pair of automatic 40 mm anti-aircraft cannons. While this will by no means enable Andrea Doria to take down entire waves of attacking enemy aircraft single-handedly, it does improve its self-defense capabilities drastically.

In terms of armor protection, Andrea Doria features some similarities to the preceding Dante Alighieri in this regard. In fact, the warship is fitted with a 250 mm belt armor - identical to its predecessor. However, the plating on the turret fronts, for instance, is increased up to 280 mm. This slightly improved armor scheme coupled with a greatly increased complement of 1,260 sailors and officers makes the Andrea Doria a quite tough opponent to take down, regardless of the circumstances.

However, as is the case with many battleships of this type, Andrea Doria can’t boast about its mobility. With its propulsion system generating around 34,000 horsepower, the vessel can reach a top speed of just 21 kts (40 km/h). As a result, captains will need to be mindful of their maneuvering and keep in mind that evasive actions aren’t as easily performed by this ironclad as it may be the case with a cruiser.

The highly anticipated Andrea Doria is soon docking in players’ ports with the release of the next major update coming soon to War Thunder. In the meantime, be sure to keep scanning the horizon for more news as we continue sharing the latest on what the upcoming update has in store for you. Until then, calm seas and happy hunting captains!