The F4D-1 Skyray project started as a flying wing fighter aircraft and was intended for the 1947 high-speed high-altitude carrier-based interceptor competition. With the clarification of the requirements and after the initial tests, the fighter acquired a more traditional layout with a fuselage protruding in front of the deltoid wing, and instead of the planned two engines, one was mounted. The prototype made her maiden flight in January 1951, and was accepted into service only in April 1956. During testing, the fighter set several national and world speed and climb rate records, including the world absolute speed record in October 1953, accelerating to 753.4 mph (1212 km/h). 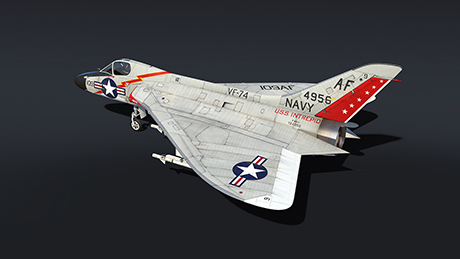 The F4D-1 Skyray will become one of the main prizes in the War Thunder “Summer Quest” marathon. The first ever supersonic carrier-based fighter will appear in the American aviation tech tree at rank VI. The unusual shape of the wing, which really looks like a manta ray, and advanced wing lift devices make it possible to keep the turn and roll time approximately at the level of other rank VI fighters, but the climb rate of the F4D-1 Skyray is really astonishing at her rank - over 90 metres per second! At the same time, in afterburner mode, the F4D-1 is capable of accelerating to transonic speeds at sea level.

The F4D-1 Skyray's armament consists of four forward-facing 20mm Browning-Colt Mk12 Mod.0 cannons. In addition, the pilot will be able to use the custom weapon setup menu to combine FFAR pods (up to 114 unguided rockets in total) and up to 4 AIM-9B Sidewinder air-to-air missiles in various combinations. It is worth noting that for its early years of service, the fighter is equipped with a radar.

The F4D-1 Skyray is the main aviation prize of the War Thunder summer marathon "Summer Quest". This elegant fighter with excellent climb rate and good firepower can be obtained just by playing the game!