SMS Bayern was the lead ship of the last class of dreadnought battleships built for the Imperial German Navy during WWI. Armed with heavy main battery guns and shielded by strong armor, SMS Bayern will soon be making an appearance in War Thunder naval battles, docking in player ports with the arrival of the next major update!

Briefly: The most advanced German battleship from the WWI-era, sporting immense 380mm main caliber guns and strong protection to boot.

In the early 1910s, it became evident to the German Navy that other navies were moving to guns larger than 12’’ (305mm). As a result, studies were prepared for battleship designs incorporating several different larger gun calibers, ranging from 350mm to 400mm. As the intermediate designs proved to be unviable, shipbuilders came up with a new design incorporating 380mm guns which subsequently got approved in 1912 as the design for the next series of battleships to be built for the navy.

Funding for a total of four of these new battleships was secured through a series of naval laws, but only two ships would actually see completion. Apart from Bayern as the lead ship of the class, Baden, Sachsen and Württemberg were also ordered for construction. Bayern was laid down in December 1913, launched in 1915 and completed in July 1916. Although Bayern was only about a month late to participate in the historic Battle of Jutland, the battleship did take part in some of the last major operations of WWI.

During Operation Albion in late 1917, the German offensive to secure the West Estonian Archipelago, SMS Bayern was to assist the offensive by shelling coastal batteries. Whilst maneuvering into position however, the battleship struck a mine and was later on forced to return to Kiel for extensive repairs. This also proved to be the final major operation in which Bayern took part. After the end of WWI in November 1918, most ships of the German High Seas Fleet were interned at Scapa Flow until a formal peace treaty was signed. Fearing that the remaining German fleet could be seized by the British, the commander of the interned German vessels issued scuttling orders on 21st June, 1919. SMS Bayern was also lost in the execution of this order. 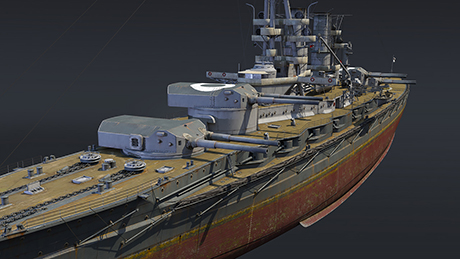 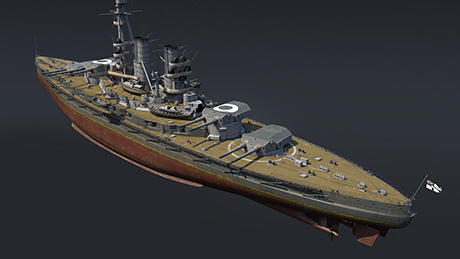 In War Thunder, SMS Bayern will be a new battleship joining the top rank of the German bluewater fleet following the release of the next major update. Sporting the heaviest primary battery of any warship currently present in the game, Bayern’s offensive capabilities are brilliantly complemented by a strong armor scheme, making it a formidable new opponent arriving soon to naval battles!

After its arrival to the game as part of the upcoming major update, the Bayern will set a new record for possessing the largest gun caliber in any combat vehicle in the game, challenged only by HMS Hood’s 381mm guns. Namely, sporting a primary battery of eight 380 mm guns, split between four twin turrets, Bayern is more than capable of breaching through the armor of other battleships at everything but extreme engagement distances. However, aside from the primary guns, Bayern also has a number of other weapons in its arsenal. For instance, the secondary battery of the warship consists of eight 150mm cannons situated in casemates above the main armored belt on each side of the ship’s hull. Furthermore, Bayern also has access to a total of five 600mm torpedo launchers, with two submerged launchers on each broadside and one on the bow, presenting an unexpected surprise for any foe that dares getting too close to this juggernaut. Lastly, Bayern is also fitted with two 88mm AA cannons, although their effectiveness may leave much to be desired, especially during close-range engagements with attacking aircraft.

Inheriting much of the general armor layout of the Kaiser - a warship already familiar to seasoned War Thunder captains - the Bayern improved upon it by thickening certain parts of the armor scheme protecting vital components. For instance, whilst the main armored belt and conning tower remained 350mm thick, the turret faces and barbettes were increased to 350mm in thickness as well. As a result, the overall protection of the vessel and its complement of 1,276 sailors increased. Moreover, the crew is now better protected by the increased to 250mm thickness of the upper armor belt. However, the heavy weaponry and strong armor naturally brings with it the drawback of high displacement and, as a result, low mobility. To compensate for the increased mass, a 25% more powerful power plant was installed, which made it possible to keep the speed in the formation up to 22 kts (40.7 km/h).

Bayern is already making its way to War Thunder naval battles and is expected to dock in player ports following the release of the next major update. In the meantime, keep your binoculars close at hand and continue scanning the horizon for news as we release more information about the upcoming update. Until then, calm seas and good hunting captains!