The VBC (Pt 2) is a prototype of the modern Italian Freccia IFV, developed on the basis of the Centauro combat vehicle in the late 1990s. Based on the same chassis, yet offering completely different combat dynamics, the VBC (Pt 2) will soon reinforce the higher ranks of the Italian ground forces tree as it arrives to War Thunder as part of the next major update!

Briefly: The early design of an Italian IFV developed on the basis of the appraised Centauro combat vehicle.

Following the procurement of the Centauro into service by the Italian armed forces, the designer consortium, made up of the IVECO and OTO Melara companies, continued work on the design in an effort to create further, complementing variants. One such variant would be conceived as an IFV, equipped with a further developed turret used on the tracked Dardo IFV, which would later become the Hitfist turret.

Based on a modified Centauro chassis and fitted with the new turret designed by OTO Melara, the first prototype of the new IFV design was constructed and handed over for testing to the Italian army in 1996. As the testing was deemed successful, the Italian army placed an initial order calling for 249 units of various modifications to be manufactured in 2006, thus officially adopting the design into service. Simultaneously, the new vehicle received the official designation ‘Freccia’ (eng. Arrow) in Italian service.

The Freccia represents the spearhead of the Italian light armored units and is among the most advanced vehicles in service with the Italian forces. Outside of the military exercises, the Freccia has not taken part in any active combat operations and Italy remains its sole operator as of the present day. 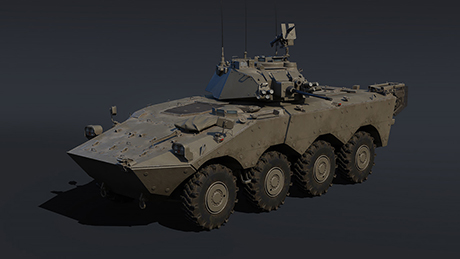 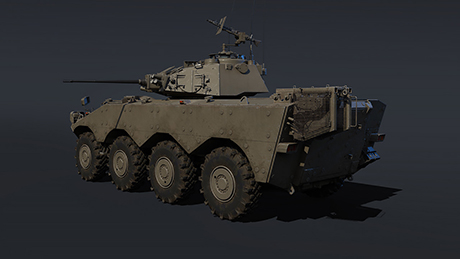 In War Thunder, the VBC (Pt 2) will be a new light vehicle complementing the already excellent lineup of Italian wheeled combat vehicles, found at the higher ranks of this nation’s ground forces tree. Being based on the Centauro chassis, and fitted with a rapid-firing autocannon, this highly nimble predator is sure to mix things up for Italian tankers with its arrival as part of the next major update coming to the game. Sounds interesting, why don’t we take a closer look, shall we?

As already mentioned, the experimental VBC (Pt 2) is a prototype of the Freccia IFV and also a further development of the B1 Centauro - a vehicle already most familiar to seasoned tankers in War Thunder. Inheriting most of the Centauro’s chassis design makes the VBC (Pt 2) just as mobile as its close relative. In fact, thanks to its 550 hp engine, the VBC (Pt 2) can reach a top speed of 110 km/h on paved roads, thus being in line with the B1 Centauro. However, thanks to the slightly more powerful engine and despite its marginally higher mass, the VBC (Pt 2) has a higher power-to-weight ratio. As a result, the vehicle is able to reach its top speed faster and more easily traverse even less hospitable terrain types.

Unlike the Centauro it’s based on however, the VBC (Pt 2) is equipped with the turret fitted to the familiar Dardo IFV. As a result, the VBC (Pt 2) comes armed with a 25mm Oerlikon KBA cannon, capable of firing advanced sub-caliber munitions. Therefore, despite the cannon’s rather modest caliber, the VBC (Pt 2) can become a considerable threat to even more heavily armored opponents provided that its aspiring commanders are audacious enough to really close in on their prey. Despite being equipped with an updated Dardo turret however, the VBC (Pt 2) doesn’t get access to turret-mounted ATGM launchers as found on its tracked counterpart. While this does limit the vehicle’s effectiveness against armored targets at longer engagement distances, its fast-firing autocannon remains a formidable threat to other light vehicles as well as low-flying aircraft and helicopters.

Being based on the Centauro’s chassis also means that the VBC (Pt 2) inherited much of its relative’s protection. Tankers should avoid relying on the vehicle’s armor to shield them from enemy fire. Instead, it’s a much better tactic to be more proactive and make good use of the vehicle’s excellent mobility to stay out of the enemy’s sight and remain an elusive target on the battlefield for the enemy.

The VBC (Pt 2) is soon arriving to rank VI of the Italian ground forces tree as part of the next major update, coming soon to War Thunder. In the meantime, stay sharp and keep an eye out on the news as we continue unveiling what other exciting new vehicles and features await you in the upcoming update. Until then, good hunting tankers!

You can greatly speed up the research on this vehicle with M60A1 "D.C.Ariete" available in game for Golden Eagles