The G6 Rhino is a wheeled self-propelled gun, developed by South Africa during the 1970s in an effort to modernize the outdated inventory of their artillery regiments at the time. Soon, the G6 Rhino will charge head first into the heated ground battles of War Thunder as it arrives to the game as part of the next major update!

Throughout the 1960s and going into the 1970s, the SADF largely still relied on dated artillery systems from the WWII-era such as the British QF 25-pounder cannon and Sexton SPGs. Recognizing this issue, the military began formulating modernization plans in 1968 which were subsequently formalized in 1973. Shortly afterwards, the SADF procured more modern artillery units such as the American M1 and a version of the Canadian GC-45 155 mm howitzer, designated G5 under SADF service.

However, the SADF also wanted to procure a self-propelled version of the G5 howitzer. To this extent, a project was launched in the late 1970s to fit the G5 cannon into an enclosed turret and mount it onto a highly mobile wheeled chassis. Work on the project commenced in 1979 at the ARMSCOR company, eventually resulting in the G6 Rhino. The first prototype of the vehicle was completed in October 1981 with a total of four being manufactured by 1987.

Immediately after rolling off the factory floor, this initial batch of G6s were pressed into service during the South African Border War. During this period, the G6 underwent its baptism by fire and proved its capabilities during combat operations against Angolan forces, being particularly noted for its excellent mobility and ability to quickly shift positions between fire missions. After the initial deployment, full scale production of the G6 commenced in 1988 and lasted until 1994.

By the end of the production run, a total of 154 G6s were manufactured of which 78 were exported to the UAE and another 24 to Oman. Since the late 1980s, the G6 didn’t see any further combat action with South African forces, but it did take part in operations with the UAE armed forces in Yemen since 2015. 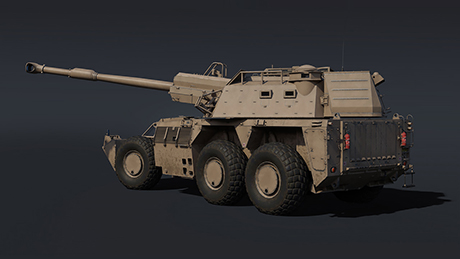 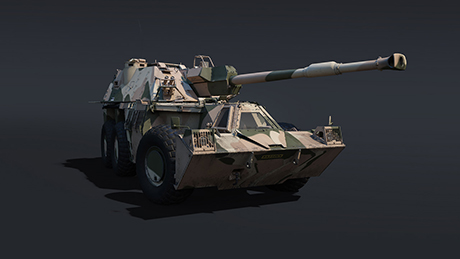 In War Thunder, the G6 Rhino will be a new SPG reinforcing rank IV of the British ground forces tree with the release of the next major update. The G6 Rhino will offer its prospective commanders a devastating destructive potential, only found with such high-caliber artillery pieces, while combining it with signature superb mobility that South African combat vehicles are known and feared for by tankers in the game.

The centerpiece of attention with the G6 Rhino is most certainly its potent 155 mm G6 canon. Featuring excellent ballistic properties, even for a howitzer, gives commanders the ability to quickly and easily engage hostile targets, even at longer distances. Furthermore, the heavy high-explosive rounds (regular and remote fuse) ensure a good effect on target even if tankers miss critical components which may have led to complete destruction of the enemy. However, commanders should also be aware of some of the gun’s limitations, such as a rather lengthy reload time as well as the limited horizontal traverse to just 40° to either side of the vehicle’s horizontal axis.

However, while the G6 Rhino can bring a quick, yet untimely demise to many of its foes on the battlefield, it’s worth noting that the Rhino itself is quite susceptible to enemy fire due to its light protection. In fact, the G6 is only adequately protected to, at most, withstand direct hits from AP rounds fired from low-caliber automatic cannons. As a result, taking the G6 into the thick of the action is a risky tactic. Therefore, tankers are better advised to keep their distance to enemy units and utilize the Rhino’s excellent gun to deliver a devastating strike from a safe distance.

Yet, despite being safer to engage from a longer distance, aspiring Rhino commanders don’t necessarily need to take part in the fighting from the second lines.

Commanders may also utilize the vehicle's superb mobility - a signature feature of nearly all South African combat vehicles in the game - to position themselves on the flanks and surprise slower advancing enemy forces with precise and deadly high-caliber fire. This tactic doesn’t come without its own risks, but at least commanders might have the element of surprise on their side in this scenario compared to a full frontal brawl in densely packed urban environments.

The G6 Rhino will soon make an explosive appearance in War Thunder ground battles as it arrives to the British midranks with the release of the next major update. In the meantime, make sure to stay tuned to the news as we continue sharing with you some of the highlights awaiting players in the upcoming update. Until then, happy hunting tankers!